Despite the overarching fear imposed by the coronavirus outbreak that is now gripping all corners of the Western world, companies around the world still took to the Internet to ‘celebrate’ April Fool’s Day — presumably to lighten the mood. 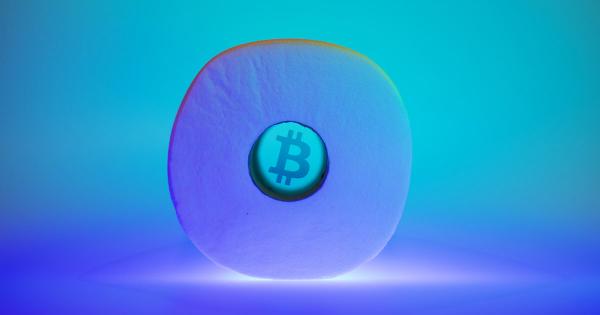 Despite the overarching fear imposed by the coronavirus outbreak that is now gripping all corners of the Western world, companies around the world still took to the Internet to ‘celebrate’ April Fool’s Day — presumably to lighten the mood.

Crypto startups, too, joined in on the fun.

Here are some of CryptoSlate’s favorite Bitcoin-themed pranks from April 1st.

Out with Bitcoin, in with Toilet Paper Token?

CoinMarketCap, just acquired by Binance for a reported $400 million in equity, kicked it off by ‘launching’ a token: the Toilet Paper Token, which can be purchased through one “Shitake Exchange” and can be minted through a Know-Your-Colon (KYC) process:

TPT’s goal is to ensure the integrity of wipers around the world and to maintain the “fair distribution of toilet paper worldwide.”

The ‘asset’ traded over 1,000% higher on April Fool’s, outpacing every other crypto in existence, allowing it to unseat Bitcoin from its porcelain throne. Better yet, TPT ran out of stock, making it even more scarce than our favorite orange coin, set to see a halving in May.

In with Toilet Paper Token and out with Bitcoin? pic.twitter.com/GhvWjfwUFa

Fortunately, this crappy April Fool’s joke of a digital asset has since been unseated by Bitcoin.  In fact, it’s nowhere to be found.

Speaking of Bitcoin, Blockstream decided to ‘introduce’ the Lava Network on April 1st, a “sidechain-based settlement network for BTC transactions on Mars” seemingly based on the company’s Liquid Network.

With the ongoing push to put humans on Mars, the Bitcoin infrastructure company felt it necessary to make our favorite orange coin available on the orange planet with an orange-colored scaling solution. Hence, the Lava Network.

The company also managed to procure a number of crypto companies as partners, including Marsfinex, MarsMEX, and OKMars — all household names in the interplanetary Bitcoin ecosystem.

Unfortunately for our Mars-based Bitcoin traders, Blockstream forgot that lava (or any common liquid for that matter) doesn’t flow on Mars. Literally.

What does flow, however, is Bitfinex’s new energy drink.

In an industry filled with people that spend every one of their waking hours with their eyes glued to the Bitcoin chart, energy drinks are what get them through the day. After all, as this market trades 24/7, so too should you.

Enter Bitfinex Energy, the details of which were hard to come by, save for the below image, which depicts a can that looks eerily familiar. I can’t exactly place my finger on what it looks similar to, but the design isn’t half-bad.

Bitcoin never sleeps so why should you?
Introducing The Bitfinex energy drink, coming soon! ? pic.twitter.com/srec6JQXlh

To the disappointment of myself and others, Bitfinex has not yet disclosed the details of this delectable drink.

Maybe they’re planning an initial coin offering? Or, better yet, a global airdrop.

The U.S. dollar was usurped by Bitcoin

What wasn’t disappointing, though, was news from the totally real account of news aggregator The Spectator Index, which announced that the Federal Reserve, European Central Bank, and the People’s Bank of China — three of the world’s most powerful monetary authorities — all simultaneously ‘suggested’ that Bitcoin, not Toilet Paper Token, should be the world’s next reserve currency. 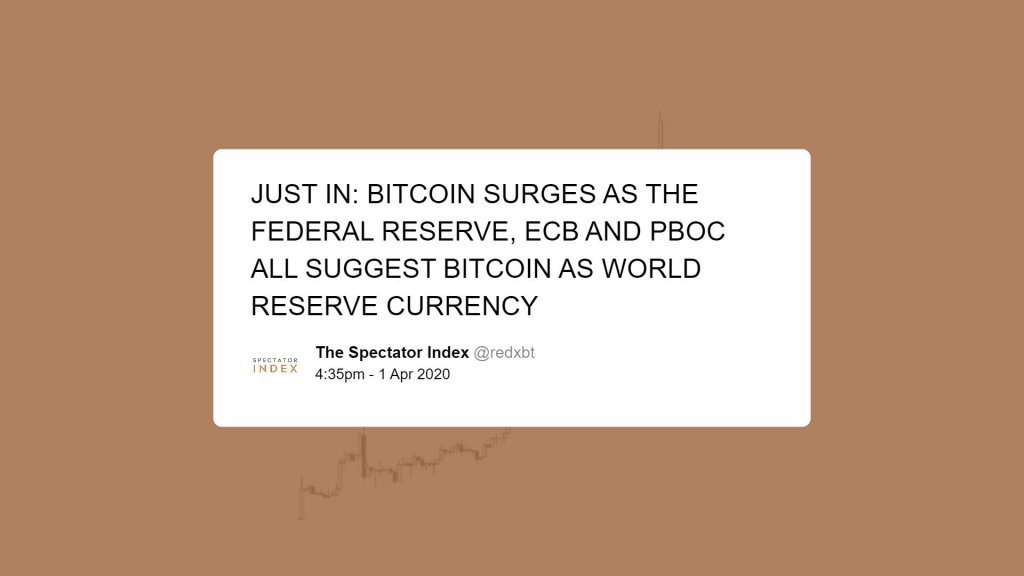 That would make Craig Wright —  ‘confirmed’ to be the creator of BTC, Satoshi Nakamoto — the de-facto emperor of the world, as wielding 5% of a global reserve currency comes with its perks, to say the very least.

We miss you Elon

Unlike last year, Elon Musk, CEO of Tesla and SpaceX, did not join in on Crypto Fool’s Day via Twitter. After all, how could he top becoming the ‘CEO’ of Dogecoin, slightly pumping the price of the cryptocurrency, then ‘retiring’ from the cryptocurrency industry all in one day?

Disclosure: This post was intentionally written as if the abovementioned announcements were real. Though, we know that is clearly not the case, as much as we would like Bitcoin to be the world’s reserve currency.