Someone donated a CryptoPunk to Ukraine, but it might be lost forever Zeynep Geylan · 4 months ago · 2 min read
Ukraine› NFTs

Someone donated a CryptoPunk to Ukraine, but it might be lost forever

Russia's invasion on Ukraine mobilized individuals all around the world in an effort to support Ukraine. After Ukraine declared they were receiving cryptocurrency donations, an impressive amount of digital assets were collected, including an NFT. 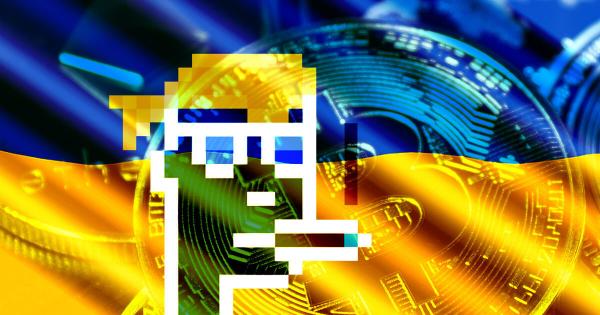 Russia entered Ukraine five days ago and has been actively attacking certain near-border cities of Ukraine. As the invasion continues without deceleration, death tolls show that more than 136 civilians have been killed, at least 10 of them being children. The current situation disturbed many around the world, who are now looking for ways to show their support for Ukraine.

A couple of hours after the invasion, the Ukrainian government announced that they were accepting donations in Bitcoin, Ethereum, and USDT.

Since then, the Ukrainian government received more than $22 million worth of assets, some in bulk from crypto geniuses like Gavin Wood. Moreover, this is not the only channel where crypto users can support Ukraine. Even though Ukraine legalized the usage of Bitcoin before the invasion started, the Ukrainian deputy prime minister still mentioned that they can not accept cryptocurrencies as official donations by saying:

“National legislation does not allow the Ministry of Defense of Ukraine to use other payment systems (“Webmoney,” “Bitcoin,” “PayPal,” etc.).”

Few Ukrainian NGOs emerged after this statement who collect cryptocurrency donations to aid the Ukrainian army. In addition to the amount collected by the government, these NGOs also collected more than $4 million.

Contributing to the growing donations, someone transferred a CryptoPunk to the Ethereum donation address of the Ukrainian government to show their support for Ukraine. A few hours later, it was determined that it was CryptoPunk #5364 is the one that was sent as a donation.

#cryptopunk #5364 is now owned by the government of the #Ukraine. pic.twitter.com/6SdIgl2zM2

Even though it’s devastating, Russia’s attack on Ukraine brought a new level of awareness to cryptocurrencies. The fact that cryptocurrency transactions have become smooth, cheap, and secure all played a role in the volume of the collected donation amount. The world was able to unify and mobilize easily and effectively to show its support for Ukraine.