Popularly known as “Mr Wonderful,” O’Leary was earlier skeptical about the crypto sector but he seems to have turned around on that thought. 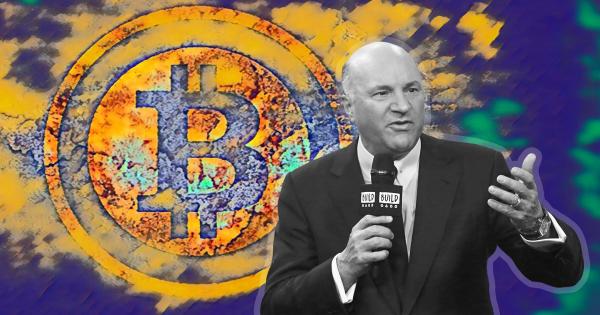 Popularly known as “Mr Wonderful,” O’Leary was earlier skeptical about the crypto sector but he seems to have turned around on that thought.

Kevin O’Leary is the latest high-profile investor to do a 180-turn on Bitcoin. He revealed an investment into the asset in a tweet yesterday, despite holding a negative view of the digital currency sector previously.

O’Leary is popular in media and investing circles as “Mr. Wonderful,” a title made famous on the American television show “Shark Tank.” The businessman has a networth of over $400 million as of today and runs the popular O’Shares ETF product among other businesses such as O’Leary Fine Wines, a vinery.

“Is Bitcoin a currency? Property? An asset? Maybe all of the above,” said O’Leary in a tweet, referring to Bitcoin’s multiple definitions and personas over the years before turning into its now popular “digital gold” narrative.

The investor added, “I’m going with a 3% portfolio allocation and am looking at investing in miners that can create coin under a mandate of  carbon so sustainably.”

Is #bitcoin a currency? Property? An asset? Maybe all of the above, I’m going with a 3% portfolio allocation and am looking at investing in miners that can create coin under a mandate of 0 carbon so sustainably! https://t.co/qgAXZVZXzh

The Shark Tank star also said he would invest in Bitcoin mining companies with a carbon footprint of zero. “Mining”—for the uninitiated—is the process of expending computing resources to validate the Bitcoin network and receive BTC as a “reward” in return.

The sector is said to use over 121.36 terawatt-hours (TWh) a year (or what a country the size of Norway uses in a year), an occurrence that creates concerns among many critics and environmental activists.

In 2019, O’Leary said Bitcoin was “garbage” and “a useless currency,” adding at the time that the asset was largely “worthless” due to its high price volatility.

“Canadian, Swiss and many other regulators have done a 180% on $BTC. This is a game-changer for many investors including me,” O’Leary added.

#Bitcoin has outperformed #Gold by 100x over the past decade. The next decade will witness the complete digital transformation of gold to bitcoin, and the demonetization of the precious metals asset class. https://t.co/c4j060m9l0

With the comments, O’Leary becomes the second prominent investor of “Shark Tank” to dive into the crypto sector. Mark Cuban, his colleague on the show, revealed earlier this year that he is positive about the future of cryptocurrencies in general and DeFi in particular.

Cuban’s ERC-20 holdings, a doxxed wallet showed, consisted of 450 Staked AAVE (stkAAVE) tokens—which meant that Cuban was staking $126,499 worth of AAVE in January 2019. He has also had his “share of shitcoins” as well.