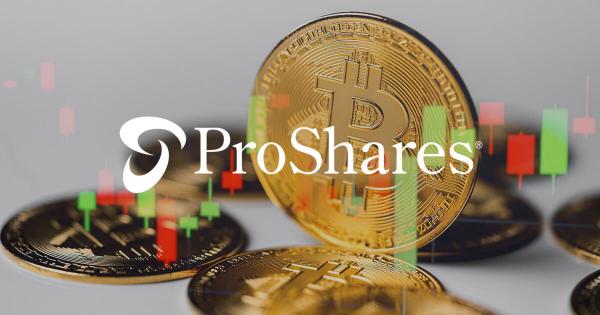 In an indication that the crypto community has been waiting tirelessly for a Bitcoin exchange traded fund (ETF), available data has shown that Proshares Bitcoin futures ETF, the first of its kind in the United States, saw a trading volume of over $1 billion in its first day of trading.

The Proshares Bitcoin ETF began trading on October 19 on New York Stock Exchange (NYSE) and its opening price was $40.88 which rose to $41.94 before the end of the day. Per information on Market Chameleon, over 24 million shares of BITO exchanged hands which translated to $1 billion in trading volume.

Speaking on this historical event, Eric Balchuna, a senior ETF analyst at Bloomberg, revealed that ProShares’ ETF could be said to be the biggest in terms  of “natural” interest.

If we don't exclude ETFs where their Day One volume was literally one pre-planned giant investor or BYOA (not natural), it still ranks #2 overall. Here's that list. The reason some of these shouldn't be included IMO is they don't really represent grassroots interest. pic.twitter.com/wmZiHnpFrS

In his words, “$BITO just about at $1b in total volume today (curr $993m but trades still trickling in). Easily the biggest Day One of any ETF in terms of ‘natural’ volume. It also traded more than 99.5% of all ETFs (incl some bigs like $DIA, $ARKK, $SLV). It def defied our expectations.”

Balchunas continued that “If we don’t exclude ETFs where their Day One volume was literally one pre-planned giant investor or BYOA (not natural), it still ranks #2 overall.”

Another indication that ProShares ETF performed wonderfully well in its first day were reports that there was around $570 million inflow into the ETF on its first day.

This means that the ProShares ETF would rank high when it comes to year-one net flows for a first-to-market single commodity ETF.

However, despite all of the glowing reviews and remarks the ProShares ETF has gotten from the community, Balchunas hinted that this could serve as trouble for other crypto ETFs that are on the line as “once an ETF gets known as ‘the one’ and has tons of liquidity, it’s virtually impossible to steal,” while notifying others that “Time is of the essence. Every day counts…”