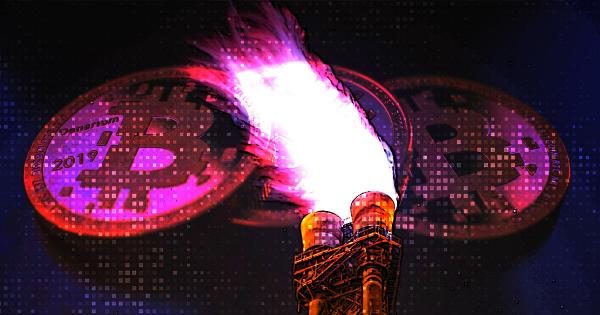 Exxon Mobil uses excess natural gas to mine Bitcoin from oil wells in North Dakota. The waste gas would usually have to be burnt off in a process known as flaring. However, it is being repurposed to mine crypto using shipping containers filled with Bitcoin miners. Exxon has partnered with Crusoe Energy, a company backed by the Winklevoss Twins, to create the farms. Crusoe company president Cully Cavness said,

“Our systems reduce greenhouse gas emissions by the equivalent of hundreds of thousands of cars in the process, primarily by reducing the amount of methane escaping into the atmosphere from incomplete combustion in flares.”

From flaring to farming

The lack of pipeline infrastructure around the oil wells in the area means that companies cannot ordinarily harness the gas in any practical way. The carbon dioxide produced from flaring is estimated to make up around 25% of all CO2 produced by the oil and gas industry. This equates to approximately 281 million tons of CO2 annually. Devastatingly, about 5% of the world’s gas consumption is used up by flaring. Around 110 billion cubic meters or enough to power 72 million homes for a year is wasted through the process.

Texas Railroad Commissioner Jim Wright also promoted cryptocurrency mining to “eliminate the vast majority of flaring emissions and even pay the operator for the gas.” According to Bloomberg sources, Exxon Mobil is unsurprisingly looking to expand its Bitcoin mining activities. Further pilots in Alaska, Nigeria, and Argentina are in the works. Nigeria currently flares 76% of all the natural gas produced each year. Exxon Mobil has to pay fines for not meeting emissions targets due to flaring each year. By mining Bitcoin, they can reduce their penalties and generate income through holding Bitcoin. However, unless you are a shareholder in Exxon Mobil, the good news for the rest of us is that this can reduce CO2 emissions by over 60%.

How much Bitcoin has Exxon Mobil mined?

Amazingly, their on-site shipping container Bitcoin mines are capable of mining up to 37 BTC per month based on the reported energy usage. The average energy needed to mine 1 BTC is around 142,498 kWh which means we can predict Exxon has made $24,419,445 by mining BTC since last January. Using the new Antminer S19XP 140T that Bitmain selected Crusoe Energy to pilot, that figure could be as high as 1,261 BTC or $55,490,819. While all those figures are merely pocket-change for a company reporting profits of over $8 billion per quarter, it is an excellent use of energy that would otherwise be wasted.

More wasted energy than all of Bitcoin combined

However, to put all of this into perspective, the energy wasted each year on flaring equates to 1.1 trillion kWh of energy. That is enough to mine 18.4 million Bitcoin (ignore network difficulty to make the maths easier). As of today, 18.9 million have been mined. That means in one year the oil industry wastes as much energy as the entire Bitcoin blockchain ledger. The figures aren’t 100% accurate as I haven’t adjusted for the increase in network difficulty but the point remains. Before we focus all of our energy on banning proof of work coins perhaps we can take a look at industries that are literally throwing energy away? It is great that oil companies are reducing their greenhouse gas emissions now that there is a way to profit from it but we have a long way to go.