Statistically most cases never reach trial, even so, Ripple remains steadfast in pushing for its day in court. 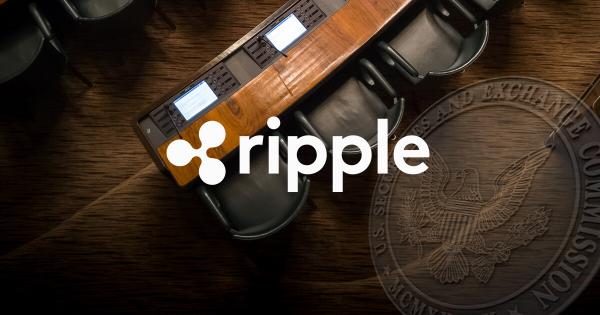 The Securities and Exchange Commission (SEC) vs. Ripple lawsuit is currently in the pre-trial phase. The purpose is for each party to investigate the facts of the case by obtaining evidence from the opposing party and others through discovery devices.

According to Attorney Jeremy Hogan, due to resource pressures, only a small percentage of cases ever reach trial. This suggests the SEC may try to settle with Ripple.

Then again, considering what’s at stake and how the discovery phase has favored the Defendant on balance, it should come as no surprise that the Ripple CEO wants this case to set a legal precedent.

Partner at Hogan and Hogan, Jeremy Hogan, although not directly involved with the Ripple lawsuit, has emerged as a knowledgable observer of the case.

Hogan has offered his professional opinion on the subtleties of the SEC’s allegations that Ripple sold unregistered securities over an eight-year period.

Yesterday, Hogan dropped the bombshell that less than 10% of civil and criminal cases ever reach trial. This is because the U.S. legal system is unable to handle a higher throughput of cases. He added that judges aware of this fact tend to pressure lawyers to settle.

“A little secret of the U.S. Court system: not even 10% of cases can be tried. Judges are always pressuring lawyers to settle because the truth is the system would collapse if more cases had to be tried. There simply aren’t enough resources. True for both civil and criminal cases,” he tweeted.

A little secret of the U.S. Court system: not even 10% of cases can be tried. Judges are always pressuring lawyers to settle because the truth is the system would collapse if more cases had to be tried. There simply aren't enough resources. True for both civil and criminal cases. https://t.co/cFCajnnz3e

Ripple wants the case to go to trial

When news of the lawsuit broke in late December, Ripple CEO Brad Garlinghouse called the action an attack on the whole cryptocurrency industry.

He also said he, along with Ripple chairman Chris Larsen, were given the option to settle. But given his strength of conviction, he turned this down to prove his case and pave the way for the rest of the crypto industry.

“Chris and I had the option to settle separately. We could do that, and it would all be behind us. NOT happening. That’s how confident Chris and I are that we are right. We will aggressively fight – and prove our case – through this case we will get clear rules of the road for the industry here in the U.S,” said Garlinghouse at the time.

Throughout this process, oddities on the part of the SEC have emerged, including disregard of XRP investors, failure to act sooner, and possible conflicts of interest from former SEC leaders.

Meanwhile, tech writer Roslyn Layton points out that a “Ripple test” is needed as payback for the SEC’s “bad behavior” and overreach in bringing this case:

“Some investors want to punish the SEC for its bad behavior and reduce the temptation for it to abuse its authority in the future. In any event, the SEC needs its own “Ripple Test” to restore its credibility.”

While there’s no telling how a trial will pan out, Garlinghouse is justified in wanting to have his day in court.