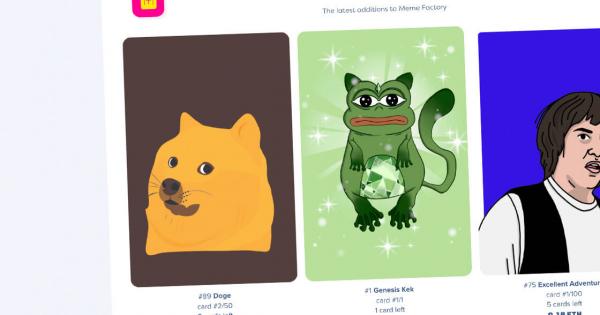 A new Ethereum-based digital collectibles market called Meme Factory went live this week. The platform was created by district0x, a network of decentralized marketplaces behind the DNT token, and will allow users to create, issue, and trade rare digital collectibles.

Meme Factory will enable its users to create original memes that can be tokenized. Every meme created on the platform will be submitted for consideration to the “Dank Registry.” The registry will be run by curators, who are also the holders of the platform’s native DANK token and decide on what memes make it to the platform.

According to District0x, Meme Factory has been in the works for more than a year. The early-stage company managed to raise $9 million via ICO in 2017 and was backed by major venture capital firms such as Boost VC and CoinFund.

The funds enabled District0x to develop various apps and features, such as the ability to buy the memes approved for the Dank Registry using ETH. The platform will also enable users to trade and resell existing memes on secondary markets.

The company also plans on enabling developers to build websites on Meme Factory in the future. The so-called “districts” will essentially be decentralized autonomous organizations that enable posting, searching and payments.