As the entire crypto market has slingshotted higher over the past day, the Ethereum network has become congested. 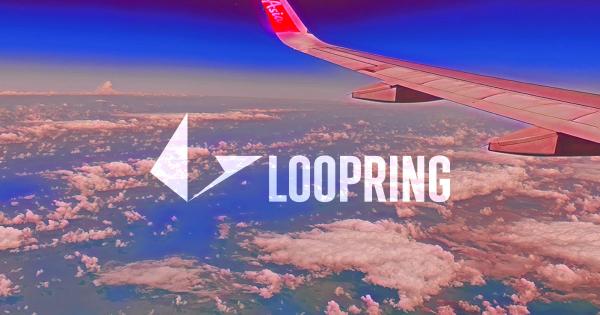 Photo by Rizki Kurnianto on Unsplash

As the entire crypto market has slingshotted higher over the past day, the Ethereum network has become congested.

The average gas fee that users were paying yesterday evening was close to 500 Gwei, meaning that just to send ETH from address to address cost $10. To put 500 Gwei into context, here are a few more statistics:

While many users could handle these fees as they were making money on their trades, users with only a few hundred dollars had to sit on their coins.

This trend resulted in a narrative developing regarding the need for Ethereum scaling solutions, especially as the next bull run seems to have arrived in full force, with retail investors getting involved.

One project appears to be benefiting from this narrative, Loopring.

Loopring is an Ethereum scaling protocol that has launched a second-layer decentralized exchange seemingly inspired by Uniswap. The protocol is based on zkRollups, a technology that attempts to migrate a majority of the transaction demand to a second layer

Loopring is seeing strong traction as Ethereum has become congested.

Investors began to take notice of Loopring when Matthew Finestone noted that it costs $0.0125 to swap LRC to ETH via the Loopring exchange, which has no gas fees.

The tweet announcing this went crypto-viral as many users expressed their concerns about spending so much on transacting on Ethereum.

Nobody is priced out on L2 ✊ pic.twitter.com/dZtHVYUgA7

Loopring also announced later that evening that the volatility had given the platform its “highest volume day ever,” with just under $2m traded.

Our highest volume day ever today on Loopring Exchange (even v1). We feel ecstatic & appreciative ?

We know this is still just small time, but imagine when Ethereum zkRollups seep into everything ? pic.twitter.com/zIfXD1eO4F

While this is far from Uniswap, which transacts over $300m each day, the market is responding by buying up Loopring’s native coin LRC.

Per CryptoSlate market data, the Ethereum-based coin is up 50 percent in the past 24 hours as it pushes to $0.33.

The cryptocurrency is now up by 70 percent in the past month and over 1,300 in the past 12 months.

The market is likely to bid the coin higher if the narrative around layer-two scaling solutions continues.

Hype around other scaling solutions grows

Hype is also growing around other scaling projects.

Optimism, an Ethereum development team, is expected to release a beta or soft version of its scaling solution called Optimistic Ethereum on January 15th.

Optimism is expected to roll out Optimistic Ethereum with support for Synthetix, the decentralized exchange and derivatives platform.

There are also rumors that Uniswap will launch some sort of layer-two test or version on Optimistic Ethereum, though this has not yet been confirmed.

The full version of the solution is expected to be released on March 15th.