Kraken will donate fees generated from Russian transactions to Ukraine

Kraken is donating a total of $10 million to help Ukraine against Russia's invasion and part of it will be funded via the fees generated from Russian transactions on the exchange. 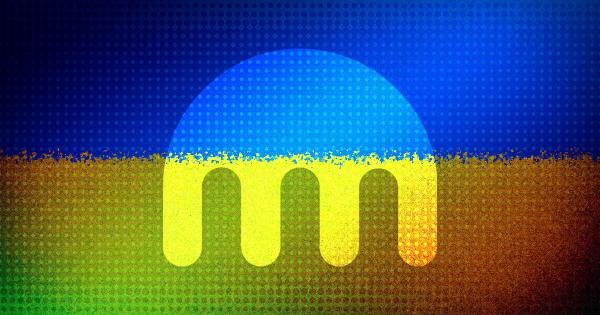 Kraken has announced it will donate an amount equivalent to total trading fees generated from Russia-based clients during the first half of 2022 to Ukraine.

The donation is part of an “aid package” worth more than $10 million that is being prepared by the exchange to support Ukraine in its efforts against Russia’s invasion. The aid package is essentially a Bitcoin airdrop organized by Kraken and is being funded via its Ukrainian revenues as well as the aforementioned fees generated from Russia-based accounts.

Kraken will distribute over $10 million worth of to aid clients in 🇺🇦Ukraine. Tranche 1 recipients will be credited $1000 of #BTC, withdrawable tomorrow. The package is funded by historical Ukraine revenues and H1 2022 revenues from Russia-based trading.https://t.co/DdkY2TsVoB

Kraken will airdrop BTC worth $1000 to all Ukraine-based accounts that were created before March 9th in the first tranche. The accounts must be at an “intermediate” or “pro” level of verification to qualify. It is unclear how many Ukrainians use the platform as that information is not public.

“The BTC amount distributed in Tranche 1 is roughly equivalent to the total fees paid to Kraken by Ukraine residents since 2013.”

The airdrop will take place on March 10th and users will be able to immediately withdraw the amount through the exchange itself. Kraken said it will waive currency conversion fees up to $1000 to facilitate users in availing the donation. Users must log in by May 1st to claim the drop.

Meanwhile, any users that don’t have an intermediate verification can apply for it to become eligible for the second tranche, which will take place April 1st. The amount to be distributed under the second tranche is yet to be decided and will be based on fees generated from Russian users during the first quarter of 2022.

For example, if Kraken clients in Russia pay $5 million in fees in Q1 and there are 10,000 qualifying accounts in Tranche 2, each account will receive $500 USD worth of BTC.

The amount to be distributed in the third tranche is also undecided and will be based on the fees generated from Russian clients during the second quarter. The amount will be determined the similar to the second tranche.

1/6 I understand the rationale for this request but, despite my deep respect for the Ukrainian people, @krakenfx cannot freeze the accounts of our Russian clients without a legal requirement to do so.

Russians should be aware that such a requirement could be imminent. #NYKNYC https://t.co/bMRrJzgF8N

The country had urged Kraken and other crypto exchanges to support the country by excluding every Russian from accessing their services, ordinary or not. However, most exchanges skirted or refused the request saying it would be unethical to take action against innocent users.

Powell went one further and said that if they were to freeze all Russian accounts because their government had initiated the invasion of another country, then logically it would also have to block every US user.

6/6 Besides, if we were going to voluntarily freeze financial accounts of residents of countries unjustly attacking and provoking violence around the world, step 1 would be to freeze all US accounts. As a practical matter, that's not really a viable business option for us.
/🧵