Former Ripple CTO continues dumping XRP from his stash on a regular basis. 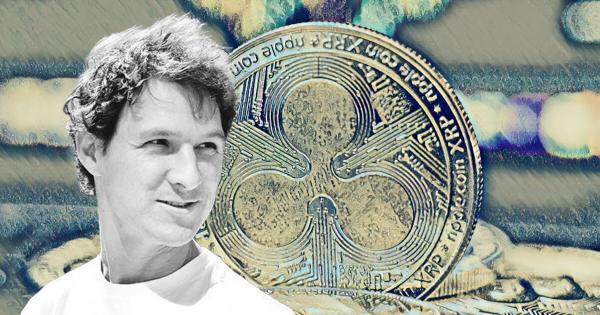 With currently over a half a billion Ripple (XRP) still remaining in his “tacostand” cryptocurrency wallet, Jed McCaleb continues dumping his stash.

Blockchain payments company Ripple sent its former chief technology officer and co-founder another payment of over 291 million Ripple tokens earlier this month, which was, according to the blockchain explorer XRPScan, the latest in a series of massive Ripple transactions sent to McCaleb.

As a part of a settlement agreement, the company has been sending McCaleb hundreds of millions of Ripple on a monthly basis and the former CTO continues dumping millions of dollars worth of it every day.

McCaleb breaks his Ripple riches into smaller batches as he continuously keeps selling the crypto in daily transactions.

In less than two weeks he sold over $62 million worth of over 101 million Ripple, at current prices.

Meanwhile, the crypto community continues keeping track of McCaleb’s transactions, predicting he’s bound to sell the rest of his Ripple in the following months, unless he changes his sell off  pattern.

I don't really agree with the Jed daily XRP dumping, his wallet is depleting and going to be empty by end of year
Also you can read more here https://t.co/HRaryqSl2s

Community ponders about “why”

After McCaleb left Ripple in 2014 over internal disagreements, he initially tried to dump all of his token holdings at once.

Most likely in an effort to preserve the token’s market price, Ripple managed to stop him from doing that by filing a series of lawsuits, which, according to the firm’s current CTO David Schwartz, turned McCaleb into a self-made billionaire despite his own best efforts.

Since the crypto community cracked McCaleb’s pattern of selling his Ripple holdings, speculations about his reasons behind it keep occupying the debate on Twitter.

He literally runs a competing protocol. It’s not a sign of a lack of faith. He wanted to sell it all when he left Ripple, but they managed to get an injunction to stop that, and instigated this incremental system.

Since he is a co-founder and chief architect of the Stellar Development Foundation, an organization founded in 2014 to support the development of the open-source Stellar (XLM) network, some believe him holding on to his Ripple riches defy his current interest.