Is the Russian-Ukrainian conflict a long-term threat to cryptocurrency?

The armed conflict between Ukraine and Russia is likely to have consequences that stretch beyond the military level, with its effects already being felt throughout the crypto space. 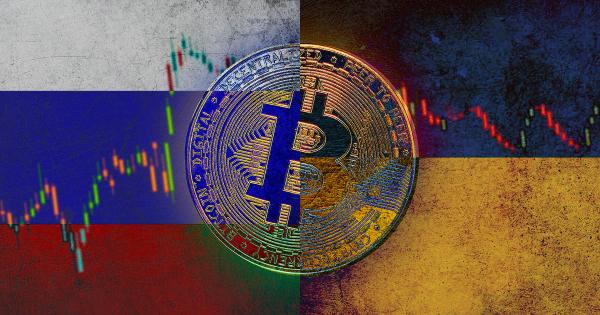 While the armed war between Ukraine and Russia may appear to be confined to a military level, it is likely to have far-reaching consequences for much of the world.

Economic analysts expect it to trigger a dramatic rise in inflation partly because Russia is the world’s biggest exporter of natural gas and second-largest seller of oil.

In addition, hundreds of thousands, if not millions, of people will be displaced from Ukraine, posing a new refugee issue for the world (and specifically Europe).

Furthermore, there’s cryptocurrency. While many people aren’t focusing on the cryptocurrency market and industry at the moment, there’s no doubt that the protracted fight will affect Bitcoin.

There is no doubt that it has already had some effects, particularly since Bitcoin dropped by more than 10% in a single day in response to the initial rumors of a Russian invasion on February 24.

Russia’s potential escape from sanctions by using crypto may result in increased regulation of the business in the West, but the conflict may benefit the market.

This is mainly because it illustrates how cryptocurrencies, including Bitcoin, can boost great causes and empower individuals when other avenues are unavailable.

Those in need can benefit from cryptocurrency in real-world situations

Since the initial assault, the market has reassuringly stabilized (as of this writing).

Bitcoin fell to a low of $34,740 on February 24 as investors fled riskier assets.

The Russian incursion into Ukraine raised significant concerns at the time, but given the Ukrainian forces’ resistance and the perception that sanctions against Russia were less severe than expected, the situation has since improved for BTC (and other assets).

Depending on the situation, the market could fall again if violence erupts or sanctions have a significant impact on Western nations.

Despite the ongoing conflict, markets are currently performing well in light of the current situation and many other aspects of the conflict that are beneficial to crypto. In particular, cryptocurrency has once again proven its worth as a tool for crowdfunding and charitable giving.

In the latest tally from the analytical firm Elliptic, the Ukrainian government and pro-government NGOs have received approximately $24.6 million in various cryptocurrencies.

This sum is the result of 26,000 separate gifts, including one for $3 billion in bitcoin and another for $1.86 million. Ukraine has also been offered contributions from Uniswap (crypto exchange), Aid for Ukraine (DAO) and  Dr. Gavin Wood (the founder of Polkadot).

Since the start of the conflict, Ukrainian officials posted Bitcoin and Ethereum addresses on their Twitter account, giving donors a direct and clear address to which to send donations.

Over $10.2m (9.2 million euros) worth of cryptocurrency was donated to the wallets within four days of the start of the invasion.

The Ukraine government has gone on to receive more than $100m worth of crypto ever since, with 60% of the donations coming from the “Crypto Fund for Ukraine”, which is run by Michael Chobanian – the founder of the Ukrainian crypto exchange Kuna.

“We are still collecting crypto. It is being spent on aid like daily rations and bullet-proof vests and helmets,” the 37-year-old Ukrainian told AFP.

Such contributions benefit not only the Ukrainian government and military but also show how cryptocurrencies can help break down barriers to international transactions and operations. To put it another way, cryptocurrency acts as a dependable link between various peoples and countries.

Indeed, numerous recent cryptocurrency-related headlines from Ukraine have conveyed this message. Several people have reported that bitcoin and other cryptocurrencies allowed them to evacuate Ukraine before the fighting reached their neighborhoods.

Despite the stoppage of ATM withdrawals, some users were able to move their bitcoins and other cryptocurrencies to hot wallets and use them to pay for travel to other parts of Europe.

Other accounts detail how at least one person in Ukraine used BTC to buy a car (to facilitate their exit from the country) and how multiple members of Crypto Twitter staged bank runs and blocked ATMs to demonstrate how cryptocurrencies allow people to bypass financial restrictions and, by extension, war-torn countries that impose them.

And, if a growing number of Ukrainians turn to Bitcoin and other cryptocurrencies during the crisis, the latter might help spread the concept of crypto as a liberating tool.

The Impact of the Ukraine-Russia Conflict on Cryptocurrency

Given that the Russian ruble has fallen by up to 25% since the country was sanctioned, we can expect significant growth in Bitcoin and cryptocurrency ownership in Russia.

Bitcoin has now eclipsed the ruble in terms of market valuation, and with over 11% of the Russian adult population owning cryptocurrencies, this number is certain to rise as people attempt to protect their assets.

Bitcoin has also risen by over 35% since the start of the Ukraine-Russia conflict. Even if crypto appears to be in a terrific crisis, things for Bitcoin and cryptocurrencies may not be as bright as they appear.

There is growing suspicion that Russia may use cryptocurrencies to evade international sanctions, but some experts have highlighted concerns about how easy it would be to convert billions of dollars to bitcoin and move such large amounts around.

Sanctions, on the other hand, have targeted so-called oligarchs as individuals, and the world community may discover that they use crypto to avoid negative financial consequences.

This is clearly the US government’s thinking, as it has already begun discussions with key American cryptocurrency exchanges on how to prevent Russian citizens from circumventing sanctions by using Bitcoin and other virtual currencies.

The concern here is that Russian individuals and entities will continue to successfully exploit cryptocurrency to shift their wealth around the world. If this is the case, the industry may encounter stiff opposition from regulators and government agencies, who may seek to restrict cryptocurrency usage severely.

Experts believe this is a serious risk, with Cowen analyst Jaret Seiberg telling MarketWatch that the US is concerned that Russia may use cryptocurrencies to circumvent sanctions.

“If Russia succeeds in this quest, we expect political support for cryptocurrency to wane in the United States, and regulatory risk to rise,” he said.

Of course, the situation in Ukraine and Russia is now fluid and uncertain, so it’s difficult to say whether targeted Russians would embrace cryptocurrencies in a large way.

It remains a possibility, though, considering that the turmoil has increased bitcoin volumes in both Ukraine and Russia.

As a result, traders should be aware that, despite a recent upswing in market fortunes, the market may reverse course in the future, depending on the conclusion.