Investors lost over $100M after Invictus Capital moved funds into UST, Celsius against their wishes

Invictus Capital ousted its founder and allegedly moved investors' funds into UST and Celsius and refused to exit positions. 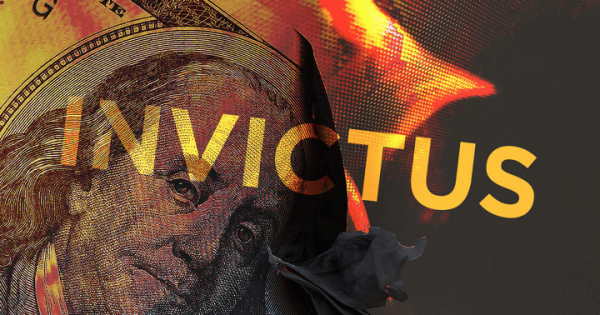 Invictus Capital, a crypto investment firm based in South Africa, moved crypto from funds designated for investments with “no anticipated downside risk” into Terra USD and held the tokens through the UST de-peg event citing “pretty amazing interest” as justification for holding through the crash.

Invictus Capital had roughly $135 million in assets under management at the time of the collapse of Terra Luna. A percentage of these funds were held in UST, which could be viewed as acting against the terms of the original whitepaper that referenced “USD equivalents with little anticipated drawdown risk.”

Around the same time, 50% of its assets nominated for cold storage were revealed to be held in Celsius. The funds are now locked, and Invictus Capital is teetering on the brink of bankruptcy and has filed for voluntary liquidation.

The firm suspended withdrawals and shut down all of its social media channels amid internal conflict and an outcry from investors demanding information on their holdings.

Communication from Invictus has been limited since early June, and a restructuring CEO, Haydn Hammond, has been appointed following the departure of founder and ex-CEO Daniel Schwartzkopff.

Invictus Capital is a public-facing entity representing several segregated portfolio companies in the Cayman Islands. Its offering is designed to allow investors a simple way to invest in cryptocurrencies while minimizing the downside risks.

One product, Invictus Margin Lending (IML), actually offers “the ability to take advantage of the cryptocurrency market’s volatility to earn interest with no anticipated downside risk.“

Removal of the CEO

Things started to fall apart for Invictus in April 2022 after in-fighting between Schwartzkopff and members of one of its service providers Kalahari. Kalahari and another company, Sahara, provided all employee services for the Invictus Capital Group of companies, according to filings by Kalahari and Sahara Director Steven Williams. 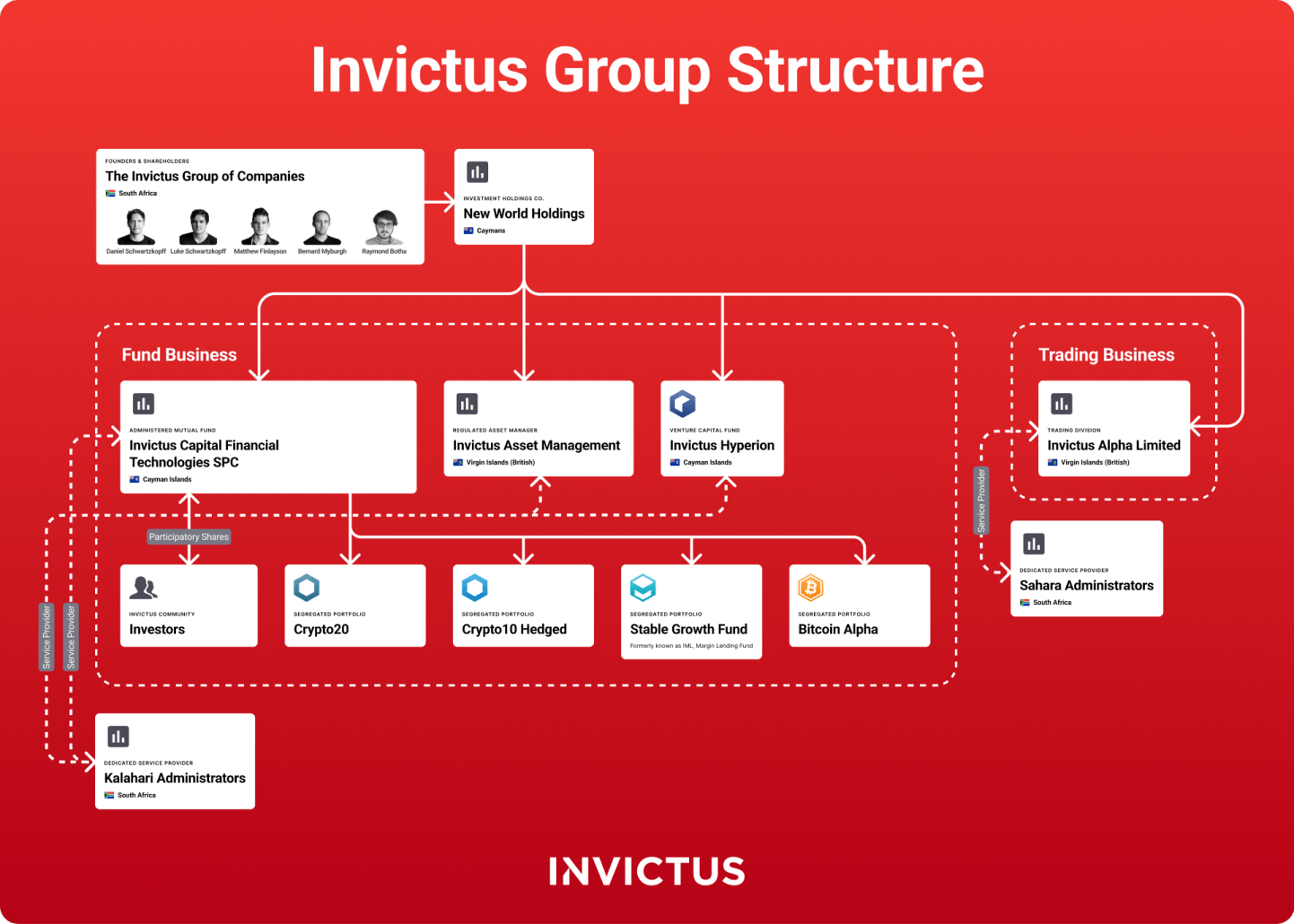 CryptoSlate reached out to several Invictus employees but all requests for comment were refused. The only available comment comes from a letter to Invictus staff following the removal of Schwartzkopff stating, ” it is sufficiently serious that it is likely to cause the business to be discontinued or materially restructured.”

However, we were able to speak to Schwartzkopff and several investors, including Lev Mazur.

Mazur, the founder of Quantfury, a blockchain trading platform, became involved with Invictus through its investment product, the Hyperion Investment Fund. Investors gained exposure to a basket of potential blockchain unicorns by buying the IHF token.

Quantfury was launched through an IHF investment, yet Mazur affirms that the company has no direct relationship with Invictus Capital as a business. The experience did, however, give him insight into the workings of the company through interactions with its employees.

Mazur and Schwartzkopff became close following Quantfury’s funding, with Mazur stating that the launch was “all him” in reference to Schwartzkopff’s assistance in securing the investment. Mazur speaks highly of Schwartzkopff, saying, “he’s kind of a genius type… similar to SBF.”

In mid-April, Schwartzkopff was ousted from Invictus and made to tender his resignation during a board meeting.

The below image is a leaked copy of the resignation letter signed by Schwartzkopff and the board members written on a notepad. 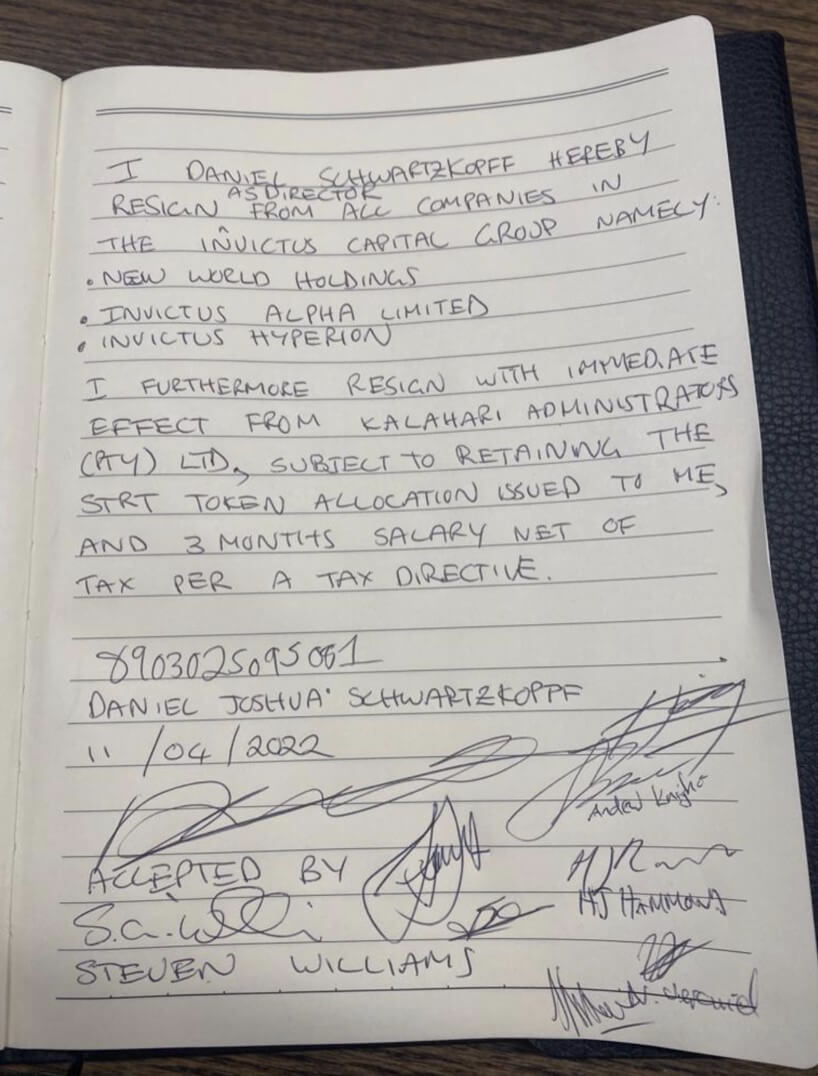 It is highly unusual for a company with over a hundred million dollars in assets under management to use a notepad for such an important document. People familiar with the matter told CryptoSlate that Schwartzkopff was “literally pushed and mentally abused, extruded to sign it.”

Schwartzkopff founded Invictus Capital and is well-known to be the brains behind the operation. While many members of the community have now turned against him, few assert that he was not highly talented.

Schwartzkopff created several ETF-like products that utilized smart contracts to hedge crypto investments and spread them across crypto assets. His creations made the company very profitable, but the consensus was that he was not fit to be the CEO.

Reports state that Schwartzkopff rarely came into the office and was more interested in the code than running the company. He was constantly coming up with new ideas for investment strategies, and during one of these strategies, he lost $4 million of Invictus Capital funds.

Schwartzkopff told CryptoSlate that the money he lost was from company profits. Many community members, however, allege that Schwartzkopff used client funds lent from the Invictus Alpha Fund. No evidence has been found to confirm these claims.

Schwartzkopff believes the allegations were created by Invictus Capital employees “posting under troll pseudonyms on the Discord.”

He further claimed they threatened him, chased him to his parent’s home, and

“[Did] some pretty unscrupulous things like logging into my private Whatsapp and Telegram on my company laptop that I handed in. They also refused to give me my emails or Slack messages so that I could defend myself against any allegations.”

After Schwartzkopff was ousted from the company, Invictus Capital sent a letter to its community refusing to give specific details about the circumstances surrounding Schwartzkopff’s removal. It did, however, relay that the “boards accordingly authorized management to request Daniel’s resignation, which he tendered.”

With Schwartzkopff out of the picture, Invictus Capital increased the exposure to UST of the Invictus Margin Lending fund, as displayed in an email sent to some investors. The update was leaked to CryptoSlate by an ex-employee, and it explained that

The percentages indicate that Invictus Capital had around $22.5 million tied up directly in UST.

Before this information became public, investors reached out to Invictus via the official Discord server, telling them to exit the position. However, Invictus representatives played down fears that the de-peg would have long-term repercussions.

During the week of Terra’s collapse, a verified Invictus Fund Analyst told investors in Discord that “we don’t see much of a risk of the peg breaking down,” citing the past performance of UST as his rationale. He further stated that he had “full confidence that the peg will be maintained.”

The Invictus Analyst later added that “we’re earning pretty amazing interest… 30+%,” and he was “still not worried.” He additionally declared that he didn’t think it was a possibility that LUNA could go to zero “and stay there.”

In several conversations regarding the event, Schwartzkopff claimed that he would have gotten out of the position around $0.97, citing his late-night move to sell XRP when the “lawsuit hit.” Schwartzkopff was no longer involved with the company during this period. However, he told us that he tried to call Invictus when the peg finally broke, but nobody picked up.

Due to Invictus’ conviction that UST would re-peg, investors asked for proof of a risk management strategy. None was provided, but one investor who reached out via Invictus’ website received a response on May 11 saying, “we should see a slow recovery back to the dollar parity.”

At this point, UST had fallen below $0.65 and recovered to around $0.86. Invictus remained bullish, stating, “the ISF fund will be maintaining its UST position.” The email to investors that “regrettably” informed them that over $22.5 million of UST was held across several funds was sent the next day, May 12.

Two of the core products offered by Invictus were cryptos index funds called C20 and C10. C20 was marketed as a way to invest in “regulated and tokenized funds” and allowed investors exposure to “the top 20 crypto assets” through one single token. Meanwhile, C10 was a hedged “smart index fund” designed to limit the loss of capital using a “dynamic cash hedging mechanism.”

The crypto within the C20 Fund was supposed to be held in cold storage, according to the portfolio’s whitepaper. However, Invictus later revealed that 50% of the C20 fund and the majority of C10 were, instead, held on Celsius.

Another letter to investors confirmed the exposure to Celsius but interestingly contradicted an early statement regarding the C10 exposure to UST:

The total value of reserves held in Celsius is estimated to be in the region of $49 million before the collapse of Terra and $23 million after. The funds were approximately 55% of the total assets under management. At the time of Celsius’ bankruptcy filing, in which Invictus Capital was listed as one of the largest creditors, the value of assets amounted to $17.7 million.

The impact on investors

Of the $135 million managed by Invictus, approximately $80 million was invested in either Terra or Celsius. These investments were either lost to the collapse of Terra or are still locked inside Celsius. Investors have had no access to withdraw funds for over a month, with all means of communication disabled by Invictus.

Investors have grouped together to create a private Discord community with hundreds of members and thousands of messages. The server, named “Independent Invictus Tokenholders,” has been instrumental in aiding CryptoSlate in sourcing original documentation from Invictus to validate claims.

Several active members spoke to CryptoSlate directly to facilitate this investigation, revealing that many retail investors involved with Invictus have lost their entire net worth in the disaster.

Alvarez & Marsal, the same firm representing Celsius, represents Invictus. It told Celsius that “it must not communicate with customers because they may be seen to be prejudiced in the event of a bankruptcy.” Invictus Capital has been equally silent on the matter following its voluntary liquidation filing.

CryptoSlate reached out to several members of Invictus Capital and Kalahari, including Restructuring CEO Haydn Hammond, but no one was willing to comment. Hammond did, however, contact CryptoSlate in June, asking journalists to stop looking into the story.

CryptoSlate will publish follow-up stories as our investigation into Invictus moves forward and as we uncover more information.

Blocklight is the investigative division of CryptoSlate. If you have lost money through Invictus Capital, hold further information, or have any other tips regarding bad actors within crypto, you can contact us via email.