Chinese crypto exchange Huobi will make its first foray into a physical product with the launch of its sixth token offering on IEO platform, Huobi Prime. 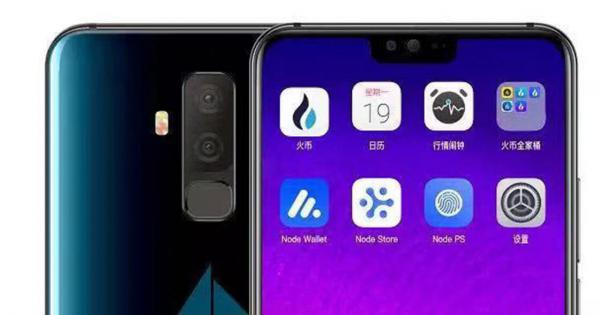 Chinese crypto exchange Huobi will make its first foray into a physical product with the launch of its sixth token offering on IEO platform, Huobi Prime. Huobi traders will have the opportunity to purchase NODE, the token of Whole Network and its blockchain phone, Acute Angle, during two trading rounds on September 11. However, as part of this sale, traders will also have the opportunity to use their Huobi Tokens (HT) to purchase their very own Acute Angle phone.

The phone is based on Android OS and offers a range of blockchain and cryptocurrency features. These include a built-in store for apps and dApps and a reward feature where users can earn NODE tokens for interacting with other members of the cryptocurrency community using their phone. As you’d expect, the phone offers a built-in wallet but also features a separate plug-in cold wallet.

The Acute Angle handset is already available to Chinese markets, and the company plans to launch to more Asian markets during the rest of 2019. Further expansion into other regions is slated for next year. The phone retails for just over $500, which is a lower price point than competitor phones featuring blockchain capabilities, such as Sirin Labs Finney or the HTC Exodus.

The NODE token sale and Acute Angle launch isn’t the first collaboration between the two companies. Huobi provided some of the early-stage capital to the development of the Acute Angle phone through its venture capital branch, called Huobi Capital. The company believes that blockchain phones connected to a decentralized web will be in higher demand as the telecommunications industry enters the 5G era.

Although the existing version of the Acute Angle phone operates on 4G, Whole Network plans to launch a range of blockchain-enabled phones in the future, including models with 5G capability.

Blockchain phones seem to be having a moment. Only a few days ago, news reports emerged that China Telecom is developing a blockchain phone. Sirin Labs has just rolled out its flagship blockchain phone, called Finney, to consumers in Singapore.

HTC is set to release the second version of its Exodus phone before the end of the third quarter. So perhaps Huobi is striking while the iron is hot in launching the Acute Angle phone at this time.

But are blockchain phones a solution in search of a problem? After all, there are plenty of decent wallets available on the internet, such as Jaxx or Edge, that offer integration with existing smartphones. The security-conscious, or those with significant values at stake, tend to opt for cold storage wallets in any case. The NODE user reward model may prove to be an attractive way to earn a few tokens. However, reward-based dApps are unlikely to yield any significant profits.

Build It, But Will They Come?

Perhaps the one game-changer for blockchain phones could be the dApp store. After all, the emergence of smartphones put app marketplaces such as Apple’s App Store and the Google Play Store into the hands of billions of people.

Samsung certainly believes there’s a case for blockchain integration. The tech giant has already incorporated a dApp store and wallet into part of its product range, including the flagship Galaxy S10 smartphone.

Currently, blockchain dApps haven’t gained the level of mainstream adoption that many in the community had hoped they would, in part because they aren’t always accessible for everyday non-crypto users. For this group, having a dApp store integrated with a crypto wallet on a smartphone interface may be a sufficiently low barrier to entry. Maybe the infrastructure is the missing link needed to propel dApps into the mainstream.

If the Acute Angle phone features are sufficiently well-integrated, and Whole Network can sign on a few dApps with viral potential, then it’s possible that blockchain phones may start to enter the mainstream. Who knows? Perhaps in a few years, blockchain phones will take up a similar position to smartphones, as the device we never knew we needed.

Samsung is releasing a version of its newest flagship smartphone that supports 34 cryptocurrencies, including Bitcoin and Ethereum, and a variety of DApps, as first reported by the Wall Street Journal. 2 min read

In Samsung’s latest move into crypto, the electronics juggernaut made the beta version of its blockchain SDK for the Ethereum blockchain available to partner developers. 2 min read

Apple has announced “CryptoKit,” a new framework that will allow developers to perform cryptographic operations securely and efficiently. 2 min read

On October 23 at the Web3 Summit event in Germany, HTC announced the launch of its Exodus 1 smartphone which will include the manufacturer’s proprietary wallet called Zion, according to CNBC. 2 min read