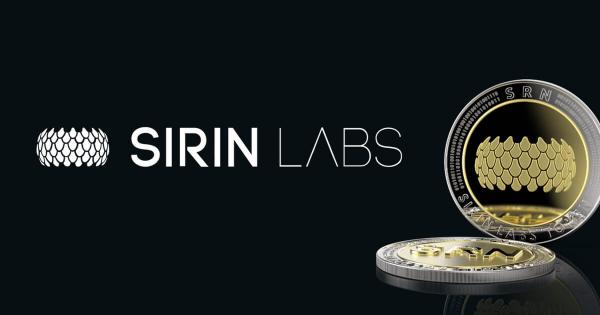 The burgeoning cryptocurrency market is distinct with exchanges, payments, and wallet businesses, with only few other implementations. However, the smartphone market is seemingly catching on, as Israel-based Sirin Labs announced a cryptocurrency-powered phone on July 11, 2018.

Termed “Finney,” in homage to Bitcoin evangelist Hal Finney, the latest Sirin Labs phone is priced at $1,000 and boasts of powerful computing software and unmatched privacy.

The company previously launched the Solarin privacy phone with a hefty tag of $14,000. Needless to say, sales failed company expectations and did not impress smartphone critics.

However, Sirin Labs has since taken a cue from the Solarin debacle, and worked towards building a “mass-market provider” while offering cryptocurrency enthusiasts a secure wallet device.

To bring prices down to $1,000, the Finney is manufactured by Foxconn, the Taiwan-based hardware company behind Apple, Nokia, BlackBerry, and Xiaomi.

Touted as a phone for the “blockchain era,” the Finney features hardware reminiscent of Solarin, but that is where the similarity ends.

Regarding software specifications, Finney runs an enhanced version of Android – primarily with better security features considering the sensitivity of a cryptocurrency-carrying device – and runs on 6 GB RAM with a Snapdragon 845 processor. Users can also access a unique blockchain app store to update existing applications and install new ones.

Apart from the cold wallet and app store, Finney features a Token Conversion Service (TCS), a first in the smartphone class. The TCS is primarily a brokerage for cryptocurrencies and can instantly convert SRN, Sirin’s native tokens, to any other supported digital asset.

“Rather than having to stand, in the rain, buying tokens to hire a car, TCS will handle all of it for you, automatically. He was less clear, however, on how exactly the system would handle long transaction times and processing fees, an issue that plagues Bitcoin users on a regular basis.”

Interestingly, the Finney can only be purchased with $1,000 worth of SRN tokens, with a 10% discount on pre-orders.

While members of the broader cryptocurrency community may still voice concerns of theft, Sirin CMO Nimrod May argues the phone is not meant to replace cold storage wallets completely. Instead, he believes users must transfer their required expenses for the day on the phone prior to going out than moving around with all their funds.

While no measure of user demand is available at the time of writing, Sirin Lab raised close to $158 million in December 2017 via an Initial Coin Offering (ICO).

The company reportedly engaged the services of Argentinian footballer Lionel Messi to promote their smartphone offering, which could contribute towards better sales figures than Solarin.

Finney launches in November 2018, with an initial release in New York, London, and Tokyo.