The disruption of the cumbersome supply chain industry by platforms such as Waltonchain, VeChain, and Ambrosus is evidence of the potential blockchain may have on centralized systems. However, the next industry to be revolutionized after the decentralization of the supply chain ecosystem may an unexpected one.

The disruption of the cumbersome supply chain industry by platforms such as Waltonchain, VeChain, and Ambrosus is evidence of the potential blockchain may have on centralized systems. However, the next industry to be revolutionized after the decentralization of the supply chain ecosystem may an unexpected one.

Accountability and traceability are aspects of blockchain technology that are absent from the labyrinthine digital marketing industry, which is presently valued at over $250 billion dollars annually.

The entire digital advertising landscape is unclear, prone to interference from middlemen, notoriously centralized, and highly inefficient – making it the ideal ecosystem for the application of transparent, immutable distributed ledger technology.

Waltonchain’s WTC token and VeChain’s VEN soared over 1000% since the Q3 launch in 2017. Which blockchain platform focusing on advertising industry will follow suit?

Digital advertising surpasses every form of advertising in the world, including print, television, and billboards. Despite its massive size, the industry is extremely centralized with few large middlemen maintaining controlling a significant portion of the market.

Google and Facebook currently dominate the digital advertising ecosystem, controlling an estimated 73% of all online ads. Data collected by the Interactive Advertising Bureau in 2017 shows that 75% of all online ad revenues are dominated by the top 10 companies. The top 25 companies account for an additional 8%, and only 18% of the revenue of the entire digital advertising market is held by the rest of the industry.

While it’s true centralized middlemen are a prominent issue within the digital marketing, the primary issue isn’t with the limited number of advertising channels available to advertisers — it’s the manner in which ad performance is tracked. The digital marketing industry revolves around impressions, which is the number of instances any given advertisement is served to a consumer.

The process of tracking impressions can and is easily disrupted by ad-bot scams, fake traffic generation techniques, and a range of other exploitation methods that obfuscate the actual value of a digital marketing campaign. This makes it extremely difficult for organizations purchasing digital marketing to determine whether it is cost-effective.

A marketer may spend over $2 million on digital marketing to achieve 1 million impressions, but it’s commonplace for half of them to be generated by bots.

This opaque, difficult to track ecosystem results in significant wastage. Published in 2017, Juniper Research’s “Future of Digital Marketing: AI, Ad Fraud, and Ad Blocking” report reveals that more than $51 million is wasted daily on fraudulent impressions. Another study by the Association of National Advertisers in 2017 found that over 9% of desktop display and 22% of video spending was inauthentic, demonstrating the extent to which digital advertising industry is compromised.

The three biggest problems facing the digital advertising industry are:

How Blockchain Technology is Revolutionizing the Digital Advertising Industry

Blockchain technology eliminates the reliance on third-party middlemen crippling the current digital marketing industry. Using blockchain-based platforms, advertisers can connect directly with publishers in a completely transparent manner. The ability to transact via smart contracts ensures that publishers will be able to determine precisely what they are paying for and to only pay if smart contract terms are met.

Similarly, the transparent nature of blockchain technology eliminates the possibility of ad fraud. Impressions can be recorded on an immutable distributed ledger, making it far easier for publishers to access consumer metadata to improve campaign efficiency.

The Gugya 2017 State of Consumer Privacy and Trust report shows that consumers have an increasing understanding of the impact of data security, with 68% of consumers refusing to trust brands with their personal information.

Blockchain technology enables user metadata to be completely anonymized, or in some cases, even provide consumers with incentivization for sharing their personal data.

Bringing the digital advertising market onto the blockchain allows publishers to access meaningful, actionable information by engaging directly with both advertisers and consumers without the need for middlemen.

Who is Disrupting the Digital Advertising Industry With Blockchain Tech, and How?

One of the most successful blockchain-based digital advertising projects is the Basic Attention Token, created by JavaScript creator and Mozilla co-founder Brendan Eich.

Operating from two successful seed rounds raising $7 million across 2015 and 2016, the BAT project captured over $35 million in an ICO that sold out in just 30 seconds — to only 130 people, with five individuals capturing over 50% of the tokens sold in the crowdsale. 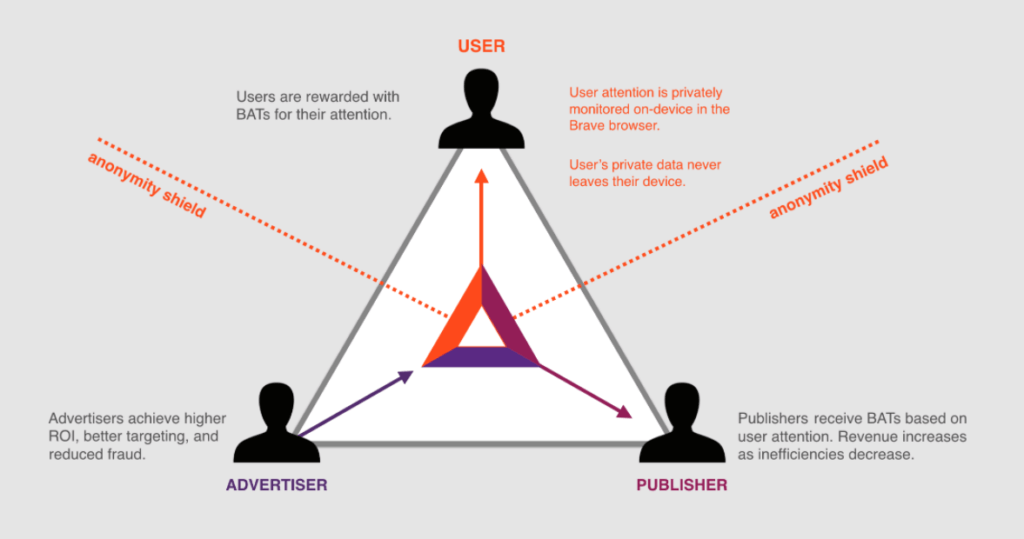 The Basic Attention Token, while limited to use only within the Brave browser, takes an interesting position on digital advertising. The Brave browser privately monitors user attention, rewarding consumers with Basic Attention Tokens. Publishers receive BATs for user attention, with revenue increasing or decreasing in tandem with efficiency. Advertisers pay both publishers and consumers with BAT, delivering a transparent, traceable, and cost-effective ecosystem for all parties — as long as consumers are using Brave.

MetaX’s adChain solution is another blockchain-based solution intending to disrupt the digital marketing ecosystem without requiring the use of a specific browser. Instead, the adChain project wants to allow buyers to purchase individual impressions, which are encoded into a block and shared with chain participants.

Publishers are able to verify impressions, adding them to the ledger to create an audit trail eliminating the risk of ad fraud. Buyers can see how many times an impression was seen, who saw it, and how budget capital was spent by publishers.

MetaX recently released its 2018 roadmap for the adChain project, with the adChain advertiser registry set for a late Q3 2018 launch. Alanna Gombert, the Global CRO of MetaX, highlighted the importance of combating ad with blockchain technology in an interview with CryptoSlate:

“We are excited to bring transparency, decentralization, and token consensus models to digital advertising. Digital advertising is full of fraud (to the tune of 9 billion dollars) and arbitrageurs. The adserving technology is dated and monolithic. It does not bring in the voice of the people. adChain aims to fix all of that.”

The MetaX solution may aim to eliminate digital advertising fraud altogether, but another project is focused on eliminating middlemen. The AdEx platform is designed to destroy the digital advertising oligarchy by creating a smart contract executed marketplace in which advertisers are able to bid for advertising slots.

AdEx launched the beta of the AdEx dapp in early 2018 and more recently published a roadmap that will see the AdEx protocol — including smart contracts, generalized advertising infrastructure, and a scaling solution — by September 2018.

AdEx CEO Ivo Georgiev outlined the upcoming goals of the AdEx platform in an interview with CryptoSlate, asserting that the project is “generalizing/standardizing trading advertising in a decentralized way with the aid of blockchain.”

“What is coming soon is this protocol definition, and also we’re looking into possibilities to also implement bidding for advertising over NFTs.”

There are many other blockchain-based digital advertising platforms, such as Oyster Protocol, AdHive, and Bigbom – all of which incorporate different approaches to the issues presented by the current market paradigm. All operate with similar goals but are presented with the same obstacles — slow adoption rates and the difficulty in delivering a strong value proposition, especially in the enterprise sector.

However, the creeping adoption of blockchain technology in the supply chain industry is a strong example of how the self-evident value of distributed ledger efficiency and transparency causes organic implementation — a phenomenon soon likely to be mirrored in the advertising industry on a widespread basis.