Reports from Lookonchain and Peckshield identified several whale transactions that could have impacted FTT's value. 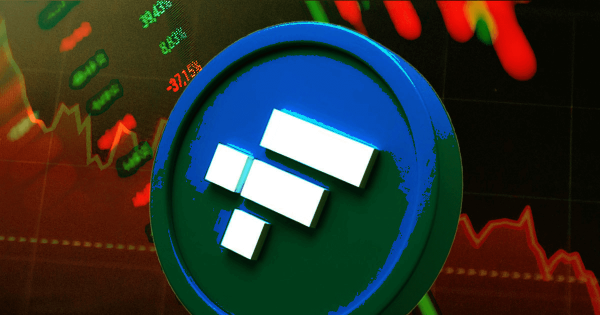 FTX’s FTT token lost roughly 30% of its value in the last 24 hours after 1.9 million FTT tokens — worth roughly $44 million at the time — were moved from the Genesis over-the-counter (OTC) Desk to FTX on Nov. 8, according to Wu Blockchain.

Speculation pointed to Binance but the exchange’s CEO Changpeng ‘CZ’ Zhao reportedly denied that the exchange has sold its FTT.

FTT had mostly traded for around $22 on Nov. 7; however, the asset experienced extreme volatility in the early trading hours of Nov. 8, pushing its value to as low as $15.56.

Reports from Lookonchain and Peckshield identified several whale transactions that could have impacted FTT’s value.

Meanwhile, Peckshield reported that over 13 million FTT tokens were transferred from FTX to new wallets. One of the transactions involved the transfer of 10M FTT ($166.5M) away from its parent company exchange to the address 0xc…cb6-the address is now the fourth largest holder of FTT.

#PeckShieldAlert ~10M $FTT (~$166.5M) has been transferred from FTX exchange to the address 0xc…cb6
The address has become the 4th largest $FTT holders pic.twitter.com/lsEJibtFHI

BNB, Solana, and BIT caught in the crossfire

Binance’s native token, BNB, also appeared to have experienced some mild sell-off, falling by around 8% to $315 during the early trading hours.

While the token has slightly recovered to $326 as of press time, Lookonchain identified three dormant addresses that sold $89.5 million of their BNB holdings.

Not trying to FUD @SBF_FTX and Alameda but when $SOL takes a 10% dump + other solana coins also tanking, while $FTT stays the same at $22, it’s clear who is market selling $SOL and other coins to defend $FTT 😕 SOL is going much lower at this rate of selling pic.twitter.com/HS2fghFug9

Hal Press, the founder of a hedge fund investment in cryptocurrencies North Rock Digital, raised questions about whether Alameda dumped Solana to support FTT at $22. Press continued that a below $22 price “could trigger some loans they (Alameda) can’t repay.”

Another flag is Alameda seemingly dumping SOL to support FTT at 22. Why is 22 so important? https://t.co/1JJQAaCRrM

Meanwhile, another crypto token that was caught in the whirlwind was ByBit’s BIT token. The BIT token plunged roughly 20% within an hour to $0.307, forcing the BitDAO community to question whether Alameda dumped and breached their three years mutual no-sale commitment.

busy at the moment but that wasn't us, will get you proof of funds when things calm down

Alameda CEO Caroline Ellison, however, quelled the rumors stating that the trading firm had not sold its BIT holdings.

Nansen CEO Alex Svanevik tweeted that the transaction that took the FTX wallet below 100 million BIT was made by the venture capital arm of ByBit, Mirana Ventures.

A bit odd that the transaction that took them below 100M BIT actually was made by Mirana Ventures – Bybit's own VC arm. pic.twitter.com/KanHJDfwnP

END_OF_DOCUMENT_TOKEN_TO_BE_REPLACED

Nansen is a blockchain analytics platform that enriches on-chain data with millions of wallet labels.