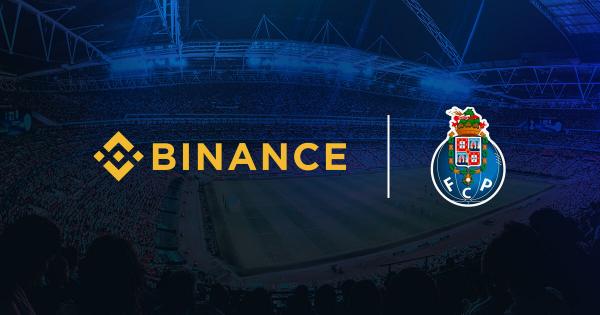 In November, Binance officially signed a partnership with football giants FC Porto as an official fan token partner. Now they are ready to highlight this partnership in all of its glory, bringing interactive, social tokens to their fans. After a match against CS Marítimo FC Porto chose a winning message from a fan and distributed fan tokens.

“The symbol you wear on your chest is your greatest strength. Win for us!”

The global exchange will become the official fan token partner for the Dragões, one of the most famous football clubs in Europe. The sponsorship also sees the Binance branding appearing on the back of player shirts in the first season and on the sleeve as a sponsor for the next season.

A football sponsorship with extra engagement

Now that the partnership is active, the PORTO fan token is available to fans via the Binance launchpad and provides an extra level of engagement for fans with offerings of unique token rewards, gamification and interaction before and after the games.

FC Porto was founded in 1893 and since then, the club hasn’t stopped winning. It is the Portuguese club with the most international titles (7) and the only club outside the four main European championships to win the Champions League this century. Domestically, it has won 29 National Championships, 17 Portuguese Cups and 22 Supercups.

It is also the most decorated Portuguese club on the international competition stage, winning the European Cup/UEFA Champions League in 1987 and 2004, the UEFA Super Cup in 1987, and both the UEFA Cup/Europa League and the Intercontinental Cup twice, respectively. The club is managed by Sérgio Conceição and includes prolific international players such as Pepe, Luis Díaz, Otávio, Mehdi Taremi and Matheus Uribe.

The club has a huge following and fan base with over 1.4 million followers on Twitter alone.

The official FC Porto Fan Token (PORTO) is a utility token providing fans with revolutionary new ways to engage with their favorite club. PORTO is available for all Binance users via the Launchpad. To get the ball rolling, Binance offered fans of FC Porto the chance to win 6,000 PORTO fan tokens. Through its PowerStation feature, fans can charge supported NFTs and earn rewards on an hourly basis according to their Fan Power.

A series of NFT titles FC Porto Dragan Goalkeepers are on offer through the platform. Taking the form of a traditional trading card game, fans have the chance to collect PORTO NFT mystery boxes. The unique collections give fans the chance to collect NFTs of the greatest goalkeepers in FC Porto history. If a fan completes the collection it can continue to the next level.

This interactive collaboration between sports brands and exchanges is only starting to take off. As more fans learn about the NFT scene and engage with the gamification elements of these partnerships there will be new innovations that connect the players to the fans even further.