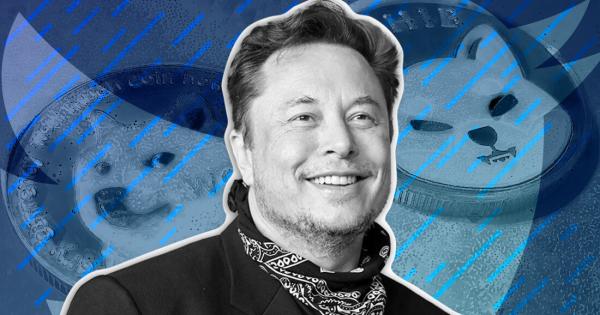 Tesla and SpaceX CEO Elon Musk has made an unsolicited offer to fully acquire social media giant Twitter for a total cash consideration of $43 billion, according to SEC filings.

Musk has offered $54.20 per share — representing a 54% premium over the Jan. 28 closing price — to acquire the social media giant.

Musk made the announcement by tweeting the regulatory filing with the caption “I made an offer.”

I made an offer https://t.co/VvreuPMeLu

The news caused Twitter’s share price to soar 18% in pre-market trading before falling to around $48 per share.

Twitter shares weren’t the only asset that reacted to the news. Musk’s love for meme coins, especially Dogecoin (DOGE), combined with the news and rumors that Doge might become Twitter’s tipping currency, seems to have caused a positive reaction in both DOGE and the canine cousin Shiba Inu (SHIB).

The billionaire crypto fan first disclosed a stake of about 9% in the company on April 4, after which he was offered a seat on the board as the largest individual shareholder.

The bid is the latest chapter in Musk’s dramatic relationship with Twitter, as he has frequently criticized the company’s approach to “limiting” freedom of speech. In addition, musk has been vocal about changes he’d like to consider imposing on the social media platform.

According to a Bloomberg News report, the offer price of $54.20 is too low for Twitter’s board as the company’s share price was as high as $70 in 2021. It is unclear whether the board will accept the aggressive and unsolicited offer.

However, Musk may divest his 9% stake in Twitter if the offer is rejected. In a letter to the social media giant’s board, the Musk said he believes that:

“[Twitter] will neither thrive nor serve [its free speech] societal imperative in its current form. Twitter needs to be transformed as a private company.”

“If the deal doesn’t work, given that I don’t have confidence in management nor do I believe I can drive the necessary change in the public market, I would need to reconsider my position as a shareholder.”

The big question mark for the crypto industry is whether Musk will integrate cryptocurrencies more tightly into the Twitter app. Tipping with DOGE might be one feature that Musk could enforce, considering previous rumors and speculation. However, at this point, it is anybody’s guess.

DOGE up 18% as Elon Musk moves to take over Twitter