CryptoSlate recently caught up with Will Harborne, the co-founder and CEO of DeversiFi, a decentralized crypto exchange that was formerly known as Ethfinex. 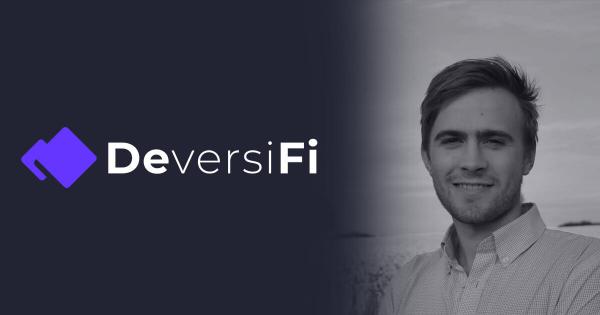 CryptoSlate recently caught up with Will Harborne, the co-founder and CEO of DeversiFi, a decentralized crypto exchange that was formerly known as Ethfinex.

Even though decentralized exchanges are still in their infancy, in the five years since the first iterations launched (think EtherDelta), they have evolved to a point where they are now starting to compete with centralized exchanges in terms of liquidity and speed, while offering far superior solutions when it comes to usability, security, and transparency.

Harborne, a former project lead at digital asset exchange Bitfinex and blockchain consultant at IBM, discussed the major advantages of using a non-custodial exchange such as DeversiFi to trade cryptocurrencies, instead of using more traditional centralized platforms. In addition, Harborne shared several customer stories of how its traders are using and liking the decentralized exchange experience.

What are the advantages of using DeversiFi to trade crypto assets, instead of other major exchanges?

Will Harborne (WH): We’re proud to bring a number of competitive advantages to DeversiFi, making it an attractive exchange for traders of all levels.

Firstly, our unique platform allows traders to access deep liquidity pools from both centralized and decentralized exchanges from the security of their privately owned wallets, preserving the self-custody and control that sits at the heart of DeFi whilst also going some way in solving the barriers to adoption for traditional DEXs.

In the past, a trader had to make a choice between risking security and control for speed and liquidity or vice versa. They no longer need to make that choice with DeversiFi. In line with this, DeversiFi is incorporating features that reflect those of existing exchanges, including decentralized margin and lending, order options as well as Over-the-Counter functionality for larger trades.

Secondly, we have worked hard to build a decentralized exchange that doesn’t just compete with existing large exchanges in terms of speed and liquidity, but also with innovative features that bring decentralized finance (DeFi) and blockchain’s main innovations into practical use.

DeversiFi’s native utility token is Nectar, which entitles holders to up to 20 percent DeversiFi fee discounts while, perhaps most excitingly, giving holders and the wider community of developers and value creators the space to part-control the future of DeversiFi through the NecDAO; which as of 2019 will be the largest dexDAO ever created.

This provides a distinct advantage to DeversiFi as opposed to the majority of existing exchanges, as it tangibly empowers traders to develop and guide aspects of their exchange the way they see fit, instead of depending on a small group of over-stretched founders to tell them what they want.

What are the main differences between building on Ethereum in 2015 and presently?

WH: The tools which developers rely on now barely existed in 2015/16. Building applications on Ethereum back then involved running a local node with a test network. Tools that make things easy nowadays like Remix, Truffle, Infura, and Etherscan were non-existent or very new back then. Wallets were also difficult to use. I’d be lying if I said things are solved now, but compared to back then, we’ve come a long way.

We try to support many new wallets and projects that are building infrastructure for developers and applications as it’s a pretty scary thing when your entire business is reliant on this infrastructure, including just the Ethereum blockchain itself.

What has the feedback from customers been so far? Do you have any specific examples or stories?

One story is from Albert, a developer based in Singapore who uses DeversiFi to adjust his long positions. He was impressed with the UI, the onboarding process, the number of wallets that are supported and the commitment to end-user security. On why he trades on DeversiFi, Albert said:

“I got started on DeversiFi because I liked the idea of a decentralised exchange with high liquidity, that doesn’t require multiple transactions (each with fees ) for each trade. I’ve continued using DeversiFi because it fits my trading habits: the high liquidity allows me to clear the trades I do quickly, and at the market price, which is necessary when trading digital assets, which have fast and frequent price fluctuations.”

Another example is Alex, a part-time trader. On the ease of using DeversiFi, Alex said:

“I have various ETH accounts for different decentralised applications and projects that I’m using, so if I want to adjust token balances on any of those wallets, it’s actually easier and faster to just open DeversiFi and lock, trade, unlock the balance than to deposit, trade and wait for a withdrawal from a centralised exchange.”

What role does the Nectar token play in the DeversiFi ecosystem?

WH: The first phase of the Nectar token was originally launched back in 2017 as the exchange token of Ethfinex. Its purpose was to reward liquidity providers whilst offering a voting mechanism that allowed traders to decide which tokens they wish to see listed through the Kleros-enhanced Ethfinex Token Vote, which saw 15 successful rounds of voting.

Phase two of the Nectar token came about alongside our evolution into full decentralization with the closing down of Ethfinex and the emergence of DeversiFi. NEC2.0 (the final phase of Nectar with any future alterations being decided through the NecDAO) now has three main innovations:

One of the most significant features is without a doubt NecDAO. Over phase one of the Nectar roadmap, we collected 50 percent of all Ethfinex trading fees, pledging them to Nectar holders in the nectar smart-contract. All of the remaining fees in this contract have, as a result of the closing of Ethfinex, been migrated over to the NecDAO and placed in the control of NEC holders. As of today, there are circa 17,500 ETH being sent to the NecDAO which will place the future of Nectar directly in the hands of holders as well as part-control of DeversiFi. This will be the world’s largest DAO as of 2019.

What changes or modifications have you’ve made to 0x protocol upon which DeversiFi was built?

WH: The wrapper contracts powering DeversiFi exchange are built on the original 0x protocol and offer many benefits to the trader.

The simplicity of DeversiFi API gives anybody the power to build their own custom applications on top of it. This means that any developer can either integrate a token swap functionality into their app, or they can build and run a full-blown exchange without having to deal with complex backend mechanisms.

The Nectar token (NEC) is a governance and loyalty token for decentralised exchanges. Learn more

Will Harborne has an Engineering degree from Cambridge University and enjoys working on visionary technology projects which can revolutionize business models as well as impact wider society. Learn More

DeversiFi is the only high-speed exchange where traders can execute orders of any size directly from the security of their wallet.. Learn More