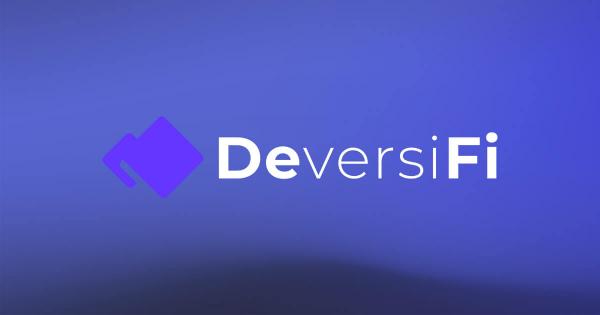 Ethfinex, the decentralized exchange formerly run by Bitfinex, is separate into a new separate entity called DeversiFi. The service will allow users to execute orders directly from their private wallets.

Ethfinex Trustless, a community-driven exchange developed by Bitfinex, will be evolving into DeversiFi, the company announced in a press release shared with CryptoSlate. The new exchange will exist independently from Bitfinex and will offer multiple new features the company has been working on for the past two years.

DeversiFi will deliver deep order books, narrow spreads and fast execution speeds, the company said, while providing the same performance large, centralized exchanges do. Bitfinex also claimed that DeversiFi is the first and only high-speed decentralized exchange that allows traders to execute orders of any size directly from their private wallets.

The exchange will introduce leveraged trading while keeping margin trading as simple as possible. Lending features will also be provided on the platform, allowing traders to lend directly within the Deversifi interface.

Will Harborne, the CEO of DeversiFi, said the new decentralized exchange was a “necessary next step forward” towards the company’s goal of providing a premium service to its clients. Ethfinex Trustless had successfully scaled to the point where users could expect the same performance as that of a centralized exchange.

Paolo Ardoino, CTO of Bitfinex, echoed the statement saying the achievements made by the Ethfinex team have been “incredible.” He also added that DeversiFi was on the right path to facilitate the transition to a decentralized financial world.

According to the company’s press release, all previous users of Ethfinex Centralized will automatically be moved to Bitfinex after it officially closes in September 2019. In the meantime, DeversiFi will be launching new products and features. We are yet to see how Bitfinex’s promises hold up in the next few weeks when more users get on the DeversiFi platform.

Update Aug. 15 @ 2:01 pm Pacific time: This article was updated to clarify that DiversiFi is a separate entity from Bitfinex.

iFinex, the company that owns and operates Tether and Bitfinex, said that the claims made by the New York Attorney General’s office that the companies served New York residents throughout last year were “misleading.” The company’s latest legal filing asserts that the alleged “New York customers” were foreign ECPs who worked through New York-based traders.

LEO, a token issued by Bitfinex’s parent company, iFinex, was revealed to have a major liquidity problem.

Recently released court filings from the New York Attorney General’s Office (NYAG) showed that Bitfinex and Tether both operated in New York from 2017 to early 2019, despite claiming they had ceased all operations in the state.

According to Paolo Ardoino, the chief technology officer (CTO) of Bitfinex, the crypto exchange has completed fundraising of $1 billion in tether (USDT).