Bitcoin adoption gets a boost as Brazil moves one step closer to implementing a legal framework. But is this because lawmakers believe in digital innovation? 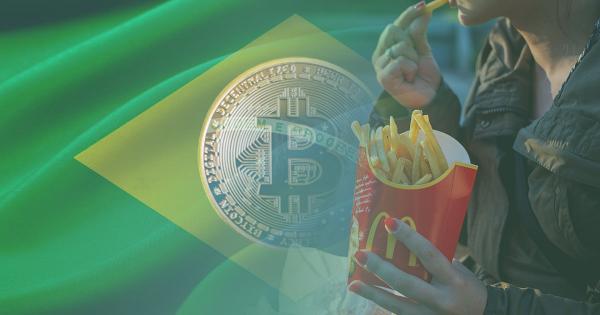 Photo by freestocks.org from Pexels and JoeBamz from Pixabay

Following the lead of El Salvador, nearby Brazil may soon be using Bitcoin as currency. That’s according to Federal Deputy Aureo Ribeiro, who said Brazilians will be able to buy houses, cars, and McDonald’s with the world’s largest cryptocurrency.

This is possible thanks to the passing of Bill 2.303/15 last Wednesday, which seeks to provide a legal framework for virtual currencies. But, the Bill faces a final hurdle in passing before the plenary of the Chamber of Deputies (Cámara dos Diputados) in the coming days.


The Chamber of Deputies is considered the lower house of the National Congress of Brazil, and it has 513 members who are elected every four years. The plenary is the Chamber’s foremost body, where deputies convene to discuss and vote for proposals.

Ribeiro said Brazil needs this to formalize the use of cryptocurrency and to attract foreign investment. The upshot will see Bitcoin being used in day-to-day transactions.

“We want to separate the wheat from the chaff, create regulations so that you can trade, know where you are buying, know who you are dealing with, and have this asset to buy a house, a car, go to McDonald’s to buy a hamburger, it will be a currency in the country as it happens in other countries.”

According to Ribeiro, the proposal has strong support in the Chamber of Deputies, and he sees few obstacles stopping its approval.

Strong support for Bitcoin in Brazil

A recent survey conducted by Sherlock Communications found almost half of respondents believe Bitcoin should be legal tender.

It found that 48% of Brazilians think their country should adopt Bitcoin, with 31% agreeing and 17% strongly agreeing with that statement.

“Brazilians were the biggest supporters of recognizing bitcoin in the region, with 56% supporting El Salvador’s approach and 48% saying they want Brazil to adopt it too.”

Researchers discovered 55% of Brazilians invest in Bitcoin to diversify. In comparison, 39% said they do so to protect against inflation and economic instability.

In response, the central bank has raised interest rates five times this year, with some analysts calling for even higher rates based on a belief that the current measures are not nearly enough to tackle spiraling prices.

Last weekend saw tens of thousands of protestors calling for President Jair Bolsonaro’s impeachment. They blamed President Bolsonaro for soaring unemployment and the spread of hunger among the population.

With civil unrest building, Bill 2.303/15, while highly irregular in the grand scheme of things, may see implementation off the back of politicians fighting to save their political careers.