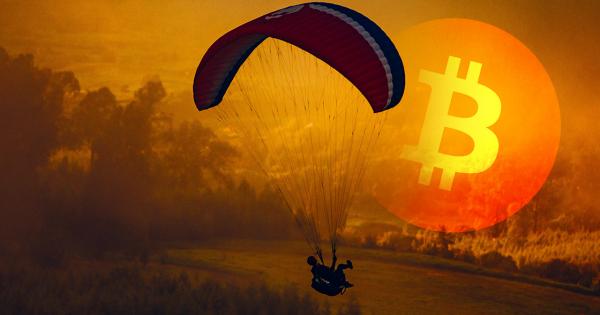 Bitcoin has gone through a significant bullish movement that has seen its price rise 190 percent since the low of Dec. 15, 2018, when it was trading at $3,130. Now that it recently moved above $9,000, BTC could be preparing for a downturn.

TD Sequential Indicator is on a green nine, which is a sell signal, predicting one to four weeks of downside before the continuation of the trend. The bearish signal comes after bitcoin reached the setup trendline at around $9,000 and found strong rejection around this area. The current candle is preceded by a reversal candlestick, which adds credibility to a possible retrace.

On the way down, the moving averages could serve as support to hold the price of bitcoin from dropping further or as bounce off points. The 100-week MA currently sits around $7,000, while the 50-week MA is trading at around $5,700. These two weekly moving averages could act as strong support points if bitcoin pulls back from its current trading range. 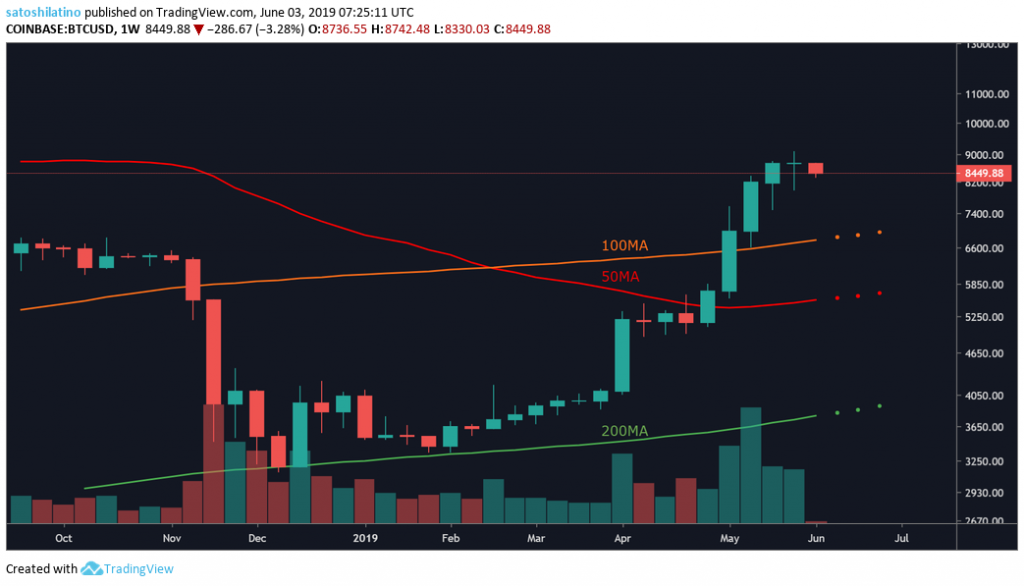 A series of support and resistance levels based on historical data can be drawn on the weekly chart. These price points have acted as barriers, preventing the price action of bitcoin from getting pushed up or down.

To the upside, if bitcoin continues rising it could find resistance at $9,600, but breaking above this level could take it all the way up to $11,000. 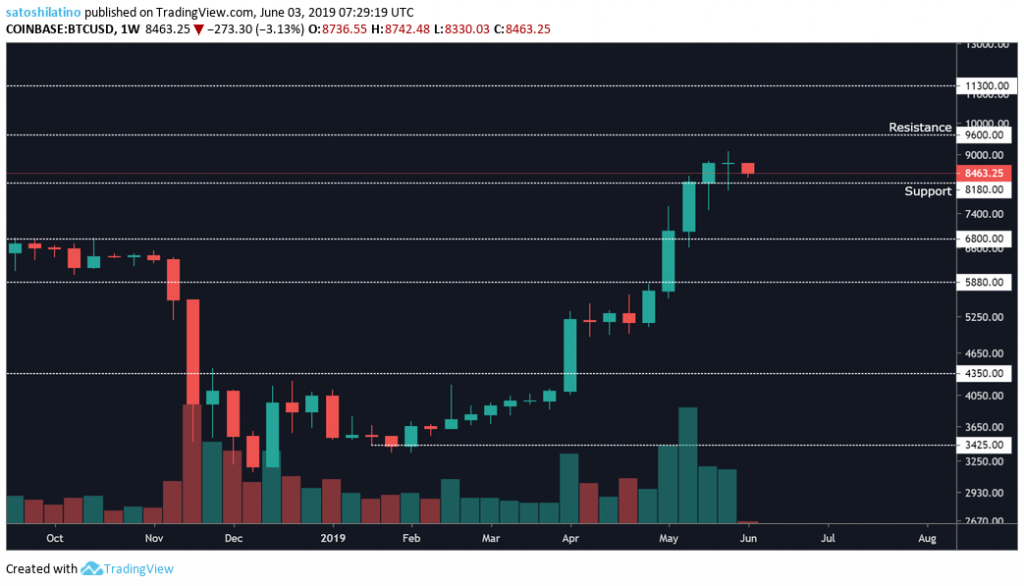 Bitcoin has been trading for five consecutive weeks above the upper Bollinger Band, which has been acting as support during this time span. Although it is too early to tell since the week just started, BTC is currently trading below the upper band indicating that a retrace could come. At the moment, the middle band or 20-week MA that sits around $5,300 will act as support if a drop was to come, based on this indicator. 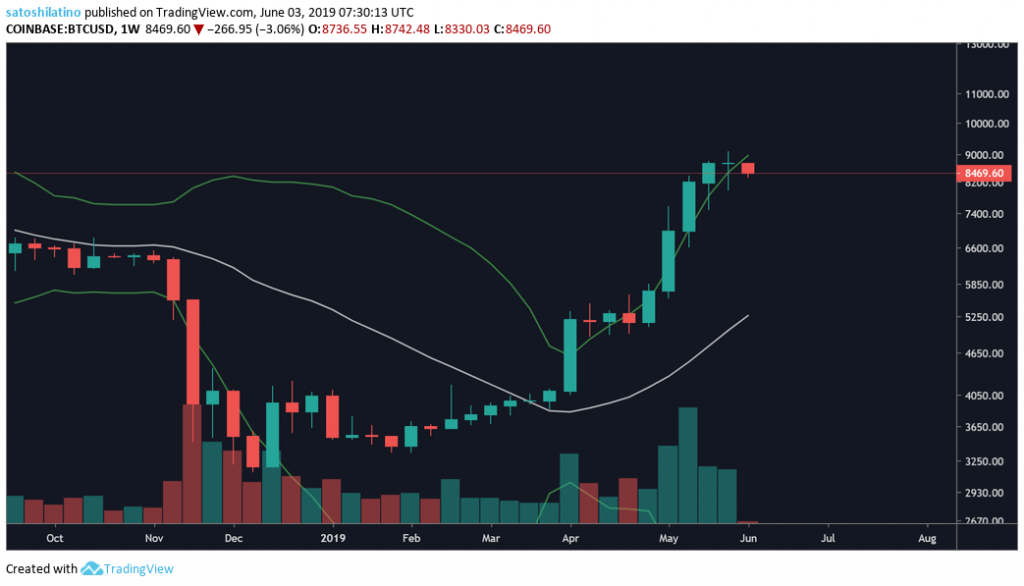 The relative strength index (RSI), which measures the magnitude of recent price changes, is sitting in oversold conditions and has been rejected by a major resistance level that dates back to 2017. The next point of support is around 62. 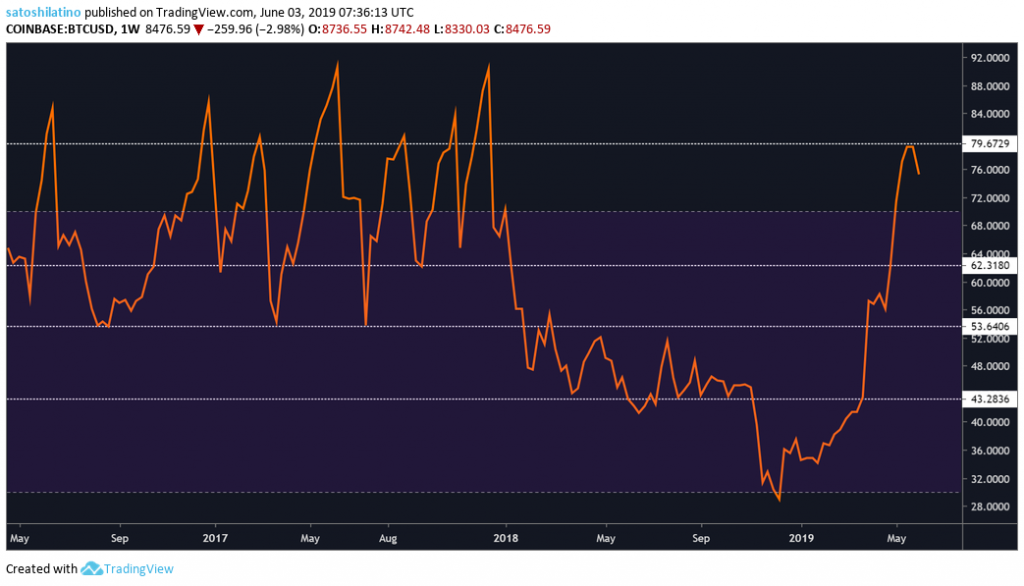 The Stochastic RSI has been on a systematic bullish move for 119 days so far. Now that it is sitting at oversold  a bearish cross between the moving averages can be seen, suggesting there is potential for a correction. 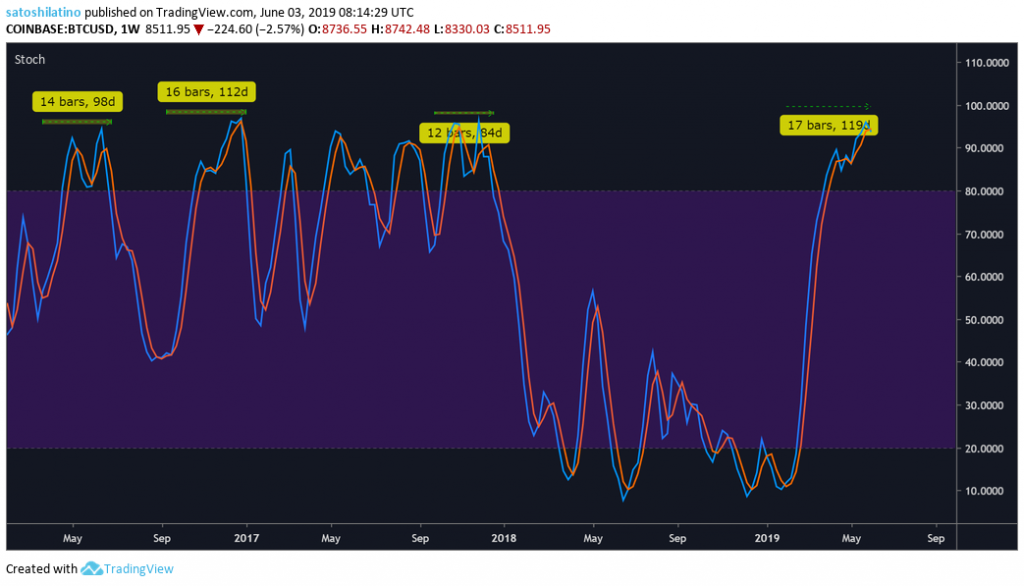 Based on the indicators previously analyzed, it seems like bitcoin could be preparing for a correction that could take its market valuation down to around $6,000. A reversal candlestick pattern that formed last week and a combination of the TD Sequential Indicator, the RSI and the StochRSI are all indicating that a pullback is likely. However, if bitcoin is able to move above the recent high of $9,090, it could try to reach the next resistance point at $9,600.