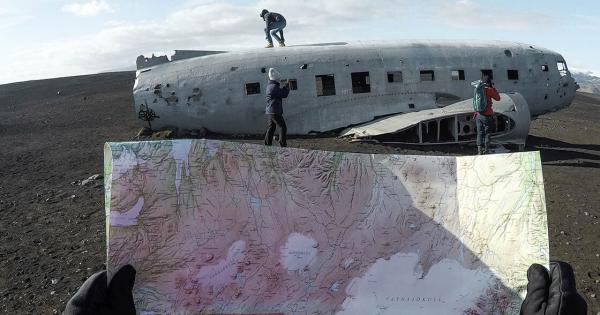 Dash went through a month-long consolidation period from April to May. During this time, it traded within a $21 range between $112 and $133. A bullish impulse allowed DASH to break above this range and surge all the way up to $177.

On the 3-day chart, dash found resistance around $172 and has not been able to move higher than this level. If it is able to break above it, dash could go up to the next resistance point around $210. Failing to trade higher than $172 could take dash down to find support at $153 or $133.

Dash can be seen trading above the 7-day MA on the 1-day chart, which is a bullish sign. If it continues to trade on top of this moving average the bullish trend will continue. 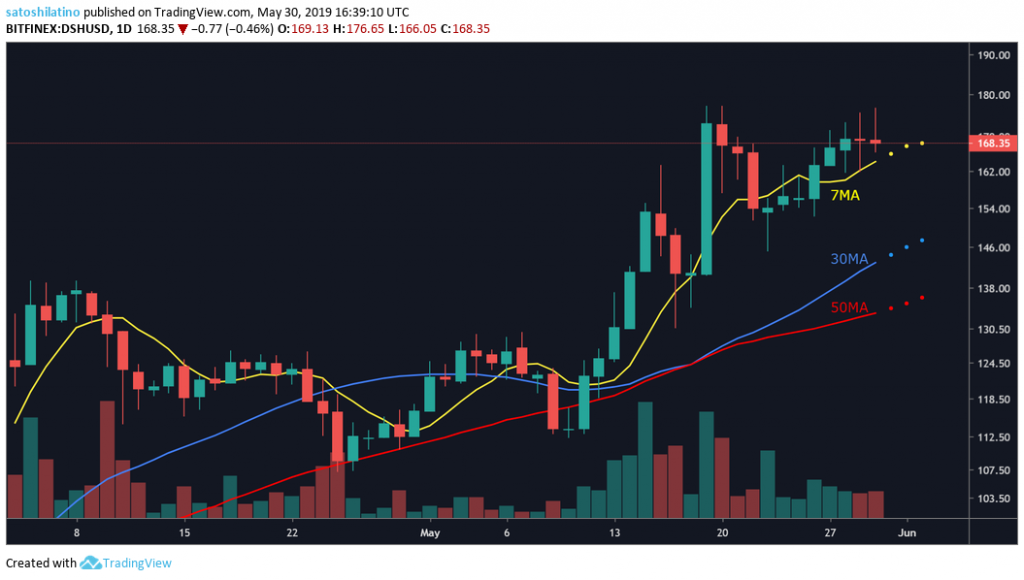 There is a bearish engulfing pattern developing on the 12-hour chart on the upper Bollinger Band, which is a bearish sign. A drop to the middle (21 MA) or lower band could be expected based on this timeframe. The bearish formation will be invalidated if dash trades higher than $176. 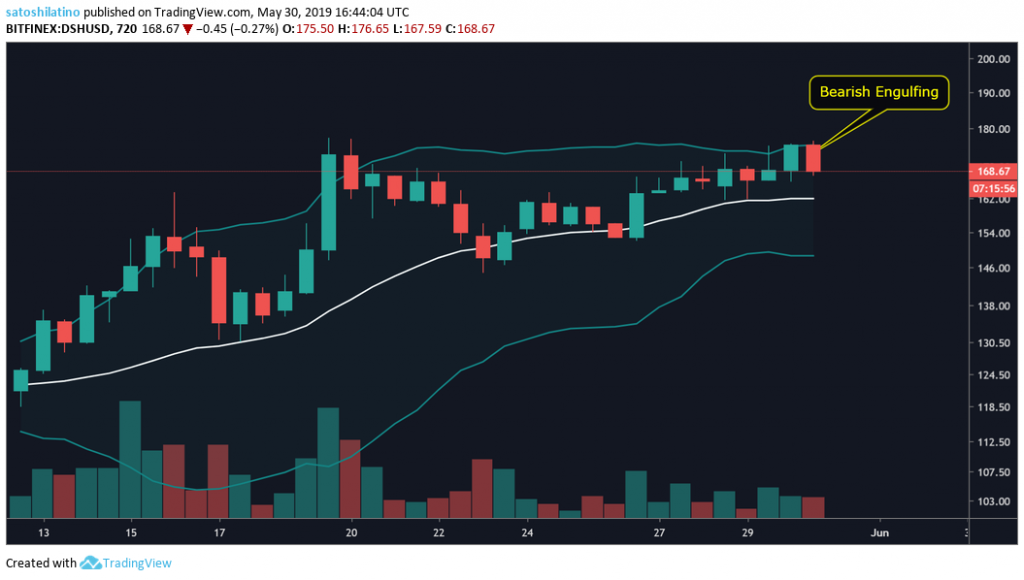 Cosmos was released into the market in late April so there is not enough data for a long-term analysis. However, based on the 4-hour chart and the 1-hour chart a short-term forecast for this cryptocurrency is possible.

A bull flag could be forming on ATOM’s 4-hour chart. The bullish pattern predicts a 22 percent move to the upside once the flag is broken, which is given by the length of the flagpole.

Nonetheless, the bull flag will be invalidated if Cosmos moves below $5.2. 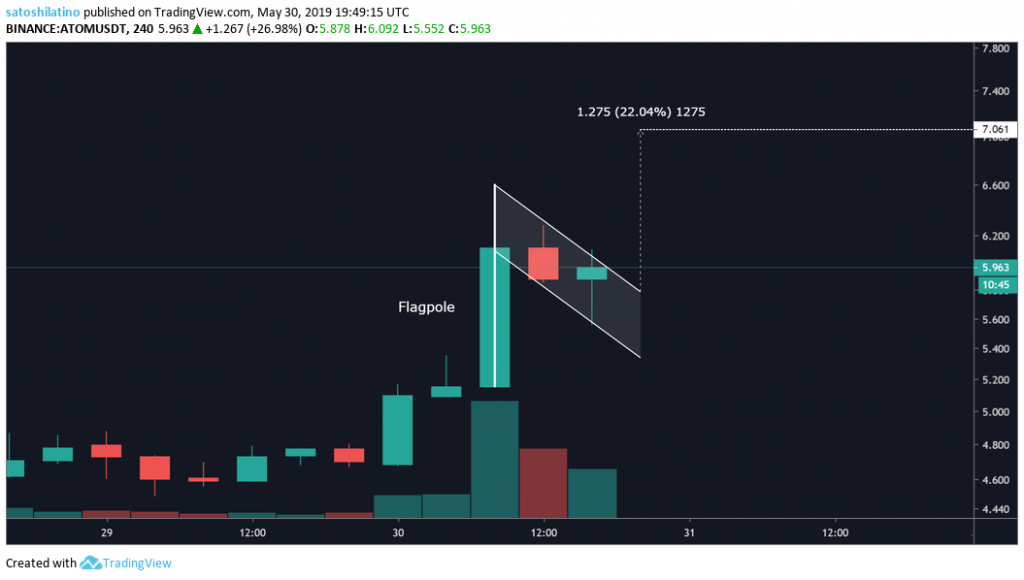 On the 1-hour chart, after reaching the upper Bollinger Band, Cosmos retraced to the middle band and bounced off. Now that the price is moving up once again and a double top could be expected that could retrace the market valuation of ATOM to $5.4 or $4.8.

However, if this cryptocurrency is able to break above $6.6 the bullish trend could get stronger pushing it to higher highs. 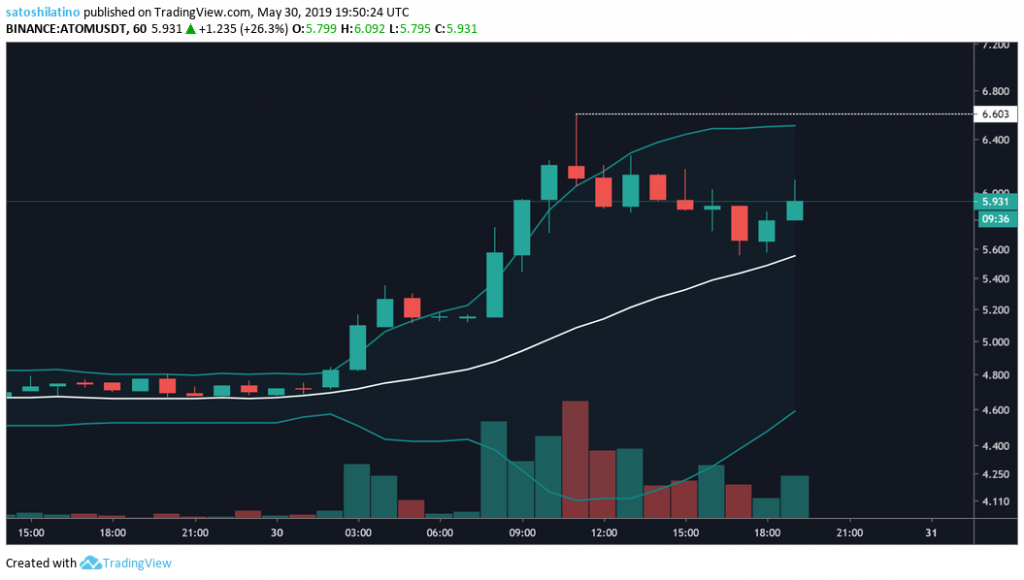 After a bullish engulfing candlestick formed around $0.047, NEM jumped and reached the $0.1 resistance level. A move above this level could take it up to $0.12 or $0.15 based on the 3-day chart. 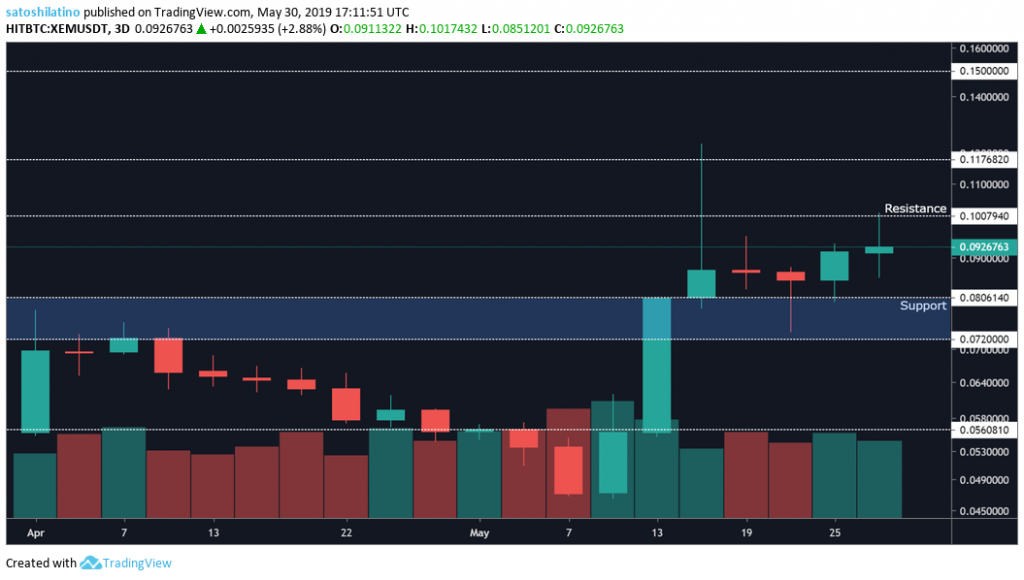 A double top could be forming on the 1-day chart. This is considered a bearish reversal pattern that developed after NEM reached a high of $0.1 two consecutive times. A pullback to the 50-day moving average could be expected, but if the bearish trend is strong XEM could go down to the 200 or 100-day moving average.

The bearish pattern will be invalidated if NEM trades higher than the most recent high of $0.123. 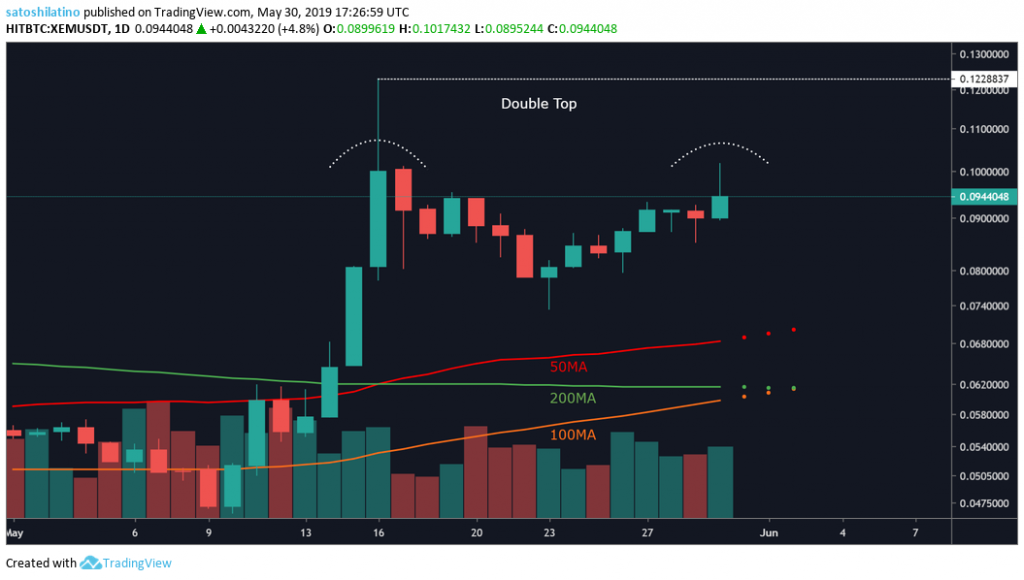 On the 12-hour chart, the major resistance point is at $0.1. Since XEM has not been able to close above this level, a pullback to the 50-MA could be expected, which is sitting around $0.0.74.

Nonetheless, if volume starts picking up and this cryptocurrency is able to break past resistance it could reach new yearly highs. 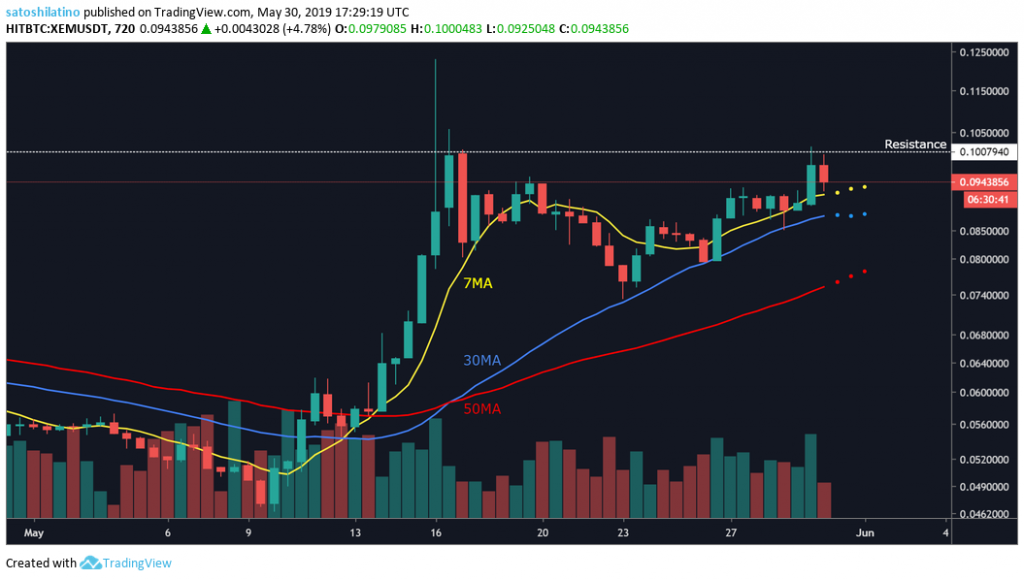 In the last two days, bitcoin diamond has moved up more than 80 percent, from $0.99 to $1.8 breaking past three levels of resistance. The significant surge that BCD experienced could make it retrace to $1.4 or $1.2 to consolidate before the bullish trend continues, based on the 3-day chart. 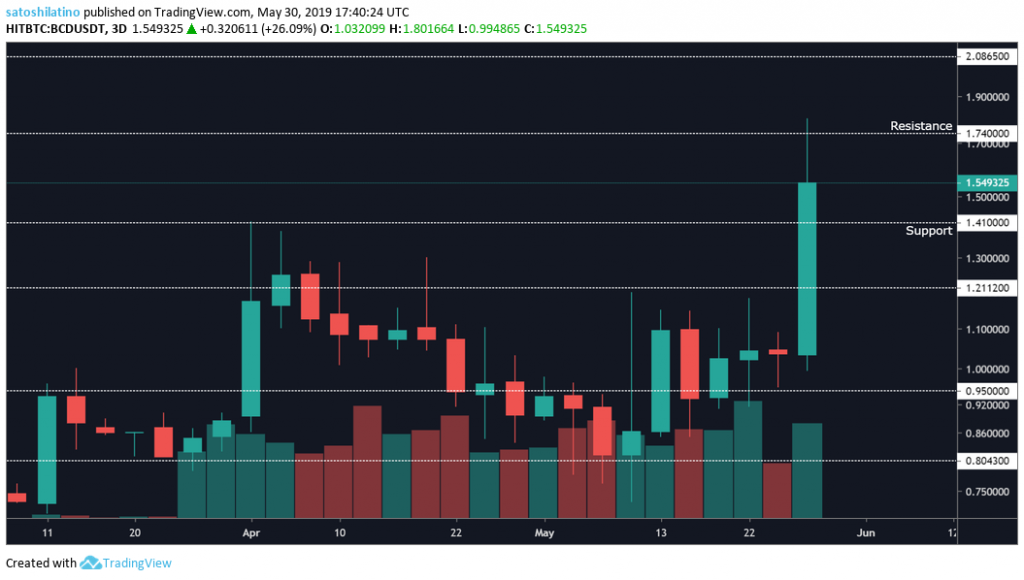 An ascending triangle formation seems to have been developed on the 1-day chart. BCD was able to move higher than the 40 percent target given by the bullish pattern. Now, this cryptocurrency could find a trading range before its next major move. 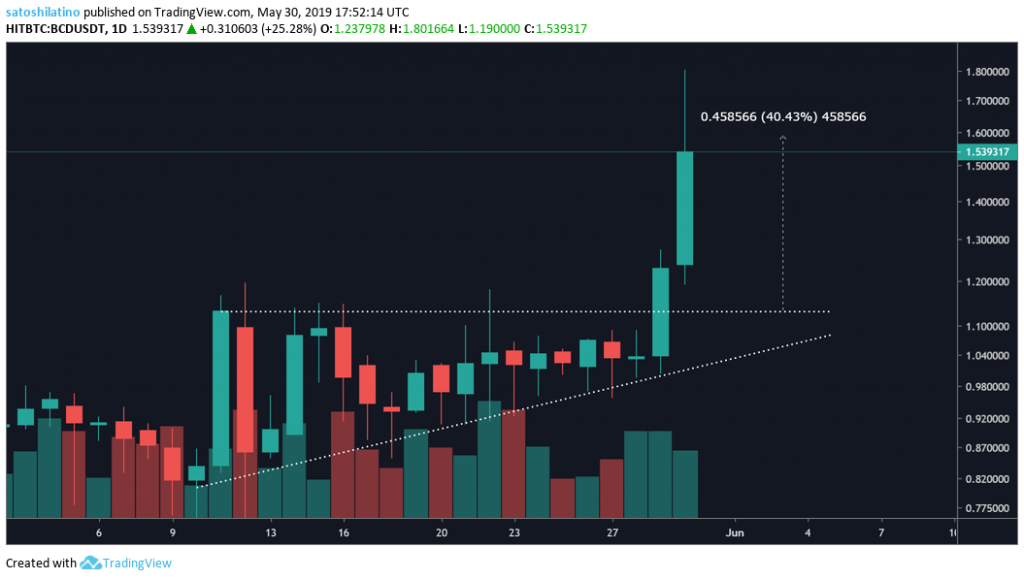 Digibyte has been trading inside a massive ascending parallel channel since Dec. 2018, reaching higher highs and higher lows which is a bullish sign. Currently, this cryptocurrency is trading at the top of the channel so a move to the middle or bottom of the channel could be expected. The most likely retrace point could be $0.014. However, if DGB is able to break above the parallel channel it could experience a strong bullish impulse. 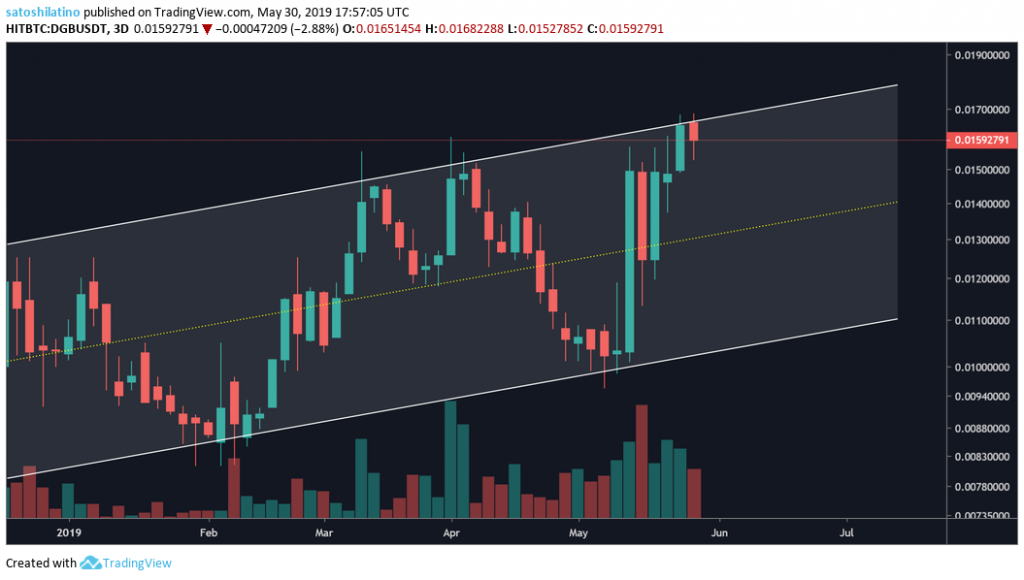 The TD Sequential Indicator gave an unperfected green nine candlestick, which is a bearish signal. If validated, digibyte could go down to test the support trendline sitting at $0.012. The sell signal will be invalidated if there is a green two trading above a green one candlestick on the 1-day chart, which could take DGB to new yearly highs. 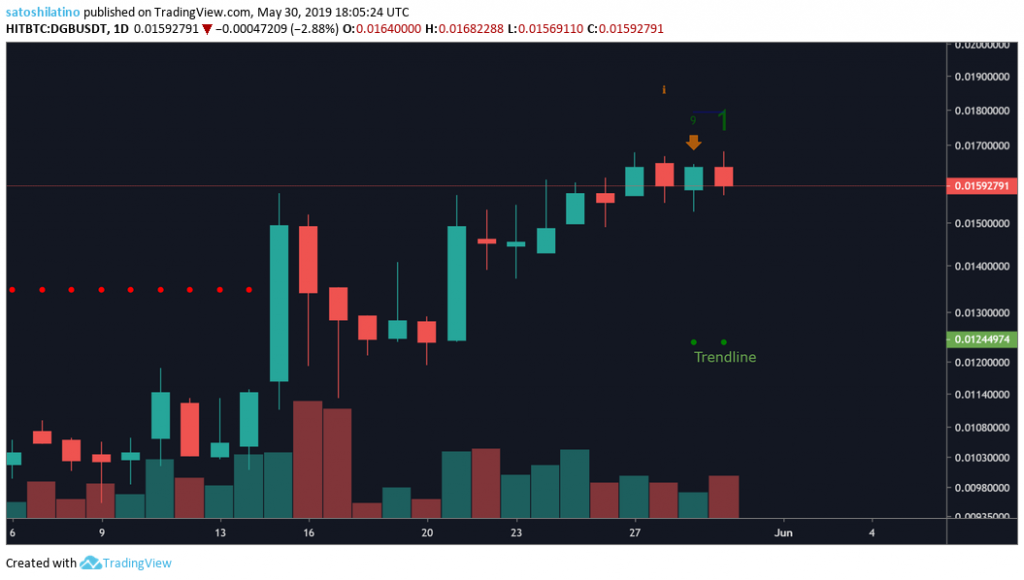 On the 12-hour chart, digibyte can be seen trading below the 7-moving average signaling that a correction could be coming. If DGB continues to move down it could try to test the 30 or 50-MA, between $0.0145 and $0.013. Conversely, if this cryptocurrency is able to trade on top of the 7-MA once again, the bullish trend will continue. 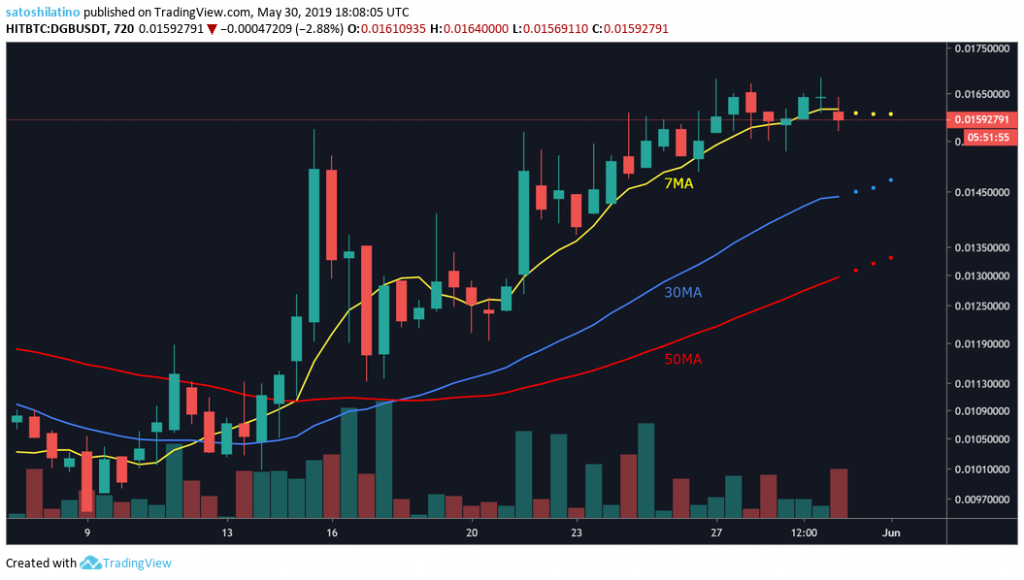 The market could undergo a sustained correction after the significant surge in prices that most cryptocurrencies have had. The retrace could be considered as a take profit period that has the potential to open the doors for a stronger bullish trend.

It is worth noting that bitcoin went through a bull trap in 2015 that took its price down to test its previous low. This is a bearish pattern that tricks investors into believing that a new bullish trend has started when, in fact, after reaching a certain high the market goes back to test new lows.