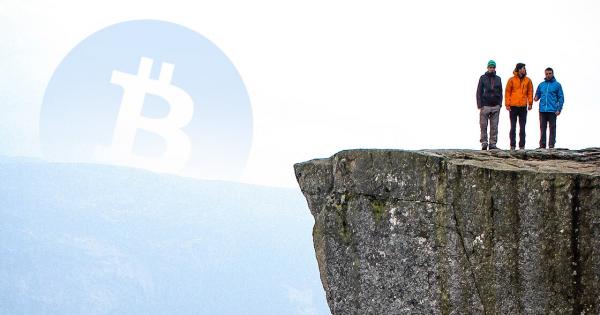 Bitcoin dropped $700 in 30 minutes and hit $9,500 after hovering over $10,000 for more than a week. Despite the bullish sentiment seen across the market as Bakkt’s Bitcoin futures launch approaches BTC could be signaling that a shakeout is underway.

After testing the support given by the 200-twelve-hour moving average 8 different times, Bitcoin finally broke below it. As a result, the pioneer cryptocurrency plunged 6.60 percent within minutes. Although there are almost 3 hours to go before the close of the current candle on the 12-hour chart, it seems like BTC could continue declining.

Based on the 1-day chart, there are three different technical patterns that could be developing: a bull flag, a symmetrical triangle, or a descending triangle.

Bitcoin could be continuing its trajectory within a descending parallel channel, which is part of a major bull flag that has been forming since mid-June. This is considered a continuation pattern that developed after the 84.50 percent upswing BTC experienced from June 10 until June 26, known as the flagpole—which was succeeded by the current consolidation period, known as the pennant.

At the moment, this cryptocurrency appears to be testing the support given by the middle line of the descending parallel channel. Falling below this area will likely accelerate the selling pressure behind BTC, taking it to the bottom of the channel. Conversely, if the middle line of the channel is able to hold, Bitcoin could rebound to the top, which could lead to a breakout.

Bitcoin could be breaking down out of a symmetrical triangle that seems to be developing under the same timeframe. This technical formation represents a period of consolidation before the price is forced to breakout in a negative or positive trend. A move below the lower trendline marks the start of a new bearish trend. Meanwhile, a move above the upper trendline indicates the start of a new bullish trend.

Instead of a bull flag or symmetrical triangle, if a descending triangle is actually forming on the 1-day chart Bitcoin could be about to rebound to the resistance trendline. This is considered a bearish pattern that shows that demand for BTC is weakening. A break below the lower support signals that the downside momentum is likely to continue or become even stronger. By measuring the height from the upper and lower trendline, the symmetrical triangle forecasts a bearish target of 30 percent.

Nonetheless, descending triangles can also form as a continuation pattern to an uptrend. Thus, if Bitcoin breaks to the upside instead, it could try to reach $12,770.

Based on the 1-day chart, three patterns with different outlooks appear to be forming, which could determine where BTC is heading next.

On one side, a bull flag is developing that could lead to a 45.80 percent upswing, if validated. On the other, BTC could breaking down from a symmetrical triangle which predicts a 34.50 drop. And on the last one, the pioneer cryptocurrency could be about to rebound to the resistance trendline to form a new lower high.

Due to the opposing views of the patterns analyzed, it will be wiser to wait for a breakout or breakdown of the 23.6 to 38.2 percent Fibonacci retracement area before entering a trade.