Is money even real anymore? The NFT sector is making it seem so. 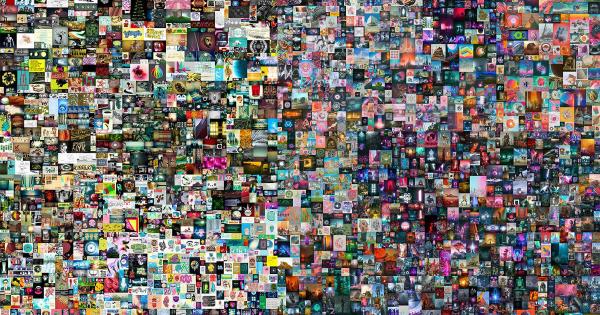 It is now the world’s third most expensive piece to be sold by a living artist.

.@beeple's piece is now the fourth most expensive artwork by a living artist of all time.

I think this ends the debate on if NFTs are here to stay.https://t.co/AsiTiQBIFY https://t.co/1VSOJH2CIs pic.twitter.com/QmxMEC5moC

The art, called “Everydays: The First 5000 Days,” made Winkelmann one of the biggest grossing artists of all time behind David Hockney’s 2018 painting “Portrait of an Artist (Pool with Two Figures)” (which sold for $90.3 million” and Jeff Koons’ stainless steel sculpture “Rabbit,” which holds the record after a $91.1 million sale in 2019.

The piece is a collage of 5,000 images that took over 13 years to make. It started out with a bid of just $100, but an estimated 350 prospective buyers ended up creating a frenzied bid.

How it started V How it's going pic.twitter.com/krj6c5z16L

But who paid up the fortune to own the collage anyway? As per some reports, it was none other than Tron’s flamboyant, attention-loving founder Justin Sun. He won the bid at $60.25 million, with the remainder going to Christie’s as a “buyers premium.”

Sun, however, denied those claims later and said someone else outbid him at the last moment. “My final effective bid was $60 MIL (plus fee $69 MIL). However, was outbid by another buyer in the last 20 secs by $250k. Difference was less than 0.3% of the total price,” he said in a tweet.

The rise of NFTs

NFTs are cryptographic representations of tangible or non-tangible items on the blockchain, acting as proof of ownership to whatever assets they represent. The latter can include digital collectibles, virtual lands, real estate, or digital art.

They went from near-obscurity in 2019 to becoming a $16 billion industry today, buoyed by celebrity interest in the space (they are not for the technology) and the efforts of legendary art houses like Christie’s to hold and support NFT auctions.

Artists like Beeple are fully supportive of how the technology helps them connect to a wider audience, and how those audiences can truly, verifiably own whatever they buy. He said in a statement after the Christie’s sale:

“Artists have been using hardware and software to create artwork and distribute it on the internet for the last 20+ years but there was never a real way to truly own and collect it. With NFTs that has now changed.”

Meanwhile, data shows the NFT sector is leading gains in the crypto market. The sector has gained over 57% (as a whole) in the past week and 15.55% in the past 24 hours, with Theta’s $7 billion valuation making it the biggest NFT/smart contract by market cap.

Logan Paul sells $3.5mn worth of non-fungible tokens (NFTs) on the first day of release.