Cryptocurrencies and traditional financial institutions have a complicated relationship. 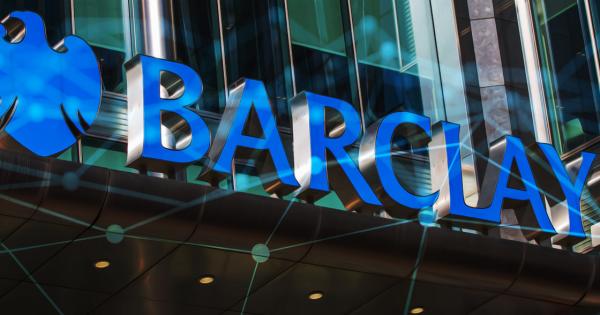 Cryptocurrencies and traditional financial institutions have a complicated relationship. To use a sports metaphor, crypto is the inexperienced rookie ready to make its mark, and big banks are a trustworthy veteran. They provide steady performance and reliability that only stems from experience, but that doesn’t always mean they are the best option.

In most circumstances, big banks give the thumbs down to cryptocurrencies. One industry leader, JP Morgan Chase CEO Jamie Dimon, frequently makes vociferous comments about crypto, and his company restricts nearly all participants in the crypto economy.

One of the outliers, Goldman Sachs, has a crypto trading desk, but that’s a modest appropriation for a market that, at one point, exceeded an $800 billion market cap. When Cboe and CME Group launched their Bitcoin futures contracts, institutional interest was tepid at best.

On Thursday, reports surfaced that Barclays, an international banking juggernaut listed on the New York Stock Exchange, is doing business with crypto-related companies.

More specifically, Barclays signed popular crypto exchange, Coinbase, as a customer. By having an account with such a sizable bank, it will be significantly more straightforward for Coinbase customers in the UK to buy and sell digital currencies on the platform. As Reuters notes,

“The Barclays account will make it easier for British customers. Previously, they had to transfer pounds into euros and go through an Estonian bank.”

Before the contract was signed, Coinbase demonstrated sufficient ability to obstruct money laundering operations, a common complaint of digital currency exchanges. According to research and consulting firm, Deloitte,

“the European Commission held a roundtable on 26 February 2018. The EU proposed that virtual currency exchanges and wallet provides should be subject to the Anti-Money Laundering Directive since crypto assets present risks relating to money laundering and the financing of illicit activities.”

The signed contract would seem to indicate that Coinbase presented compelling anti-money laundering initiatives for their exchange.

A Perfect Market for Adoption

The U.K. houses Coinbase’s largest customer base in Europe, and according to their representatives, its U.K. market is growing twice as fast as other parts of the world.

“Coinbase has also received a license from the U.K. financial regulator to issue electronic money and provide payment services in the U.K. and across the EU.”

This should significantly speed up crypto transactions in the U.K. Under the current setup, multi-day waiting periods are not uncommon as digital currencies clear hurdles and make their way into customer accounts.

In December, Coinbase was the most downloaded app in Apple’s app store as millions of new crypto investors looked for a reliable, easy-to-use platform to enter crypto markets.

This news comes on the heels of a busy few weeks for crypto exchanges. In January, the self-described largest crypto exchange in Japan, Coincheck, endured a significant hack that cost the company more than $500 million.

The hack brought the full weight of the Japanese government crypto exchanges, and several were temporarily shuttered while security issues were addressed.

This week, Coincheck announced that it made reparations to customers who lost money in the hack and that it was resuming operations in a limited capacity.

Barclays’ agreement with Coinbase is an indication that some exchanges are maturing beyond the amateur technology implemented when crypto markets first began heating up. It’s evident that investors view cryptocurrencies much different in 2017 than they did in 2018, and partnerships like the one between Barclays and Coinbase is a reason to have confidence in the future of crypto.