American billionaire investor Charlie Munger argued that Bitcoin is "disgusting and contrary to the interests of civilization.” 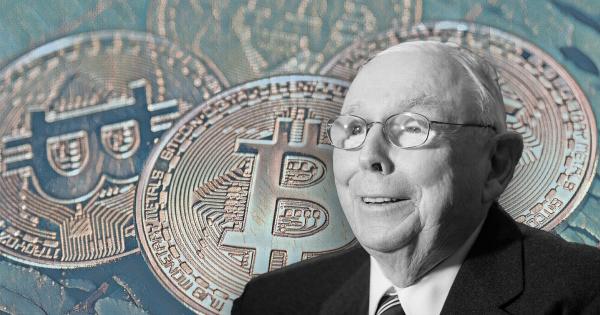 “Of course I hate the Bitcoin success,” said during a Q&A session, adding, “I don’t welcome a currency that’s so useful to kidnappers and extortionists and so forth, nor do I like just shuffling out of your extra billions of billions of dollars to somebody who just invented a new financial product out of thin air.”

“I should say modestly that I think whole damn development is disgusting and contrary to the interests of civilization.”

He owns banks that launder billions per year & have been charged criminally.

Give me a break.

“Disgusting and contrary to the interests of civilization”

According to CNBC’s report published Sunday, Berkshire Hathaway CEO Warren Buffett, who also attended the meeting, refused to comment on Bitcoin directly. After hearing Munger’s reply, however, Buffett noted that he himself is “alright on that one.”

According to Buffett, he didn’t want to directly comment on Bitcoin to avoid any criticism from crypto enthusiasts. Munger, on the other hand, wasn’t so subtle.

“I think I should say modestly that the whole damn development is disgusting and contrary to the interests of civilization,” he said.

In February, Munger also argued that Bitcoin is “really kind of an artificial substitute for gold” at Daily Journal’s annual shareholders’ meeting in February.

“And since I never buy any gold, I never buy any Bitcoin. Bitcoin reminds me of what Oscar Wilde said about fox hunting. He said it was the pursuit of the uneatable by the unspeakable,” he said at the time.

Bitcoin may be contrary to Charlie Munger’s idea of civilization.

But for many less privileged than he, a neutral, open-source, permissionless, censorship/confiscation-resistant financial system beyond the control of corps + govts is *much* more civilized than the status quo. https://t.co/gFGsEY2ntN

“I don’t think these Bitcoin collections are going to be worth anything when the music stops. You can’t do anything with a Bitcoin. Once nobody wants your Bitcoin, it’s completely worthless,” Schiff argued, adding, “Bitcoin is not a currency, it’s not used as a medium of the exchange really, or a unit of account. It’s just used for speculation.”

In all fairness, however, Schiff also opined that both the US dollar and the American economy are destined to collapse in the future—the main question being which one of them will go first.

“The Bitcoin bubble might pop before the dollar bubble. We may have a cryptocurrency crisis before we have a dollar crisis,” Schiff asserted.