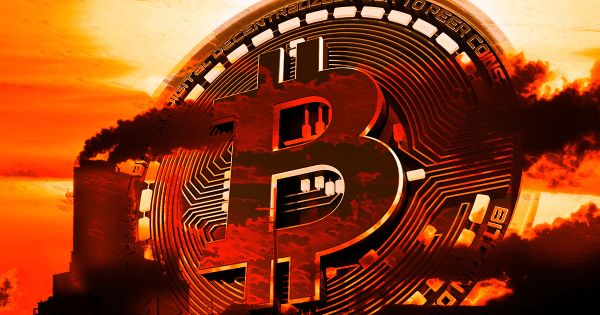 The Cambridge Centre for Alternative Finance (CCAF), which tracks the electricity consumption of Bitcoin (BTC) mining, added the sources of energy in a major update on Sept. 27. According to the data, the sustainable electricity mix in bitcoin mining declined by 13% in 2021, compared to 2020.

Electricity produced from oil increased marginally to 1.47% from 1.21% the year before. Coal remained the largest source of Bitcoin mining electricity, despite its share falling to 38.23% from 40.37% in 2020.

As a result of the increasing use of fossil fuels, non-renewable energy sources accounted for 71.47% of the electricity consumed by Bitcoin mining in 2021, the data indicates.

The use of hydroelectricity saw the sharpest decline, dropping from 33.67% in 2020 to 18.5% last year. However, hydropower remained the largest source of renewable energy for Bitcoin mining.

The decrease in renewable energy usage, in turn, pushed greenhouse gas emissions from Bitcoin mining to an all-time high of 56.29 million tonnes of carbon dioxide equivalent (MtCO2e) in 2021. It indicated an increase of over 63% from the 34.37 MtCO2e emitted in 2020.

Why the sustainability mix of bitcoin mining power deteriorated

According to Cambridge analysts, China’s ban on Bitcoin mining imposed in June 2021 played a role in the sustainability mix of BTC mining power. In a report, the analysts noted that before the mining ban, miners in China seasonally migrated within the country.

“…the Chinese government’s ban on cryptocurrency mining and the resulting shift in Bitcoin mining activity to other countries negatively impacted Bitcoin’s environmental footprint.”

But the impact of China’s mining ban was limited since China’s share of mining power fell to zero, irrespective of the brief spike in September 2021.

However, as the miners relocated to other countries after the Chinese mining ban, the relocation region impacted the sustainability mix of Bitcoin mining electricity.

For instance, in countries like Kazakhstan, where several Chinese miners relocated, electricity is primarily produced from fossil fuels. Sustainable energy sources only account for 11% of the electricity mix in the country.

But in Sweden, which only accounts for a minuscule share of Bitcoin mining, 98% of electricity is generated from renewable resources. Therefore, the environmental footprint of Bitcoin mining depends on the mining hashrate in each country.