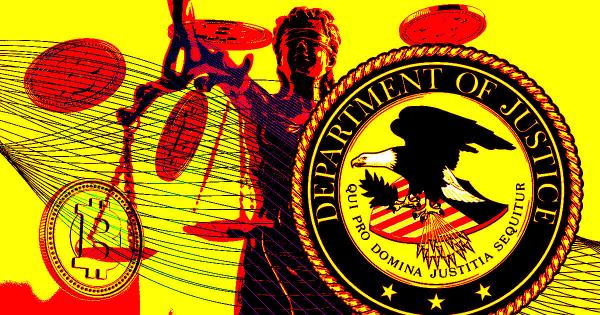 The U.S. Department of Justice (DOJ) has indicted  California-based John Khuu for allegedly laundering $5.4 million in proceeds from drug trafficking by using Bitcoin.

According to the charges, Khuu sold counterfeit pharmaceutical drugs and controlled substances on dark web markets. He received BTC as payment from customers for their purchases.

To convert the funds for fiat, Khuu and his accomplices created dozens of accounts with top U.S. banks including Citibank, Bank of America, and JPMorgan Chase.

The accused allegedly laundered about $5.4 million worth of BTC over the period of his operation.

Khuu was arrested on Aug. 19, 2022, by the DOJ. He is currently facing a two count-charge for conspiracy in money laundering and unlawful importation of controlled substances. If proven guilty, he could risk spending up to 40 years in imprisonment.

Crypto-related laundering on the decline

Instances, where crypto was used in the dark web market, have painted the industry in a  bad light before authorities. In 2020, the DOJ busted Ohio-based Larry Harmon for allegedly laundering over $300 million using Bitcoin.

In recent times, the narrative is changing for good. A Chainanysis report showed that in 2021, only about 0.05% of all crypto transactions were linked to money laundering, compared to 5% laundered through fiat currency.