How NFTs are boosting efforts to save endangered Rhinos

In another example of blockchain technology’s prowess, the Union of European Football Associations (UEFA) revealed that it distributed 100 percent of the tickets for a recent football match solely using blockchain.

According to the official UEFA website, tickets for the UEFA Super Cup final between Real Madrid and Atletico Madrid, held in Tallinn, Estonia, were distributed via a mobile phone-based blockchain application. The blockchain experiment was deemed a success by the football association.

In May 2018, UEFA distributed a little over 50 percent of tickets for the Europea League Cup final in Lyon, France, through a blockchain application. At the time, UEFA was pleased with the “successful implementation” of blockchain within its existing software infrastructure.

Furthermore, UEFA has decided to continue using blockchain technology for future matches, as noted by the announcement:

“UEFA is looking to make its ticket sales process for matches more simple and safe—thanks to a new system aimed at providing secure ticket distribution, and which prevents the replication and duplication of tickets.”

The mobile application used to distribute the tickets was available for both iOS and Android devices.

Footballers Warming Up to Cryptocurrency

The football world is no stranger to cryptocurrencies, blockchains or ICOs.

In the same month, England’s Arsenal F.C. revealed a $70 million partnership with a pre-ICO firm, called CashBet, which positioned itself as the football club’s “official blockchain partner.”

Apart from football teams, players have taken the risky step of promoting several ICOs and cryptocurrency projects. Ronaldinho and Michael Owen, for example, have chosen to represent investment-focused platforms, while Lionel Messi is on board with the crypto-powered mobile phone maker Sirin Labs. 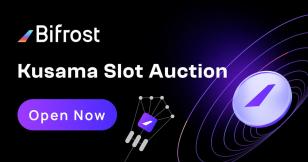 According to the official announcement by Polkadot, Kusama’s first parachain slot auction will begin on June 15th, and the much-anticipated auction moment will soon come as scheduled.