The crypto market is hanging on by a thread according to this chart, but all hope isn’t lost Cole Petersen · 2 years ago · 2 min read
News › Bitcoin › Analysis

The crypto market is hanging on by a thread according to this chart, but all hope isn’t lost

It’s been a rough past few weeks for the crypto market, with the Coronavirus-induced turbulence in the global markets catalyzing an intense and far-reaching selloff that has devastated traditional markets and nascent ones alike. 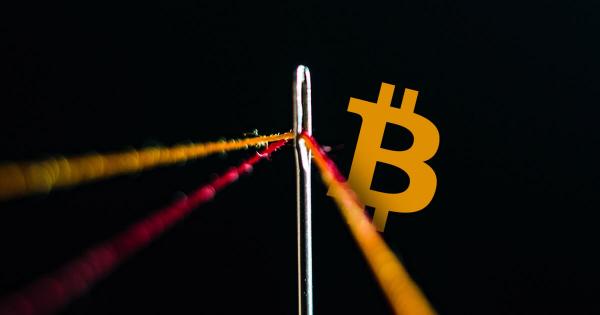 It’s been a rough past few weeks for the crypto market, with the Coronavirus-induced turbulence in the global markets catalyzing an intense and far-reaching selloff that has devastated traditional markets and nascent ones alike.

This selloff has led Bitcoin down to a critical support level that bulls have been attempting to defend over the past several days and weeks, with a break below this level opening the gates for significantly further losses for all cryptocurrencies.

All hope is not lost, however, as one prominent analyst is noting that there are multiple bullish factors currently counting in the benchmark cryptocurrency’s favor.

If these factors lead bulls to prevail over bears, a strong defense of this support could help lead the market higher in the days and weeks ahead.

Bitcoin is currently incurring some slight selling pressure that has forced it to break below $6,000 – a level at which it has been trading sideways at for the past couple of days.

This downwards pressure marks an extension of that which was first incurred when Bitcoin faced a notable rejection at $6,900 earlier this past week, with its steady decline from this level seem to confirm that this latest uptrend was simply a dead cat bounce that will be followed by further downside.

It appears that the massive decline the crypto’s price has seen over the past couple of weeks has led it to a key support region within a macro trading channel.

This has caused one popular cryptocurrency analyst to offer a chart showing that a break below this level would likely lead BTC straight down to the lower channel boundary around $2,000.

In the near-term, Big Cheds, a well-respected crypto trader, explained that there are multiple factors currently counting in Bitcoin’s favor.

“Bitcoin weekly chart – With seven hours to go, we can see the MA 200 recapture, bullish harami, inside bar and hidden bull divergence re RSI.”

These factors could bolster Bitcoin’s weekly close and provide it with some serious momentum as it goes into the week ahead, subsequently allowing the aggregated market to also climb higher.