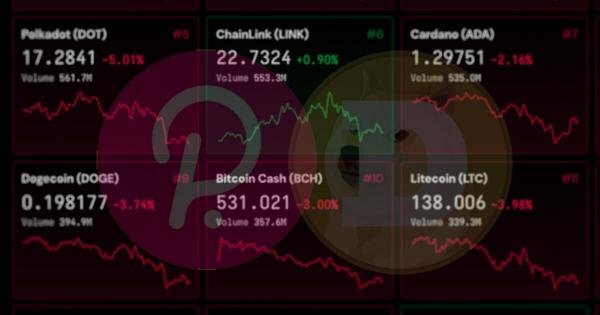 The crypto market saw a minor sell-off this morning on the back of regulatory developments out of America, with some large-cap cryptocurrencies dropping as much as 5%.

Leading the red charts were high-speed blockchain protocol Polkadot and meme coin Dogecoin—both fell -5% as of Tuesday morning but were slightly recovering as of press time. DOT trades at $17 as of Tuesday afternoon, while DOGE saw buying at the $0.19 price level.

Ethereum, the world’s most used blockchain, dropped -4.5% Tuesday morning, from $2,600 to nearly $2,400, but continues to trade above its 34-period moving average. However, the dip is likely to be brought up: The asset has positive catalysts lined up for later this month, with the ambitious EIP-1559—a proposal to make Ethereum transactions more efficient by using a hybrid system of base fees—set to be deployed on the mainnet soon.

The downward price move caused over $352 million worth of ‘liquidations,’ data from on-chain analytics tool Bybt shows. ‘Liquidations,’ for the uninitiated, occur when leveraged positions are automatically closed out by exchanges/brokerages as a “safety mechanism.”

Futures and margin traders—who borrow capital from exchanges (usually in multiples) to place bigger bets—put up a small collateral amount before placing a trade. The capital is then liquidated as prices move against the trader’s position.

Over 53,891 traders were liquidated in the past day, with the largest single liquidation order occurring on futures powerhouse Bybit—a Bitcoin (BTC) valued at over $6 million

3 reasons Ethereum dropped much harder than Bitcoin in abrupt correction