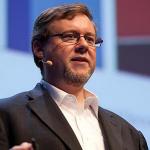 Jeff Garzik, better known as the CEO of blockchain startup Bloq, now believes his prior work could be revived in a way that promotes interoperability between the increasingly fragmented set of protocols bearing the bitcoin name. He was also a contributor to Bitcoin Core.

Jeff has a long history of early technology adoption. After helping to inaugurate CNN.com on the Internet in the early 1990s, he worked for a succession of Internet startups and service providers. At the same time, he worked continuously on open source software engineering projects for over two decades.

Involvement in one of the best known open source projects – the Linux kernel – led to an extended tenure at Linux leader Red Hat during open source’s most formative years. Jeff’s work is found in every Android phone and data center Linux installation today.

In July 2010, Jeff stumbled across a post describing bitcoin. Immediately recognizing the potential of a concept previously thought impossible — decentralized digital money, he did what came naturally: developed bitcoin open source software. That gave rise to the start of micro-businesses with bitcoin at their foundation. Almost by accident, Jeff found himself at the heart of the global, revolutionary, technology phenomenon known as bitcoin.

Bitcoin and blockchain served as a springboard for many new ideas and ventures, including sending objects into outer space.

What’s going on with Bitcoin Cash?