Moneygram has revealed that it has bought 4% stake in crypto ATM operator, Coinme. 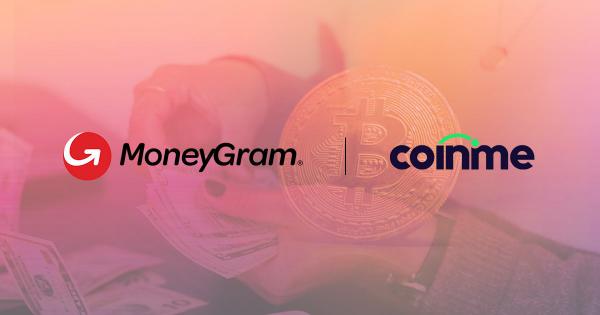 One of the major reasons investors keep flocking to crypto is the enormous potential the space has. While institutional investors dominated the space in 2021, it appears they have continued in the same vein in this new year.

The latest institutional investor to enter the fray is Moneygram International who recently invested in Coinme, a cryptocurrency ATM operator.

On Wednesday, Moneygram announced that it had completed a strategic minority investment in Coinme, a leading United States-based cryptocurrency cash exchange.

The announcement revealed that the leading cross-border P2P payments company investment in the crypto firm gave it a 4% ownership stake.

Coinme is an America-based crypto firm licensed to operate in 48 states of the country. The firm was the 78th fastest expanding tech corporation in North America.

While speaking on the investment in Coinme, Moneygram chairman and CEO Alex Holmes noted that the company is optimistic about the several opportunities that the evolving crypto industry has brought.


In the long run, he believes that this partnership will help push both firms to be financial leaders in their space.

At Moneygram, we continue to be bullish on the vast opportunities that exist in the ever-growing world of cryptocurrency and our ability to operate as a compliant bridge to connect digital assets to local fiat currency.

With this investment by Moneygram, it is expected that Coinme’s international expansion effort and other growth initiatives will move forward.


As for Moneygram, the partnership will further strengthen its position as the industry leader in terms of blockchain technology utilization.

The two firms had previously partnered to develop a crypto-to-cash model by building a bridge connecting the flagship crypto-asset to local fiat currency.

Our unique cash-to-bitcoin offering with Coinme, announced in May of 2021, opened our business to an entirely new customer segment and couldn’t be more pleased with our progress.

Like we stated earlier, Moneygram’s strategic partnership with Coinme would help bolster its international expansion plans. The ATM operator currently has nearly 6,000 ATMs located in Coinstar kiosks across 44 states in the United States, and it has set eyes on expanding its services across the world.

Crypto ATMs have become quite popular as available data shows that there are approximately 34,000 Bitcoin ATMs installed globally as of December 2021. In 2020, there were less than 13,000 ATMs around the world.

A crypto ATM is quite similar in operation to the regular ATMs being used by financial institutions that allow their customers to perform certain financial transactions.


The significant difference between both is that crypto ATMs would enable their users to purchase crypto-assets like Bitcoin, Dogecoin, and others depending on the digital asset integrated into it.