IOTA, one of the fastest growing blockchain foundations on the world, announced that it will sponsor the first inaugural Texas Smart Cities Summit, an event that aims to accelerate smart city efforts in the state of Texas. 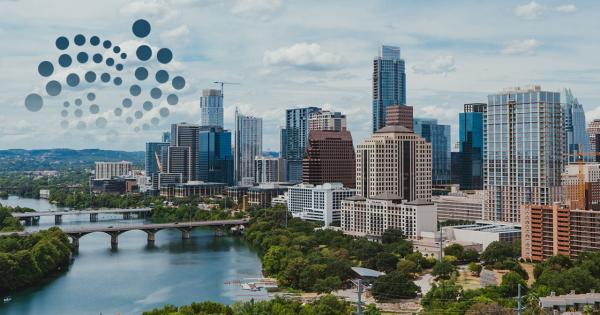 IOTA, one of the fastest growing blockchain foundations on the world, announced that it will sponsor the first inaugural Texas Smart Cities Summit, an event that aims to accelerate smart city efforts in the state of Texas. The company will also hold several events throughout the summit, it said in a statement.

Smart Cities Initiative gets a boost from IOTA

The technology that has enabled digital coins has the potential to be implemented in virtually any industry—from supply chains and fashion, to finance and government. Several major corporations have begun experimenting with cryptocurrency, and a handful of local governments have followed suit.

Texas is one of those pioneers. A cohort of companies, organizations, and individuals from the state created a consortium aimed at utilizing blockchain. The Austin CityUP was created in order to advance smart city initiatives in the state.

One of the biggest blockchain events of the year is the inaugural Texas Smart Cities Summit, which is backed by the consortium. IOTA, a German blockchain foundation, announced that it will be sponsoring the main event to better explain the role and potential of blockchain.

IOTA’s latest event in Texas, held on April 29, received “outstanding” feedback, so the company decided to host a working group session and several other events during the Summit. According to the company’s official blog post, one of those events will focus on the IOTA protocol. The company said that the protocol could have potential if integrated into Smart City solutions.

IOTA has partnered with the Austin Transportation Department to work on blockchain transportation use cases. The project will work on solving the problem of interoperability between different transportation systems and will be Austin’s first step to creating a ‘Smart City.’

Jay Boisseau, the founder and CEO of Austin CityUP, said that several cities in Texas, including San Antonio, Dallas, and Houston, have started with smart city efforts. He explained:

“Smart city approaches allow us to use data, technology, and analytics to improve the quality of life in cities for all as well as the efficiency and operations of those cities.”