The crypto market industry saw its first cold winter of the year in May. 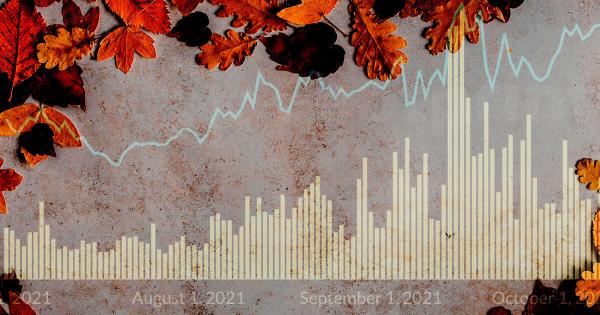 Photo by Marion Botella on Unsplash

In May, mainstream cryptocurrency prices plummeted in May and the industry’s Total Value Locked (TVL) fell below $90 billion due to the impact of national policies in several countries. After the mid-year selloff, the crypto market once again saw an even tougher policy challenge in September, with several countries stepping in to introduce various regulations.

To see the month’s most important data visualized, see this Footprint dashboard.

The price of BTC and ETH has a strong effect on all tokens except stablecoins.

From the data in the chart, it can be seen that the introduction of the relevant policies in September did not have the same impact on the prices of BTC and ETH as it did in May (BTC fell from $58,000 to $35,000 and ETH fell from $4,200 to $2,000), with BTC holding above $40,000 and ETH maintained a level above $3,000. The price of the coins did not fluctuate and the overall cryptocurrency market tended to be stable.

Compared to August, TVL in September was buoyant, topping $190 billion at the beginning of the month, a record high for the year. Although TVL declined slightly in mid and late September to varying degrees, even falling below $170 billion, the extent of the decline and the duration of the effect was far less than the impact of the policy change in May.

Older blockchains are slow to develop, but new ones are bursting on the scene

According to data provided by Footprint, the TVL and market share of TVL for Ethereum and Binance Smart Chain in September gradually were reduced by emerging blockchains.

On the other hand, emerging blockchains are gaining momentum. Solana is the main example and ranked 5th in blockchains in August with $3.33 billion TVL and was already 3rd in September with $9.79 billion (this chain had surpassed $12 billion in mid-September).

Avalanche, which has grown as a result of liquidity mining, is also doing well, ranking 6th on the public chain with $3.68 billion.

With the introduction of Korea’s policy to shut down two-thirds of cryptocurrency exchanges, the development of Terra, which is based in Korea, suffered somewhat in September, dropping it from third to fourth place overall in the blockchain rankings, with its TVL growing by just 14.1%. For comparison, Solana grew by 193.9% and Avalanche by 74.41%.

The highest TVL growth rate was recorded by Arbitrum, which is part of Layer2. With lower transaction fees and faster transaction speeds compared to Ethereum, Arbitrum has attracted an influx of funds and project owners (Curve and SushiSwap are now online). With a growth rate of 856,323.64% (TVL from a little over $100,000 to $1.3 billion), it not only came out on top of the growth rate of many blockchains, but also stood out among the many Layer2 projects.

It was followed by OKExChain, which seized the opportunity to develop an infrastructure conducive to the development of GameFi and launched the GameFi Hackathon, attracting many projects to go live on the chain and achieving a growth rate of 3,470.16% in September.

Moonriver came in third with a growth rate of 2,195.26% with $220 million in the same month. It has both the cross-chain advantages of the Polkadot ecosystem and strong compatibility with Layer1, which provides a better experience for developers and users.

As in August, DEX, lending and yield were the top three DeFi market share categories. DEX occupies first place with 30.55%, although there was a 0.34% decrease in the share compared to last month. However, with large centralized exchanges like Binance and Huobi affected by restrictive policies in certain countries, more trading volume and funds have flowed into DEXs, thereby increasing the TVL of this category by $3.61 billion.

The lending category, on the other hand, has been affected by the decline in token prices. It not only reduced the amount of funds involved in the lending business, but also increased the risk of liquidation of the originally borrowed funds, so the TVL of the lending category is down compared to August, and although it continues to maintain the second position, its percentage of market share has dropped by 2.63%.

Yield came in third with TVL of $30.34 billion representing 16.65% of the market share and the highest TVL growth of any category with an 18.74% increase compared to the previous month. The most prominent contributors were Convex Finance ($7.93 billion) and Yearn Finance ($4.69 billion).

This was a guest post brought to you by Footprint Analytics.