The debate between Bitcoin and Gold as a store of value heated up this weekend as Gold soars towards an all time high whilst Bitcoin drops below $40k. 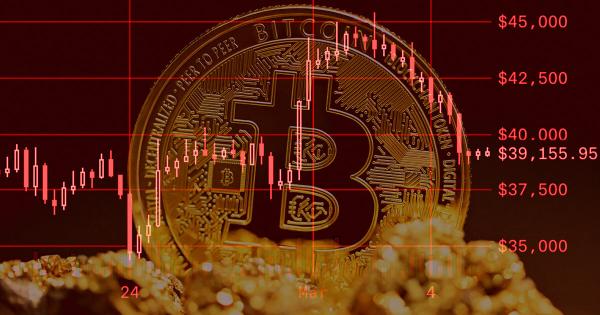 As the weekend began, Bitcoin gave up the double-digit gains from earlier in the week to drop below a critical psychological marker of $40k. Data from Santitment charts the contest between Bitcoin and old as the premier store of value as the world continues to experience uncertainty.

📉 As the week comes to a close, #Bitcoin has fallen back to $38.9k, while the #SP500 followed suit. Their correlation remains relevant to when $BTC will be able to break out again. Meanwhile, #gold climbed back to the same level as when #war news broke. https://t.co/soFXrWy0Yb pic.twitter.com/lFMn1kFYBg

By overlaying the charts, it is clear that, as the likelihood of war increased, both Bitcoin and the S&P fell, whilst gold rose by almost 4%.

The moment Russia invaded Ukraine, the trend accelerated as gold rose to its highest price since August 2020. However, supposedly the superior store of value, Bitcoin, dropped 14% intraday.

The meteoric rise of gold and the fall of Bitcoin on February 24 was not the end of the story. Gold gave up its gains almost immediately, and Bitcoin rose over 17% as Ukraine announced that it would accept Bitcoin and Ethereum donations. The cryptocurrency donations to Ukraine have been instantly liquidated to transact in fiat. The government is not accumulating cryptocurrency. Instead, it sells the moment it receives the funds into its wallet. The need to fund the war effort creates sell pressure on the market.

The rollercoaster continues this weekend. Today, gold has overtaken Bitcoin as it climbs back towards the local high of $1,974. However, gold is just 5% off its all-time high, a marker that will likely act as a strong resistance level. Meanwhile, Bitcoin is trading closer to historic support levels of $37,700 and $35,254. What will happen next will be interesting to watch but does any of this genuinely affect the argument that Bitcoin is the foremost store of value?

Which is the superior store of value?

The argument between gold and Bitcoin as a store of value has raged for years. However, whilst the growth potential of Bitcoin clearly demonstrates that it has the ability to outperform gold, it has yet to be truly tested as an actual store of value through turbulent times.

“Bitcoin is far too risky to be used as a safe haven or a store of value. Bitcoin has failed its first major test.”

Is the famous Bitcoin critic correct? Could this be a pivotal moment for Bitcoin?

#Russians who are looking to store their wealth in an asset that governments can't seize are choosing #gold over #Bitcoin. Bitcoin is far too risky to be used as a safe haven or a store of value. Bitcoin has failed its first major test. I don't think it will get a second chance!

To look at microeconomic events on individual days to make claims regarding a long-term store of value is simply misguided. We have to zoom out and look at the pace at which the blockchain space is developing. We expect to reach a global market size of $67 billion in just four years. That is a compound annual growth rate of 68.4%. Further, Bitcoin can be sent to families, friends and charitable causes from anywhere in the world.

Whilst gold has been the global value store for millennia; We can transfer Bitcoin’s value to loved ones within minutes. You can’t send physical gold to your family via your mobile phone.

This opens up the debate about what makes a store of value in 2022? If a store of value protects us from the day to day volatility of markets, then the above chart shows that neither gold nor Bitcoin passes the test. On the other hand, if a store of value is something that retains or increases over a long enough timeline, well, I don’t think Bitcoin has failed this test quite yet.

Isn’t a digital store of value the most sensible option in an ever-increasingly digital world?