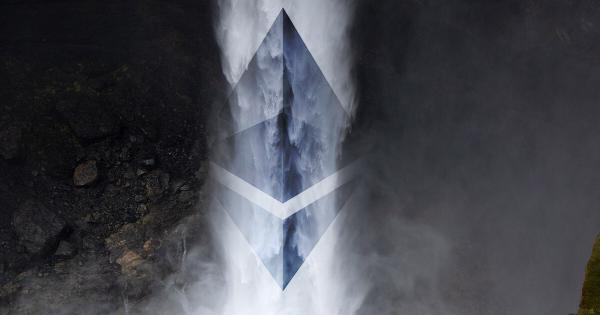 Across major cryptocurrency exchanges like BitMEX, Binance, and Coinbase, the price of Ethereum slipped from $173 to $163, recording a large drop following the daily close.

The sharp pullback of Ethereum is likely to have been triggered by a minor drop of Bitcoin, which was seemingly demonstrating signs of a trend reversal to the upside as it surged past $8,300.

The daily trading volume of both Bitcoin and Ethereum are hovering around yearly lows on BitMEX, which is known to have a major effect on the price trend of the cryptocurrency market due to its futures contracts.

Usually, when Bitcoin shows a sideways movement during an extended period, the Ethereum price tends to show a spike in volatility.

Throughout October, the price of Bitcoin has remained relatively stable in a tight range between $7,800 to $8,300, creating an ideal environment for Ethereum and other major cryptocurrencies in general to see higher volatility.

Yet, the Ethereum price struggled to show signs of a breakout to the upside and its low volume intensified the downward movement, ultimately leaving the asset vulnerable to a short term pullback.

Previously, as CryptoSlate reported, technical analysts including Dave the Wave said that the Ethereum price is likely to correct all the way down to below $150 if the bitcoin price makes its way to the low $7,000 region.

Based on the trend of the cryptocurrency market in general, which lost $50 billion in market capitalization since September, both assets are forecasted to see a build-up of sell-pressure.

“As you can see with not only Bollinger bands but also historical volatility (HV) that a major move is brewing With a slow sideways market, we’ll see descending HV that indicates a strong reaction in price action ahead and rise in volatility.”

Until Oct. 22, many traders anticipated the volatility of bitcoin to result in an upside movement. However, as Bitcoin showed rejection at a low resistance level, traders have begun to expect a deeper pullback.

Case of medium-term optimism for ETH

According to a price action trader, Ethereum is lacking signs of being overpriced or overbought and is in a neutral zone. The trader said:

“Ethereum currently shows no major signs of being overpriced, overbought or overvalued. The market is currently relatively conservative. I think ETH 2.0 is a few months away, I think we see scalability fixed & futures going live in the same month. Never a coincidence.”

As Ethereum 2.0 comes closer, investors anticipate that it would alleviate some of the pressure on the price of the asset.

The Ethereum (ETH) price has dropped by 88 percent from its record high at $1,448, showing a sluggish price trend year-to-date. 2 min read

Since achieving $13,920 at the yearly peak, the Bitcoin price is nearing a 50 percent drop and according to a technical analyst, it could mean a larger correction for Ethereum. 2 min read

At the 2019 Devcon in Japan, the Ethereum community was optimistic about the launch of the network’s second iteration, seemingly untouched by the latest controversy surrounding claims made by Ethereum’s founders about its inability to scale and grow. 2 min read