As Bitcoin bounces, are Ethereum, XRP, and Litecoin on their way to new yearly highs?

After the recent 30 percent correction that Bitcoin experienced, some altcoins are showing signs of a possible breakout while others have indicators of further decline. This technical analysis will explore whether EOS, Tezos and BitTorrent are preparing for an upswing or a nosedive.

Following the high of $8.65 on May 31 EOS’s market valuation pulled back over 35 percent, reaching $5.55 on June 27. Due to the significance of the correction, the Parabolic SAR, which is displayed as a series of dots on top and below the price of EOS and helps identify potential reversals points in the direction the price is moving, flipped on the 1-week chart signaling a change in the trend from bullish to bearish.

The probabilities for the current downward momentum increase since EOS has also moved below the 7-week moving average so a further drop down to the 50 or 30-week moving average, which are both sitting around $4.60, could be expected.

That being the case, EOS will have to break below the ascending parallel channel that developed since mid-December 2018 on the 3-day, which has the potential to accelerate the selling pressure if confirmed because of its longevity.

However, if the parallel channel continues to hold, then this cryptocurrency could be about to rebound to the middle or the top of the channel..

Conversely, a move below the recent low of $5.55 could validate what can be seen on the 1-week chart and EOS could be heading down to test the 50 or the 61.8 percent Fibonacci retracement zone.

After falling 24 percent last week, Tezos has managed to recover the value that it lost, which could have resulted from a deal worth well over a billion dollars that the team behind it recently closed with BTG Pactual, one of the largest investment banks in South America, and Dalma Capital, a Dubai-based asset management firm.

At the moment, a bullish engulfing candlestick pattern formed on the 1-week chart since this week’s candlestick is overlapping the body of the previous one. This is considered a bullish formation that is likely to reverse the bearish trend seen over the last 6 weeks.

It is worth noting that bullish engulfing patterns tend to be more effective when they are preceded by four or more red candlesticks and get confirmed once the succeeding candlestick closes above the engulfing one.

The 3-day chart adds credibility to the idea that the trend could indeed change from bearish to bullish as it seems like a spinning top candlestick pattern formed. Although this technical pattern represents indecision about the future of XTZ since neither the buyers nor the sellers were able to take control of the price action, it has the potential to reverse the trend due to the increasing buying pressure that this cryptocurrency has had lately.

On the way up, Tezos will have to first break above the $1.44 resistance level so that it can test the next level of resistance at $1.80 and possibly reach new yearly highs. It will be wise to pay attention to the $1.15 support level because a break below it could invalidate the whole bullish perspective and take XTZ down to $0.89.

Since its release at the beginning of the year, BitTorrent’s price action has been characterized by significant upswings and long consolidation periods. On the 1-month chart, it seems like the moves are part of a series of bull flags. The 212 percent surge that took place in May, for instance, appears to be the result of a bull flag breakout that had formed three months before.

Currently, there seems to be another bull pennant developing under this time frame. This is considered a continuation pattern that forms after a strong upward movement, known as the flagpole, and is preceded by a consolidation period, known as the pennant. The bull pennant predicts a 212 percent target to the upside that was determined by measuring the height of the flagpole.

The consolidation phase that BTT is currently going through can be better seen on the 3-day chart. This cryptocurrency has spent the last month mostly trading between the 38.2 and 50 percent Fibonacci retracement level.

The move above or below the 38.2 and 50 percent Fibonacci retracement zone could happen at any time since the Bollinger Bands on the 1-day chart have been contracting. This is known as the Bollinger Bands squeeze and it indicates that a period of low volatility could be about to come to an end and high volatility will likely take over.

Although this technical index does not predict in which direction the price will move, the Fibonacci retracement levels on the 3-day chart will help forecast the trend.

Even though EOS appears to have the potential to correct further down, the ascending parallel channel that has contained its price since December 2018 could hold and sustain bullish price action, similar to Tezos and BitTorrent.

If that is the case, then all of these altcoins could be about to enjoy a period of high volatility that could take them to new yearly highs. It remains to be seen whether the support levels will hold and the resistance points will break so that a new upswing begins, but patience and confirmation will be the key that allows traders to profit from the price movements that will soon hit the cryptocurrencies analyzed. 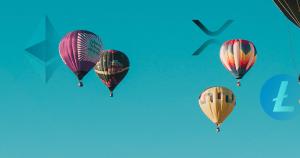 As Bitcoin bounces, are Ethereum, XRP, and Litecoin on their way to new yearly highs?