The cryptocurrency market seems to have reached an exhaustion point after the recent upswing that took Bitcoin to almost $14,000. 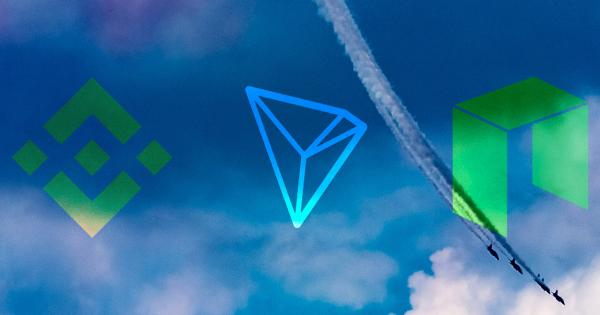 The cryptocurrency market seems to have reached an exhaustion point after the recent upswing that took Bitcoin to almost $14,000. Now, it seems like a correction could be taking place before the bullish trend continues. This technical analysis will explore if Binance Coin, TRON, and NEO are due for a further decline.

Since late December 2018, Binance Coin has been trading above the 7-week moving average invalidating all the sell signals given by the TD Sequential Indicator in the 1-week chart. This is can be seen as a clear sign of the strength of the bullish trend.

Last week, a new sell signal was given by the TD sequential indicator predicting a 1 to 4 weeks correction before the continuation of the bullish trend. Due to the strong support that the 7-week moving average poses, a break below it could confirm that a retrace is underway that could take BNB to test the 30 or 50-week moving average.

Nonetheless, the bearish signal will be invalidated if the 7-week moving average continues to hold and Binance Coin manages to move above the recent high of $39.6.

The last time the 12-three-day EMA moved below the 26-three-day EMA was at the beginning of May, which resulted in a 22 percent retrace that lasted 5 days.

In addition, a bearish divergence can be spotted on the 1-day chart since the price of Binance Coin has been reaching higher highs while the relative strength index (RSI) has been making lower lows.

Although this bearish formation does not provide a precise selling point, combined with the different technical indexes previously described, it could be signaling that the momentum that this cryptocurrency has gone through could soon change in direction from bullish to bearish.

TRON’s market behavior appears consistent when analyzed from a larger timeframe, such as a 1-week chart. Under this timeframe, it can be seen how since the beginning of the year TRX was trading within a $0.006 range between $0.023 and $0.029 until it finally broke out around mid-May.

The move down to the $0.029 support level could also be confirmed by the double top formation seen in the 3-day chart. This is an extremely bearish reversal pattern that developed after TRX reached the $0.038 resistance level two consecutive times. A move below $0.031 will confirm the pullback to the 50-three day moving average that is sitting around $0.029.

However, if TRON gets back above the 7-three-day moving average it could be a sign that it will break the $0.038 resistance level and try to test the next hurdle point at $0.049.

A series of support and resistance levels based on historical data can be drawn on NEO’s 1-week chart to help determine the different price points that will act as barriers, preventing its price from getting pushed up or down.

Recently, the upswing that NEO had was rejected by the $20 resistance level. Although this level of resistance has been tested twice over the last two weeks, it has been able to hold and stop this cryptocurrency from reaching new yearly highs.

Since support and resistance levels become weaker when they are tested multiple times, a break above $20 could happen the next time NEO rises, which could take it to reach the next level of resistance at $31.

It is worth noting that due to the high concentration of supply seen around $20, a pullback to the $13 support point could be expected before NEO tries to reach higher highs.

The pullback could materialize since NEO just reached the top of the ascending parallel channel where its price action has been contained since the beginning of December 2018 based on the 3-day chart.

Even though this cryptocurrency seems to be bouncing off the middle line of the channel which is a bullish sign, the buying pressure must increase or it will indeed fall to the bottom of the channel.

The 1-day chart adds credibility to the idea that a correction to around $13 could be possible as it seems like a spinning top candlestick pattern had developed. This candlestick formation could be signaling a reversal since it was succeeded by a red candlestick.

The only way to consider that the bullish trend will continue is if NEO moves above the 7-day moving average and the following candlestick opens above it.

The entire cryptocurrency market has gone through a major rally since late 2018. Binance Coin, for instance, has gone up 861 percent while TRON and NEO around 280 percent. Up to now, there has not been any significant correction since most of the bearish signals given by different technical indexes had been invalidated.

Now, the market once again is giving signs that a retrace could be underway and this can be seen across all the cryptocurrencies previously analyzed. Although it seems like the retrace is taking place at the moment and a further drop could be expected, it will be wise to wait for confirmation before taking a stance on the state of the market.