EOS, LINK, and XTZ are signaling a significant price movement 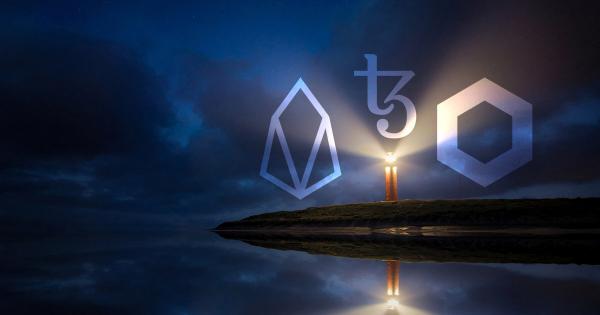 Several altcoins are starting to move exponentially despite Michael Novogratz’s claim that the “market is getting smarter.” VeChain, for instance, has been on a rampage surging nearly 185 percent in the last 22 days. As the volatility spreads through other cryptocurrencies, the following technical analysis will explore whether EOS, Chainlink, and Tezos are bound for a substantial price movement.

Based on its 3-day chart, EOS appears to have formed a double bottom pattern. This is also known as a “W” pattern that was created around the 88.2 percent Fibonacci retracement level. This technical pattern developed as EOS plunged to $2.40 on Sept. 24, rose to $3.37 on Oct. 9, and pulled back to $2.53 once again on Oct. 23.

The double bottom estimates a change in trend and momentum from bearish to bullish. However, the bullish impulse that EOS saw in late October seems to have faded. And, this could be a reason to believe that the double bottom may have been invalidated.

Now, this crypto is consolidating within a trading range on its 12-hour chart. The lower and upper Bollinger bands, sitting at $3.35 and $3.62, respectively, define this range. Trading within these support and resistance levels poses high-risk exposure. This is a result of the inability to determine in which direction the trend will result.

As the Bollinger Bands squeeze on EOS’s 12-hour chart, the odds for a sharp breakout increase. Thus, it will be wiser to wait for a clear move outside of this range before entering a trade.

On the other hand, a spike in volume that gets EOS to move above the $3.62 resistance level could validate the double bottom seen on the 3-day chart. Such a bullish move could allow it to rise to the following levels of resistance at $4.10 and $4.50.

Since mid-September, Chainlink went through a bullish impulse that took its price up nearly 120 percent. This cryptocurrency went from trading at a low of $1.44 on Sept. 13 to a high of $3.16 on Nov. 14.

At the moment, LINK appears to be back-testing the breakout point of an ascending triangle. This technical pattern developed on the 1-day chart due to Chainlink’s price action.  A horizontal line formed along with the swing highs and a rising trendline along with the swing lows.

By measuring the height of the triangle, at its thickest point, this pattern presents a target of 26 percent to the upside. If LINK can bounce off the $2.84 support level, it could surge to hit a target of $3.60.

Based on its 12-hour chart, it seems like the 38.2 percent Fibonacci retracement level would have to hold so that LINK can reach higher highs. Otherwise, this cryptocurrency could plummet to the next levels of support around $2.66 and $2.51.

Therefore, the strength of the 38.2 percent Fibonacci retracement level would determine whether Chainlink is bound for a further correction or a bullish impulse.

At the moment, this crypto is trading at the top of the descending parallel channel. And, it is threatening to break out of it in an upward direction. A spike in the buying orders behind Tezos could allow it to move out of this consolidation phase. Such a bullish impulse would add credibility to the idea that the channel is part of a bull flag.

This is considered a continuation pattern that developed after Tezos rose to nearly $2, known as the flagpole. And, was succeeded by the current consolidation period, known as the flag, which could result in a breakout in the same direction of the previous trend.

By measuring the height of the flagpole, this technical formation estimates a 78 percent target to the upside. If validated, XTZ could be preparing to skyrocket and hit a target of $2.17.

Nevertheless, failing to break out of the descending parallel channel could signal a pullback to the middle or the bottom of the channel. Due to the opposing views presented on XTZ’s 1-day chart, its 12-hour chart could provide a better perspective.

Under this timeframe, Tezos is trading between the 50 and 38.2 percent Fibonacci retracement levels while the Bollinger bands are squeezing. Squeezes are indicative of low price action, but they usually result in a period of high volatility.

Closing above the 38.2 percent Fibonacci retracement level would imply that XTZ is breaking out and could be aiming for a 78 percent upswing. This would validate the bull flag seen on its 1-day chart.

At the moment, it seems like all the cryptocurrencies previously analyzed are sitting at pivotal points on their trends. Although EOS, LINK, and XTZ have formed different bullish patterns on the higher timeframes, the lack of volume seen lately could invalidate the optimistic outlooks. This is the reason why it seems to be wiser to wait for either the resistance or support levels to break before entering any trade.

Block.one, an open-source software publisher, announced that it will start voting for EOSIO’s public blockchain upgrades.