The price of Dogecoin has surged past 30% following Elon Musk's announcement of Tesla accepting payments in Dogecoin. 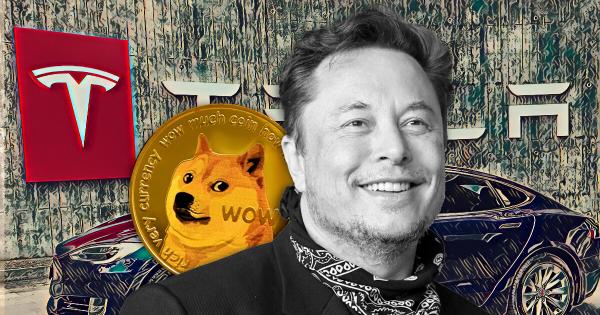 Photo by Beat Jau on Unsplash

Elon Musk, CEO of Tesla Motors, tweeted in support of Dogecoin and declared that Tesla will now accept Dogecoin as payment for its merchandise. The tweet prompted the token prices to soar past 30% within minutes after the announcement was made online.

The Tesla CEO has been a long supporter of Dogecoin, a Japanese Shiba Inu-based currency that was created as a joke in 2013.

Tesla to accept payments in Dogecoin

Musk, who was recently declared as Time Magazine’s person of the year, has always been a dedicated dogecoin supporter. The Tesla chief had earlier extended his support to Dogecoin when the original creators of the meme currency had abandoned the said venture in 2015.

Tesla is not the only company that has openly declared its support to Dogecoin. The Dallas Mavericks, a basketball team owned by crypto investor Mark Cuban had earlier backed Dogecoin by accepting it as payment for its merch and tickets.

The point about DOGE that people miss is that DOGE's imperfections and simplicity are it's greatest strengths. You can only use it to do 2 things: Spend It or HODL It. Both are easy to understand. And it's cheap to buy. Which makes it a community anyone can join and enjoy.

While Tesla may be the biggest corporate holder of Bitcoin, Musk has always shown interest in Dogecoin and has tweeted multiple times in support of the meme currency. In May, Musk had tweeted that he was working with Dogecoin developers to improve its system efficiency.

“Fundamentally, Bitcoin is not a good substitute for transactional currency. Even though it was created as a silly joke, Dogecoin is better suited for transactions,” Musk said in an interview with Time Magazine

Following Musk’s tweet to accept payments in Dogecoin, the price of the token has surged past 30%, and as per CryptoSlate, is currently trading at $0.20.