The telecom industry is dominated by a few players who leave little room for real innovation. 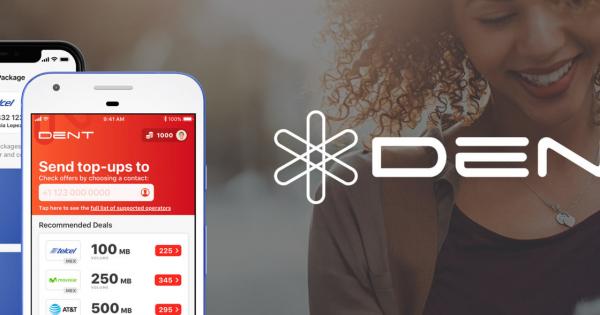 The telecom industry is dominated by a few players who leave little room for real innovation. DENT is offering users a mobile-data marketplace that has the potential to change the way in which people utilize and manage their extra monthly data.

While the associated currency, DENT coin, has been down 9.4% in the past week, this technology still holds a lot of promise for the future. If adopted en masse, DENT will be able to liberate mobile data and disrupt the Telco industry in a big way.

DENT is essentially a blockchain-based marketplace that enables users to trade their mobile data in a streamlined and straightforward manner. Their technology is a first of its kind and has the potential to make the telecom industry much more efficient and cost-effective.

DENT allows users to sell their extra mobile data, which may have been left over at the end of one month to someone else via the use of an all-in-one app.

Lastly, all internal transactions are facilitated through the use of Dent coins— which are given to users in exchange for their mobile data.

DENT makes use of a sharing model, which allows users to buy, sell, or donate their mobile-data easily. The platform also serves as a horizontal trade market wherein users from all over the globe can directly initiate data-exchanges with one another.

There is a significant market for this service. In comments last June, DENT co-founder, Mikko Linnamäki, notes,

“Dent builds a community of telco customers like a ‘union’ to leverage the collective buying power to drive change. For a telco, each customer is highly valuable…Combining just 2 million customers represents $920 million.”

Another critical aspect of this platform is its ability to eliminate data roaming costs that are commonly incurred by smartphone users. Through the use of a local data break-out protocol, this service aims to route all of its traffic via the internet, instead of using a home-telco provider.

It is also important to mention that smart contracts govern all internal mobile data transfers and transactions. These contracts deliver service providers with a proven channel to facilitate trades while making all of one’s actions viewable through the use of an immutable ledger system.

Lastly, DENT allows automated data purchases, thereby enabling consumers and IoT devices to function more smoothly. Not only that, but it also allows users to get the best price from the most suitable operator in their region. Operators no longer have to create a siloed platform but instead can use the DENT network to carry out their transactions.

DENT’s Android app officially launched at the end of February.

DENT Wireless Ltd is the parent company behind this project. They are based in Hong Kong and were founded back in 2014.

The core team consists of Tero Katajainen who is the Founder and CEO of this venture. Katajainen has been in the digital domain for over 20 years and holds a Masters degree in Electrical Engg from the University of Tampere, Finland.

Similarly, Mikko Linnamäki is the Co-Founder of this project. As per his official LinkedIn profile, Mikko describes himself as a “serial entrepreneur” who has been investing in internet startups since the early nineties. He is also the co-founder of DoveCot— one of the world’s most used IMAP Servers with a world market share of 72% and over 4 million installations.

Lastly, Andreas Vollmer is the team’s core App Developer. He too has been in the technological sphere for over a decade now and is one of the people behind TDSoftware—  one of Germany’s leading mobile app development companies.

Where to Buy DENT

The currency is currently extremely popular in the Korean cryptocurrency market, with the DENT/BTC pair seeing a significant amount of activity on South Korean exchange Coinrail.

The future of DENT seems promising since this cryptocurrency is looking to democratize the process in which people all across the globe manage mobile-data.

The platform can be especially useful in lesser-developed nations where digital resources such as mobile-data can be a bit more difficult to obtain.

With the DENT Android and iOS apps already in the market, the company is now examining the possibility of topping-up pre-paid SIM cards using native tokens. Additionally, the roadmap has also outlined the release of novel DENT 2.0 dApps by Q4 2018.

For more information on Genesis Vision, including its market cap, price, and founders, please see our DENT coin profile or watch the video below.