The state of Oklahoma has embarked on an ambitious plan to attract miners. 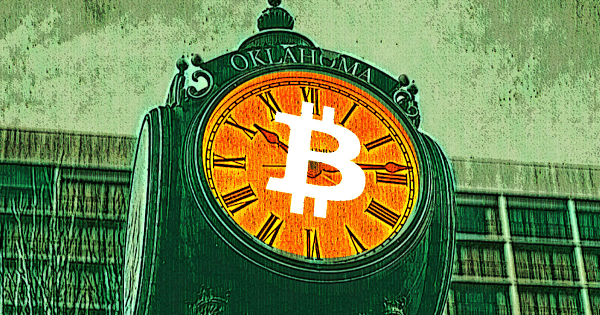 Oklahoma lawmakers are in the final stages of introducing legislation that would make the state the new cryptocurrency mining hub in the U.S.

Called the “Commercial Digital Asset Mining Act of 2022,” the proposed bill would see the state provide various incentives to businesses in “innovative technological industries” that set up shop in Oklahoma.

In March, the Senate got the first glimpse of a new bill that has the potential to change the landscape of cryptocurrency mining in the U.S.

Republican Senator John Montgomery presented his “Commercial Digital Asset Mining Act of 2022,” saying that the mining industry was growing and won’t be going away anytime soon. This, he told the Senate, is why Oklahoma wants to draw as many of those businesses across their state lines and have them set up roots there.

This would be done through a series of incentives that would remove a significant amount of tax burden from mining companies. And while Sen. Montgomery said that his working group is yet to set a cap on those incentives, he said they’d be worth no more than $5 million.

While those supporting the bill believe that this would be enough to put Oklahoma on the map for many large miners looking to relocate, some senators questioned the effectiveness of the incentives, fearing that they wouldn’t benefit state and local services and programs.

“With a growing industry it’s exciting, but we’ve got to make sure that we don’t miss the opportunity to invest back into our state from that growth industry,” Senator Julia Kirt said during the debate last month.

However, there is already evidence that Montgomery’s crypto-welcoming policy could have significant benefits for the state.

Earlier in March, German tech company Northern Data announced that it will establish its North American headquarters in Pryor, Oklahoma. The $270 million investment will see the data company establish a 100-acre operation at the MidAmerica Industrial Park and hire more than 150 employees in the coming months.

The company will initially set up a cryptocurrency mining operation but will expand into other “innovative technological industries,” including data centers, cloud services, and research labs dedicated to data processing. The campus is expected to become operational within 24 months and will add more employees as it expands in the future.

To power the huge operation, Northern Data will purchase up to 250 megawatts of power from the Grand River Dam Authority, the state-owned utility that provides low-cost, reliable energy to municipalities and corporate customers.

Having a company the size of Northern Data set up roots in Oklahoma will likely be enough to push other companies to follow suit, regardless of the tax incentives.

The incentives will provide companies with a credit against the tax imposed by the state for investing in a mining facility or increasing the number of full-time employees in an existing mining operation.

To qualify for a credit against tax, a company must invest at least $40 million over three years in a “qualified depreciable property.”

Mongtomery’s legislation was cleared by the Oklahoma Senate on March 22nd and moved to the legislature’s lower chamber on March 23rd. The Senate published its standing committee report on the bill, suggesting passing the law as amended earlier that month, and is expected to finally amend the bill in the coming weeks.