When launched, the crypto hub is expected to drive tokenization of the Central African Republic mineral resources and pave way for economic growth. 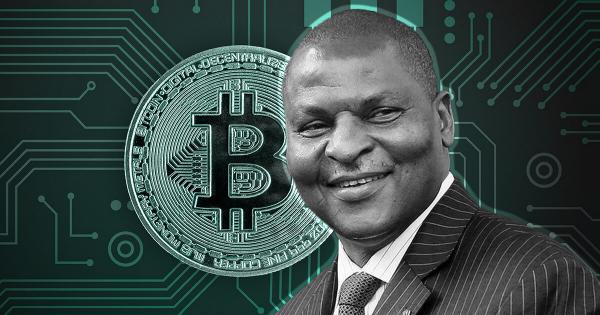 With #Bitcoin as #legaltender & inspiration, our country opens a new chapter in its inspiring journey towards a brighter future via #blockchain #tech.
Everyone is welcome to witness the Sango Genesis Event that will be broadcast on the 3rd of July, on https://t.co/LIQiKGhcBS. pic.twitter.com/7u6knv5f6w

The country last year became the second in the world and the first in Africa to adopt Bitcoin as a legal tender.

Despite the massive sell-offs recorded in recent times, the President has continued to show his support for Bitcoin.

In an official statement released with the tweet, the President stated that Sango would pave the way for the tokenization of the country’s resources and improve the economy.

As per details on the project’s website, investors would be able to finance mining projects and invest in the country’s resources.

Likewise, mining companies can issue digital tokens backed by assets such as gold or other materials to raise money and run their operations.

The project’s launch will also see the creation of a National Agency for Regulation of Electronic Transactions and a national digital bank. The government plans to introduce tax incentives on crypto transactions as well.

However, the project’s website has drawn criticism, with a user calling the information on it about bitcoin misguided.

The President first revealed plans for the crypto hub in May 2022. In the tweet, he referred to the project as an innovation that “has the potential to reshape CAR’s financial system.”

Does Sango hold all the answers?

Despite its significant mineral resources deposit and small population, CAR is one of the poorest countries in the world. This poverty results from a lack of infrastructure, slow-paced development, and weak institutions.

The ongoing civil war has also caused a decline in international interest in the country’s resources. Making its GDP decline over the year to $2.3 billion after peaking at $2.5 billion in 2012.

In a June 2 tweet, CAR’s President stated that the next line of action is the democratization and tokenization of resources. From all indications, the government plans to drive interest in the country’s mineral resources and create a revenue source through the hub.

The country has come under criticism for adopting Bitcoin as a legal tender. However, the President has argued that the adoption could drive growth and development in the country.