In a surprise AMA session on October 21, Charles Hoskinson, the CEO of IOHK, discussed the progress Cardano made in the past weeks, as well as the future of Cardano and ADA. 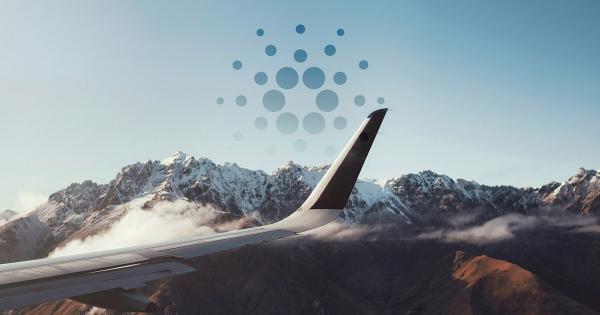 In a surprise AMA session on Oct. 21, Charles Hoskinson, the CEO of IOHK, discussed the progress Cardano made in the past weeks, as well as the future of Cardano and ADA. Hoskinson answered questions asked by the Cardano community, where he revealed that the company has been working on several pilot projects that will bring Cardano to the masses.

After celebrating its second birthday earlier this month, Cardano seems to have picked up the pace. The ambitious research-oriented blockchain has been known for slow development but has exceeded the expectations of its community with a slew of updates and new launches in the past few weeks.

In the AMA session on YouTube, Charles Hoskinson, the CEO of IOHK, the company behind Cardano, updated the community about Cardano’s current state and offered a glimpse into its very ambitious future.

Hoskinson began the AMA with a recap of all the things Cardano accomplished recently, beginning with its newly announced partnership with New Balance. The project, called NB Realchain, is the first mass-market product on the Cardano network and a great example of blockchain in action, he said.

The project, which took 8 months to complete, managed to raise a conversation on how the authentication of luxury goods is going to be handled in the long-term, he continued, adding that set a great precedent on how to solve issues that arise with the secondary market for luxury goods.

Jörmungander, the node that implements the protocol that runs Cardano, has gone through multiple releases last week and saw a major upgrade to the testnet. Hoskinson said that it marked the beginning of a broadscale stress testing of the Shelley testnet, which turned out to be quite a success in the Cardano community.

Hoskinson said that there were instances where there were over 2800 people on the testnet, which only seems to have strengthened the company’s belief that an incentivized testnet for Shelley was on schedule for November.

However, what the company is still not sure about is how to do the snapshots of the network before the testnet launches. Earlier this month, Cardano’s senior product manager David Esser explained that at a certain point before the launch, a snapshot of the entire Cardano blockchain will be taken in order to determine the number of users and the amount of ADA on it. This will be done to create a testnet that is an exact replica of the Cardano blockchain.

Hoskinson explained that they were still torn on whether to have one or two snapshots. Doing only one snapshot of the network would be much faster and more efficient, but adding a second snapshot a couple of weeks later would mean that the community got a “trial run” before they enter the testnet.

The company is also working on restoration options for the Daedalus wallet, as well as designing and deploying a stake pool dashboard. An explorer for the incentivized testnet should also see the light of day in the following weeks, Hoskinson said, adding that Cardano has put out more software this month than ever before.

Exciting new projects on the way

Cardano looking to spread to less-developed markets is old news, but Hoskinson said that the company has seen significant updates when it comes to its developments in Africa. While he remained mysterious about the details, Hoskinson said that a pilot deal was in the works. A feasibility study that will determine the potential of the project has already begun and should be completed by the end of the year.

The company has established a partnership with a local entity, which could make it possible to launch a currency pilot by June 2020, Hoskinson told his viewers. Cardano’s spread to Africa is part of its broad effort to offer tokenization of fiat currencies, which has been recognized by major investors. Hoskinson said that part of the cost of realizing such a project could be covered by the World Bank.

Investing in Cardano is something the company hopes can also happen outside of Africa. When asked whether the company planned on making its product more attractive for Wall Street and Silicon Valley investors, Hoskinson said that “infrastructure” was being created to facilitate more investments. He believes the best way to do this is to create an investment banking product on Cardano, or even build a blockchain fund of ADA.

The Cardano community bombarded Hoskinson with questions regarding other future projects, but he did not provide any details on the projects. When asked when the Cardano debit card would launch, Hoskinson said that the card was part of the work of the Cardano Foundation and that an official announcement should come soon.

He also said that a detailed announcement about Cardano’s involvement with the University of Wyoming will be published shortly. A pilot project in Mongolia is also in the works, Hoskinson added.

He was equally reserved about answering the question of what his favorite Cardano dApp was, saying only that it involves authentication and anti-counterfeiting.

In the meantime, Cardano will continue to work closely with regulators, Hoskinson said.

Slow and steady wins the race, but major strides being made

While often criticized for its slow development, especially when compared with some of the projects that exploded quickly such as Tron, Hoskinson seems to believe that slow and steady is the way to go. He said that the ultimate goal was for Cardano’s ADA to one day replace Bitcoin, a goal that is attainable, but still far away.

Hoskinson believes that ADA could become one of the first cryptocurrencies to achieve a $1 trillion market cap. The company’s ultimate goal is for ADA to become its own economy, and a trillion-dollar market cap would require millions of users using tens of thousands of app. This, he told his viewers, could be attainable.

The strides IOHK made with Cardano in the past few months were a result of a combination of factors, the main two being the programming languages used to build the blockchain. Hoskinson said that doing things the Haskell way made the development slow and methodical, while working in Rust enabled it to move in a fast, agile way, not unlike how Silicon Valley companies grow.

Focusing on research has also paid off—the Cardano research team submitted 18 papers in September and October alone and more are on the way.

All of those research papers will help Cardano launch more products as it did with New Balance. When asked when less tech-savvy people will be able to use the complex Cardano, Hoskinson said that NB Realchain was a perfect example of how blockchain can be implemented and used by a large number of people without them ever knowing they’re using a blockchain.

But, despite having one of the few functional blockchain products, Cardano is up against tough competition. Hoskinson said that Algorand was its main challenger, but Starkware was also high up on the list of its competitors. He didn’t seem too thrilled to talk about Ethereum, which he co-founded, saying that apart from occasional technical reports he gets, he has no connections to its development.  He told the viewers:

“A lion doesn’t concern itself with the opinion of sheep.”

When it came to the company’s future plans, Hoskinson said that IOHK’s ending contract with Cardano doesn’t worry him. Once the contract expires, the company will submit what Hoskinson calls “a mother of all closing reports” and submit it to the community in the form of a funding ballot.

If the community and IOHK manage to agree on terms, IOHK will continue working on the project. If not, it will keep submitting relevant research to aid the development of Cardano. A significant part of that research will focus on finding ways to make Cardano quantum-resistant. Hoskinson said that while quantum computers are a “bogeyman” in the crypto world, they aren’t a problem that needs to be dealt with for the next 10 to 20 years. He concluded:

“By the time it’s a threat, we will have a solution and Cardano will be secure.”

The current state of the crypto industry was also addressed when Hoskinson was asked why ADA had such a low market cap. While acknowledging that it was a “horrible time” in the crypto space, he remained adamant that crypto is here to stay.

Cardano moves towards decentralization as its price consolidates