The crypto market entered the last month of the year scarred by significant losses. 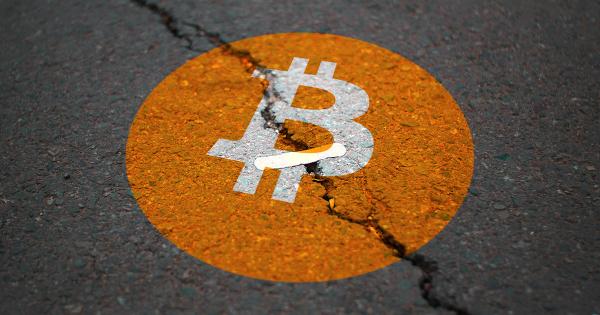 Photo by Luis Villasmil on Unsplash

The extreme volatility the crypto industry experienced at the end of November was further exacerbated by massive liquidations in the futures market.

According to data from Glassnode, Bitcoin plummetted from its high of $59,000 to a low of $45,000 during the weekend, putting the market down by as much as 35% from the all-time highs set at the beginning of November.

After rising to just shy of $60,000, Bitcoin took a major hit last week when the market went deep into the red. The huge shakedown wasn’t contained to the crypto industry—the global financial market took a significant hit as well, with stock prices across exchanges seeing major drops.

A driving force for the rest of the crypto market, Bitcoin plummetted to a low of $45,000 on Sunday after rallying to a high of $59,000. The 35% decrease from the ATH set at the beginning of November dragged the rest of the market down, with almost every cryptocurrency showing significant losses.

The extreme volatility was caused by panic selling as traders raced to front-run the market. Last week, Federal Reserve Chairman Jerome Powell indicated that the central bank is considering reducing the pace of monthly bond buys, a move that would enable the Fed to raise interest rates as early as next spring.

This added fuel to the fire ignited by the emergent strain of the coronavirus. The sell-off caused by the rumors was further exacerbated by massive liquidations in the futures market. According to data from Glassnode, the sustained peak levels of open interest in the Bitcoin futures market created a solid foundation for a high volatility event. As the weakness in legacy markets pushed all assets underwater, the selling pressure on Bitcoin triggered a cascade of long liquidations.

“While the cryptocurrency market is known for its volatility and potential price spikes, the correction experienced this weekend appeared to shake confidence in the market as a whole,” Walid Koudmani, a market analyst at financial brokerage XTB, told CryptoSlate.

The open interest in Bitcoin futures saw $5.4 billion in contracts flushed away, wiping out 24.5% of total value from the space.

“Today the situation appears quite uncertain as BTC trades around $47,000 and as investors focus on headlines to ascertain the severity of the matter,” Koudmani added.

However, not everything is as bleak as the charts suggest. On-chain data seems to corroborate predictions made by analysts, most of which believe that a floor has been set for the losses. Koudmani noted that despite Bitcoin’s dominance being at its lowest in the past several months, it’s not necessarily a sign of a bear market.

“One thing to note is that although prices dropped across the board, a look at the ETH/BTC chart indicates that a significant part of the money flowed into Ethereum rather than into the main crypto.”

It’s also worth noting that most of the tokens dumped at spot markets belonged to new investors. Glassnode reported that 97% of Bitcoin’s supply older than 3 months has remained unspent since the recent all-time high and pullback.

“Generally speaking, this demonstrates high conviction, despite extreme volatility and losses. Quite the contrast to this week’s price action,” the company concluded in its latest report.