Binance has delivered the latest installment in the chronicles of its much-anticipated Decentralized Exchange (DEX), having revealed a “sneak preview” video and coordinated press release detailing a glimpse at the platform’s user interface, web wallet, and blockchain explorer. 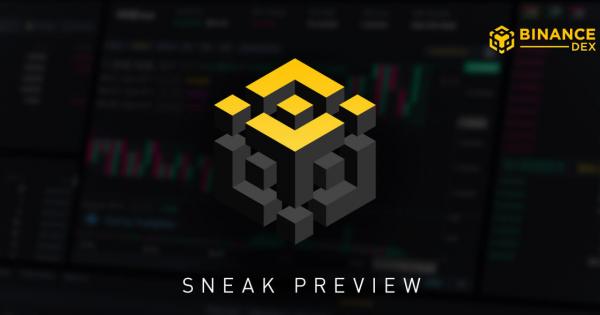 Binance has delivered the latest installment in the chronicles of its much-anticipated Decentralized Exchange (DEX), having revealed a “sneak preview” video and coordinated press release detailing a glimpse at the platform’s user interface, web wallet, and blockchain explorer.

Released Dec. 5 amidst a blistering market nosedive, the announcements may be the last before the testnet launch of the decentralized offshoot of the world’s largest cryptocurrency exchange by daily volume.

One of the exchange’s development team apparently took a “very brief break from coding” to compile the video, sharing a glimpse at an interface surely remarkably familiar to current Binance users, and showcasing the platform’s promised “low latency” with an instantly-filled limit order buy.

Binance Chain will also have its own block explorer permitting users to track transactions, confirmation times, user addresses, and all the usual bells and whistles expected of a native chain.

In line with the industry-wide push for non-custodial trading, the platform will feature a wallet purportedly allowing users to store any asset and transact in a decentralized fashion, logging in and executing trades directly from their balance using Binance coin (BNB) as the native gas.

According to a press release by the market-leading exchange, funds will likely be secured with Trust Wallet—a server-free wallet dApp that stores private keys solely on a user’s device—acquired by Binance in July.

Trade Against the Grain

Where few of these features would come as groundbreakers, Binance blew the lid on several tidbits which may beat other decentralized exchanges to the punch on functionality, including a token issuance function, and the unprecedented ability for users to elect new trading pairs.

According to the press release, Binance DEX will permit users to:

‘Binancians’ have been drip-fed a series of teasers since the project’s announcement in March, however the latest would seem to place the DEX as breathing down the neck of its scheduled Q1 2019 launch.