The GameStonk hit the $450 price level yesterday before corrupt firms clamped down on its trading. 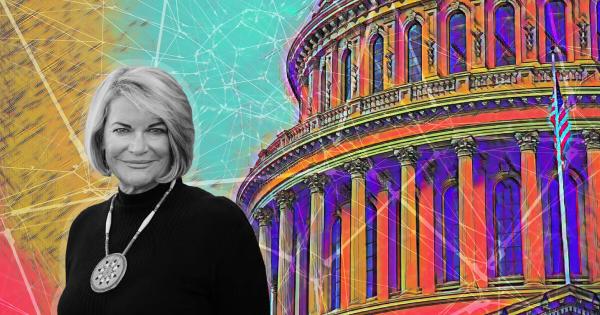 The GameStonk hit the $450 price level yesterday before corrupt firms clamped down on its trading. But one senator says the whole thing could have been avoided if blockchain technology was implemented.

Senator Cynthia Lummis said yesterday that blockchain technology could help fix the rampant stock manipulation that occurs in financial markets, as per a tweet.

Lummis represents the people of Wyoming in the United States Senate and has been in office since this month. She was earlier the representative at large for the district of Wyoming from 2009.

She’s now championing for blockchain technology to fight corruption. In a tweet yesterday, Lummis said, “What happened with #GameStop this week is basically unprecedented. At one point, there were 38% MORE outstanding claims to GameStop stock than stock that actually existed! Good news: we can fix this with #blockchain”

Lummis went on to say that if shares of the stock were issued on a blockchain,  the MainStreet (read: retail) investors would own their own shares of stock (currently, just a claim on your broker). The tech would also make Wall Street more efficient while regulators like the US SEC could more accurately monitor the market, she added.

If shares of stock were issued on a #blockchain, #MainStreet investors would own their own shares of stock (currently, just a claim on your broker), #WallStreet can be more efficient and regulators like @SEC_News can more accurately monitor the market.

The statements came as retail trading app Robinhood stopped the purchase of GameStop (GME) shares yesterday, as retail traders — a majority from Reddit forum WallStreetBets — drove prices up to the $450 mark.

That price surge is said to have caused implications for firms like Robinhood and other “shorters,” — or firms that bet against the rising prices for GME for a profit.

But in a seeming case of corruption, Robinhood blocked the purchase of shares and drove prices momentarily down, a move that was later slammed by politicians, business leaders, and much of the retail trading industry.

These included politicians like US Representative of New York Alexandria Ocasio-Cortez, who said the public deserved to know about Robinhood’s decision to “block retail investors from purchasing stock while hedge funds are freely able to trade the stock as they see fit.”

We now need to know more about @RobinhoodApp’s decision to block retail investors from purchasing stock while hedge funds are freely able to trade the stock as they see fit.

As a member of the Financial Services Cmte, I’d support a hearing if necessary. https://t.co/4Qyrolgzyt

Meanwhile, the furor has led many to state on Twitter that the general public was likely to pay more attention to the crypto space now that the corruption and lack of support for the small guy were being gradually exposed.

But here’s to hoping that they come for adoption, not for the pumps.