With other networks actively working on facilitating faster transactions and lower gas fees, it will be interesting to observe how BSC will evolve and strengthen its position in the market. 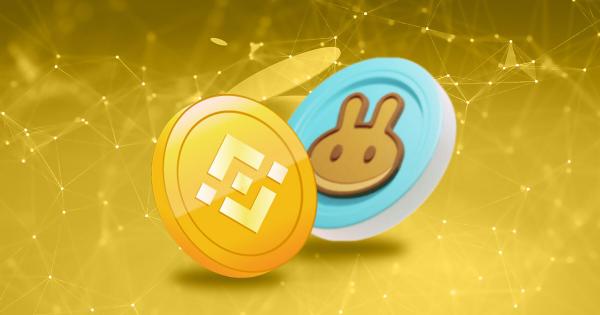 The blockchain analytics platform Nansen has analyzed user activity on Binance Smart Chain (BSC) and revealed the most interesting trends in a new research report.

Created as a “parallel blockchain” to Binance Chain, BSC delivered programmability and smart contracts to developers interested in launching their tokens on the network, ushering hundreds of projects, such as PancakeSwap (CAKE), Venus (XVS), Auto (AUTO) and Beefy Finance (BIFI), to name a few.

The competitive advantage of BSC

While compatible with the Ethereum Virtual Machine (EVM), the blockchain that “was created as a scalable infrastructure to handle a large number of low-cost DeFi transactions without compromising speed,” reaps the support from the vast variety of Ethereum tools and decentralized applications (dApps).

As the report pointed out, “one competitive advantage of BSC over Ethereum (ETH) is that the gas price, or rather the cost necessary to perform a transaction on the network, is significantly cheaper.” 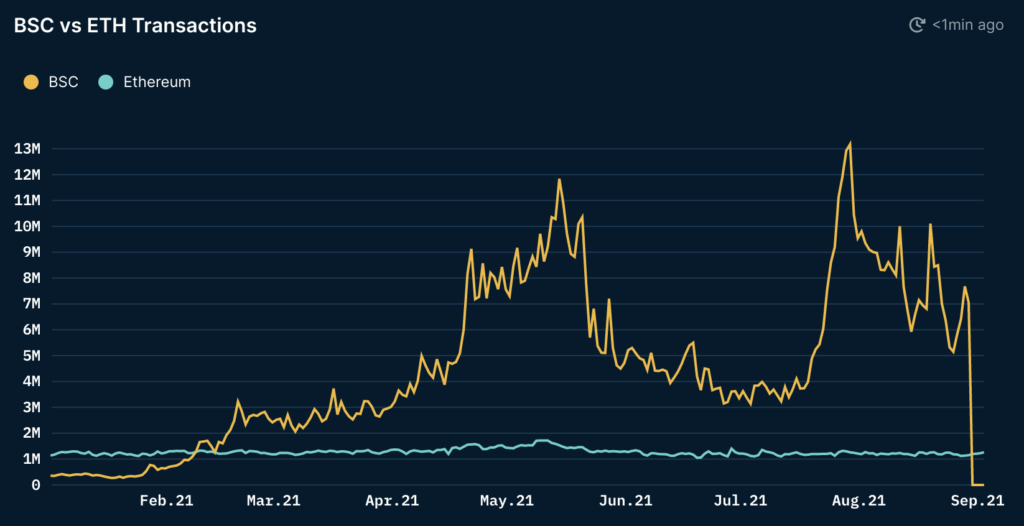 According to the report, Tether (USDT) is being transacted almost twice as much as USD Coin (USDC) and DAI combined in terms of volume and dominates stablecoin circulation by a huge margin on the Ethereum network.

“One would probably guess that Binance USD (BUSD), the 1:1 USD-backed stable coin issued by Binance would completely wipe the floor in terms of daily transactional value and daily unique active users,” according to the report, which revealed that this was the case only during the early phases of BSC.

“When the Binance Bridge was released which supported ERC-20 and TRC-20 cross chain transfers, USDT was introduced to the system. People could seamlessly convert an ERC-20 USDT token on ETH to a BEP-20 USDT token on the BSC, causing USDT to gain traction,” as further explained by the Nansen analyst team.

“The daily unique active users graph paints a similar picture for BUSD and USDT,” read the report, revealing that USDT managed to outperform BUSD on several occasions, while DAI lagged as a distant third, with 40 to 50 times less users. 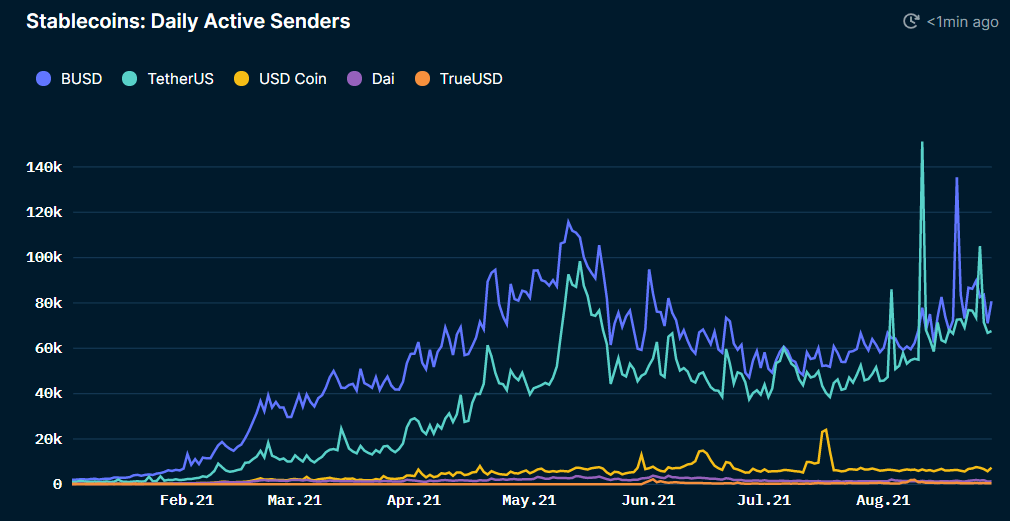 “This is possibly attributed to the native-coin advantage that BUSD possesses,” according to the report, which pointed out that most pools on the BSC network consist of token pairs with BUSD and BNB.

The daily transaction volume of stablecoins peaked in mid-late April and dramatically dropped in volume after. 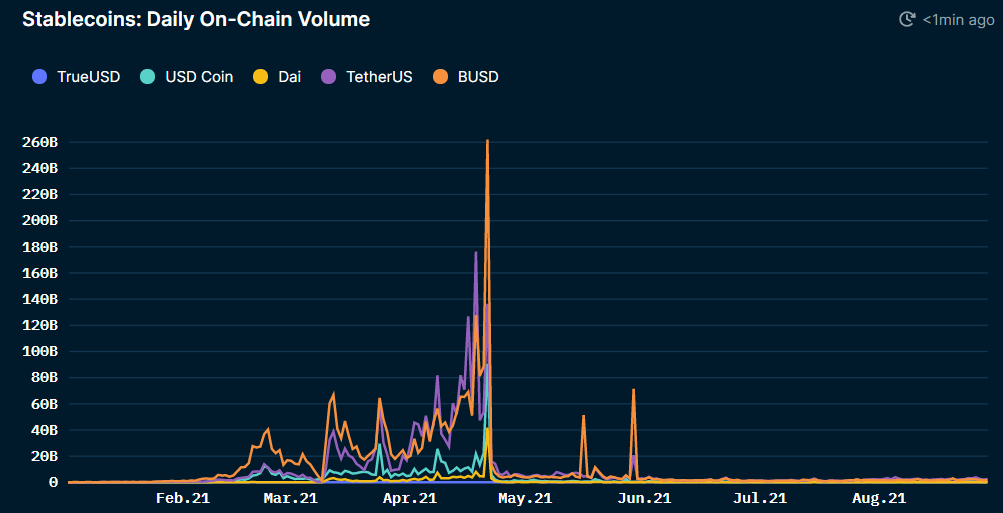 As clarified in the report, “this period definitely rings a bell to many crypto maniacs as Bitcoin (BTC) hit an all-time high before plunging down by more than 50%, showing the correlation between Bitcoin and stablecoin activity on BSC or DeFi as a whole.”

According to the Nansen research team, “the average value of stablecoin transactions is a good indicator of the general capital/wallet size of BSC users.”

In April, PancakeSwap’s CAKE rallied over 120% and the total number of the token’s daily transactions flipped Ethereum.

At the same time, the value of stablecoin transactions worth $1million and above consistently accounted for more than 90% of total volume traded. 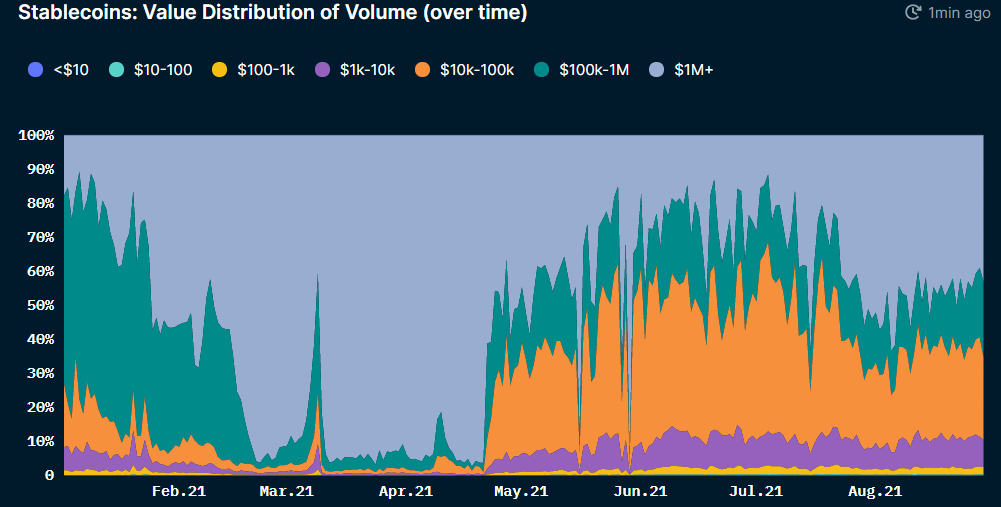 “This could possibly indicate that deep pockets or even “whales” were in action during that notable month for CAKE and BSC,” the Nansen research team pointed out in the report.